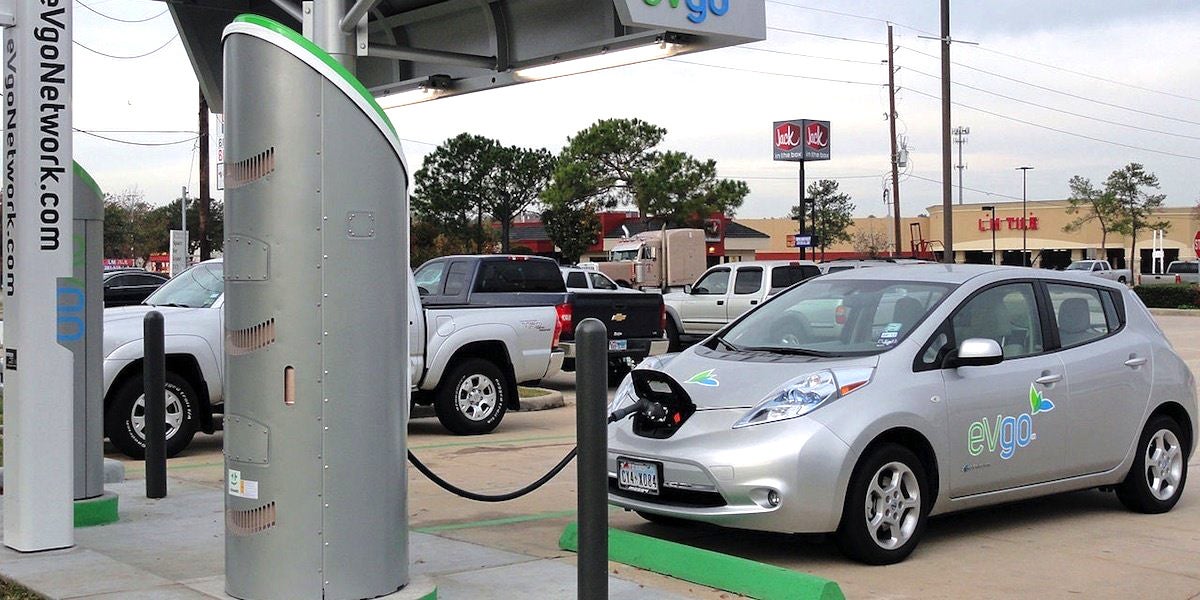 While
electric vehicles only make up a tiny 0.2 percent of passenger cars around the world, that number is growing, and growing fast. In 2016, there were 2 million EVs on the world’s roads, up from “virtually non-existent” in 2012. Nearly 200,000 electric vehicles were sold in the U.S. in 2017 alone, a new record.

This boom in electric car ownership has corresponded with growth in public charging infrastructure. EVgo, the largest public network of fast-charging stations in the U.S., charged 40 million miles of electric driving in 2017. That’s a dramatic increase compared to the 22 million EV miles charged in 2016.

The EVgo network increased by 20 percent last year, and now has more than 1,000 DC fast chargers across 66 markets nationwide. Network usage set a record with 1.1 million charging sessions, an increase of 50 percent.

Impressively, EVgo said that the 13 million kilowatt hours delivered from the network corresponded to 1.6 million gallons of gasoline saved and prevented the release of 9,000 metric tons of carbon emissions.

“2017 was an extremely successful year for EVgo, and not only did we add the 1,000th charger to our network, but we also delivered more fast charging power to EV drivers than ever before, with a resulting impact of 1.6 million gallons of gasoline saved,” said Cathy Zoi, EVgo’s CEO. “We are extremely pleased to see such rapid growth not only of our network, but also of EV sales across the board, and we are proud to be at the center of this rapid change toward a more electrified world.”

The company expects this growth to continue as more long range electric vehicle options come to market, and deliveries strengthen for EV’s such as the Chevy Bolt, 2018 Nissan Leaf and the Tesla Model 3.

Experts say that the rise of electric vehicles is all but inevitable. Within six years, the cost of owning an EV will be cheaper than purchasing and running a gasoline or diesel model, Bloomberg New Energy Finance
predicted.

However, one of the biggest roadblocks towards widespread adoption is the availability of public charging infrastructure. As the
Environmental Defense Fund recently pointed out:

“People are more likely to invest in plug-in cars once they feel confident they’ll always find a place to recharge their batteries away from home, and fast. In fact, the availability of public charging infrastructure is a leading factor in EV adoption.

But more and more companies—even ones you wouldn’t expect—are waking up to the electric car revolution.

Futurism reported that oil giant BP is investing $5 million in FreeWire Technologies, a U.S. manufacturer of rapid charging systems for electric vehicles. In November, Shell teamed up with IONITY (a partnership between BMW, Ford, Volkswagen and other automakers) to build a High-Power Charging network in Europe.

The Electric Vehicle Charging Association reported there were more than 50,000 charge points (public and private) in operation in the U.S. in 2017, up from 45,000 the year before. The organization also projects major growth for the industry over the next few years.

The switch away from traditional gas guzzlers couldn’t come soon enough. According to the International Energy Agency, in order to limit temperature increases to below 2°C by the end of the century, the threshold set by the Paris agreement, the number of electric cars will need to reach 600 million by 2040.

Are Electric Vehicles Finally Taking Off? Here's What You Need to Now https://t.co/F435eQsyFq @BusinessGreen @Ethical_Corp