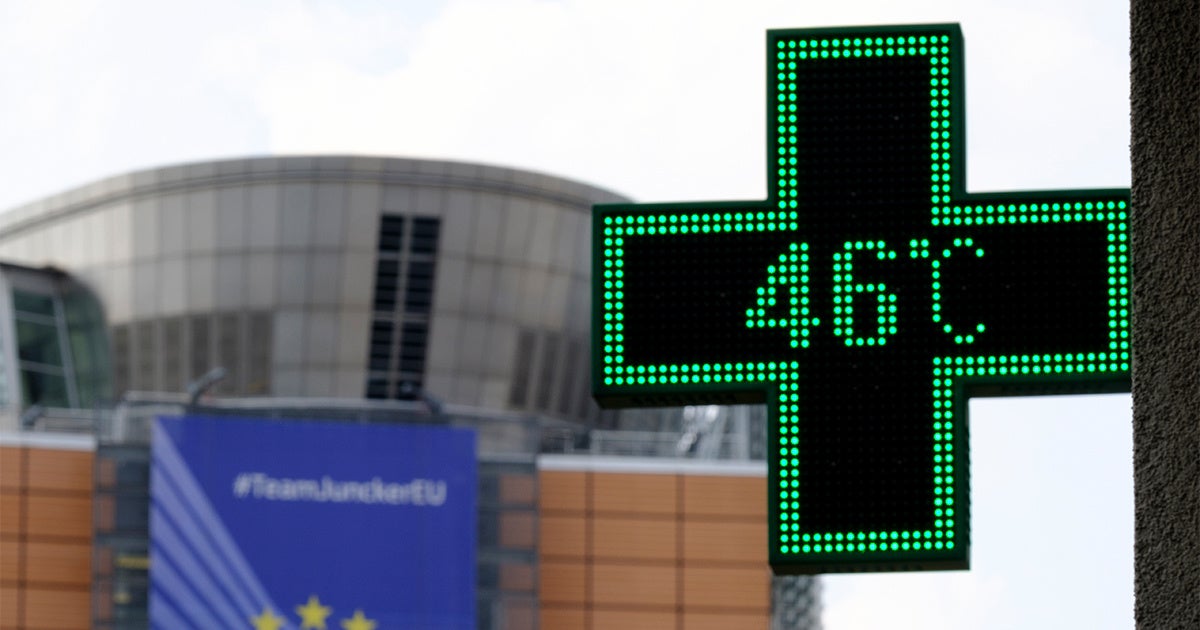 The street thermometer in front of the EU Commission headquarters shows a temperature of 46° Celsius (114° F), on July 25 in Brussels, as a new heatwave hits the Belgium capital. Thierry Monasse / Getty Images

The latest heat wave that crippled Paris with 109 degree Fahrenheit heat and saw the mercury hit 104 degrees Fahrenheit in the Netherlands and Belgium was caused by humans, according to a new study published on Friday, as the Associated Press reported.

“It is noteworthy that every heat wave analyzed so far in Europe in recent years (2003, 2010, 2015, 2017, 2018, June 2019, and this study) was found to be made much more likely and more intense due to human-induced climate change. How much more depends very strongly on the event definition: location, season, intensity, and durations,” the World Weather Attribution Group’s report explained, as Common Dreams reported. “The July 2019 heat wave was so extreme over continental Western Europe that the observed magnitudes would have been extremely unlikely without climate change.”

The group published this report, just one month after studying another European heat wave. The back-to-back heat waves are unusual and jarring. The report’s lead author sounded the alarm that this latest heat wave is a foreboding omen of what is coming down the pike.

“What will be the impacts on agriculture? What will the impacts on water?” said Robert Vautard of the Institut Pierre-Simon Laplace in France, as the AP reported. “This will put really tension in society that we may not be so well equipped to cope with.”

The record-setting temperatures in France and Germany smashed the previous highs by more than 2 degrees Celsius. The study concluded that without temperature rises due to the human-induced climate crisis, temperatures would have been 1.5 to 3 degrees Celsius lower, according to the AP.

“We find that it was much more extreme than any other heat wave we’ve looked at over the last few years,” said Jan van Oldenborgh of the Royal Netherlands Meteorological Institute, who contributed to the study, to Carbon Brief, as Common Dreams reported. “[It impacted] France, Luxembourg, Belgium, the Netherlands, Western Germany, Eastern England, and also parts of Scandinavia—and at the moment it’s inducing a large melting event over Greenland.”

This year’s heat wave was triggered by a slight movement in the Jetstream, which pulled hot air from North Africa across France and toward Scandinavia. That movement in the Jetstream is not so rare. What is odd is the extent of the warming temperatures, which ranked as a 50 to 150 year event where it peaked in France and Germany. However, if you take the same data and plug it into pre-industrial temperatures, the heat was a once in a millennium event, as Ars Technica reported.

An expert not connected to the study, Celine Bonfils of the Lawrence Livermore National Laboratory in California, told the AP that the findings are clear: “Record hot weather events are becoming more likely, and human-induced climate change is causing this increase in heat wave frequency.”