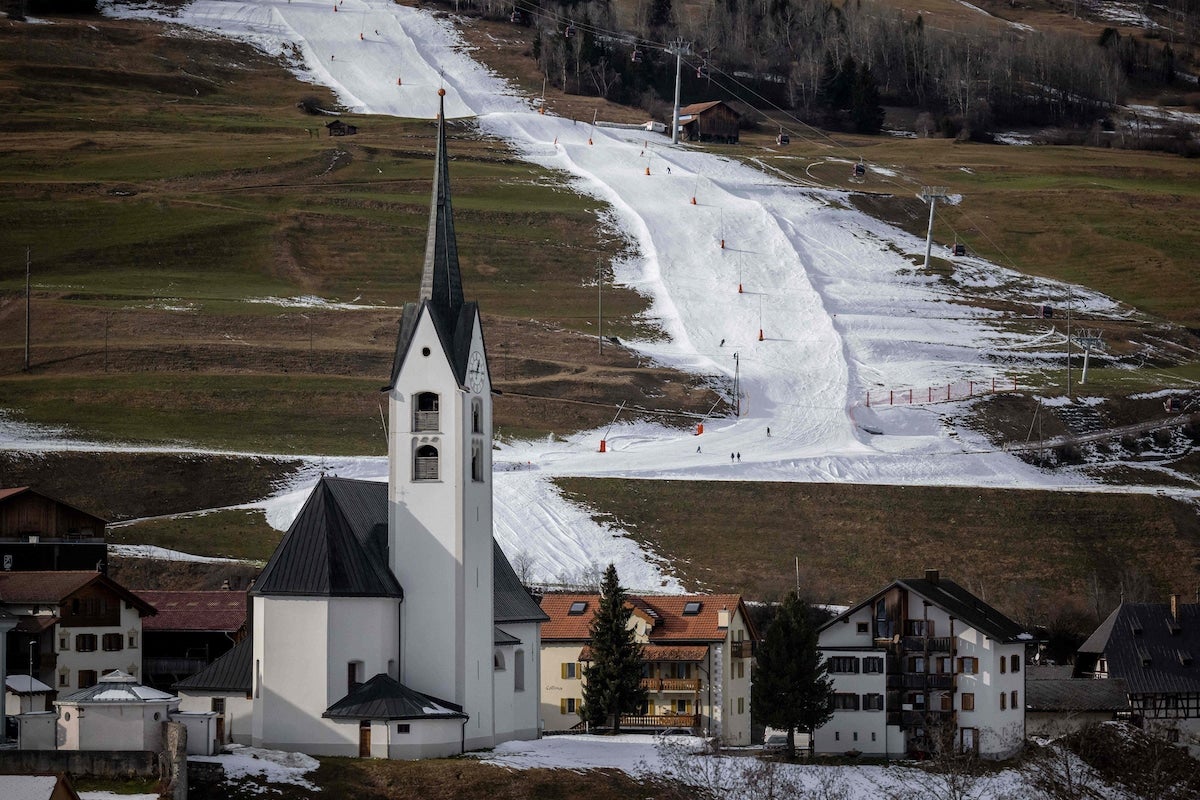 Nothing says winter like speeding down a snowy slope on a pair of skis then sitting beside a lodge fire with a cup of hot chocolate as the frosty scene outside fades from white to blue.

But for European ski resorts dealing with record January highs, this winter vision is another thing melting into the past as the climate crisis continues.

“By the end of the century (it’s) just going to be over… skiing in the Alps as we know it,” University of Brussels climate science professor Wim Thiery said, as Sky News reported. “In the future, these problems will get worse, because the snow will continue to melt as long as the climate warms.”

“We just observed the warmest January day on record for many countries in Europe,” meteorologist Scott Duncan observed on Twitter. “Truly unprecedented in modern records.”

Other countries have experienced regional highs, including Germany, France and Ukraine, as CNBC reported. Switzerland recorded temperatures of 20 degrees Celsius on Sunday, and Bilbao, Spain, reached 24.9 degrees Celsius. France saw its warmest end of December in 25 years, according to Meteo France, as Sky News reported.

The unseasonable warmth is melting snow at ski resorts in the Pyrenees and northern Alps, forcing them to close or come up with other alpine activities for tourists.

Half of France’s 7,500 ski slopes are closed because of “a lack of snow and a lot of rain,” managing director at national ski resort group Domaines Skiables de France Laurent Reynaud told CNN Travel.

“It’s clear one lift for bikes hardly compensates,” lift operator director Benjamin Mugnier told France 3 television, as The Guardian reported. “But at least it means we can offer clients something – they can ski a bit in the morning, and bike in the afternoon.”

Across the border in the Swiss Alps, resorts are also struggling. The Splügen resort in eastern Switzerland was previously considered safe because it is 1,500 meters (approximately 4,921 feet) above sea level. However, it still had to close Monday because of high temperatures, rain and lack of snow. The Swiss resort of Adelboden, meanwhile, said it would have to use artificial snow for most of a skiing World Cup event this coming weekend.

Resorts are hoping that conditions will improve later this winter, but they are also aware that the climate crisis is putting their industry in jeopardy in the long term. If nothing is done to reduce emissions, glaciers in the Alps could melt by more than 80 percent by 2100.

“I wish the future looked good but unfortunately, as an environmental activist, I am not very positive about the future,” Isa Castellvi, a ski and snowboard school manager at a Pyrenees resort, told CNN Travel. “I believe what climate change experts are saying. We are all seeing the evidence.”