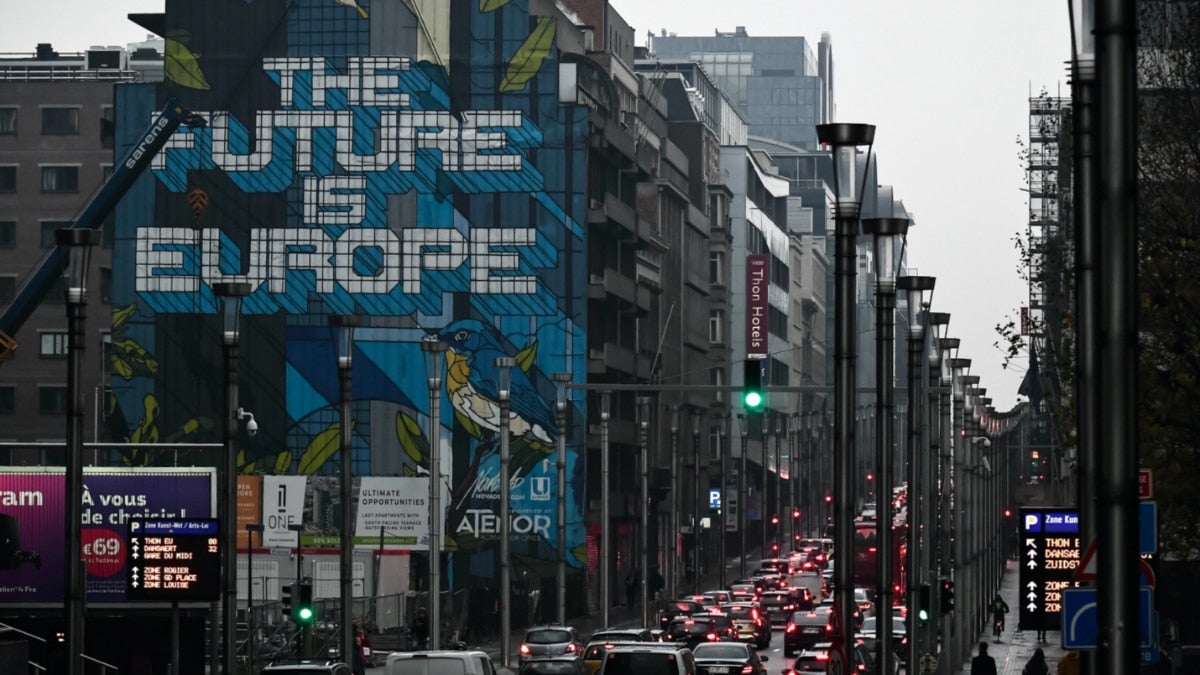 A mural reading "The future is Europe" is seen on a building outside the EU Headquarters in Brussels on November 24, 2018. Philippe Lopez LOPEZ / AFP / Getty Images

The strategy, approved by the European Commission, represents some of the most ambitious policy recommendations on the planet and draws a stark contrast with the United States, where endocrine-disrupting compounds—such as bisphenol-A (BPA), phthalates, certain flame retardants and pesticides—remain largely unregulated and ubiquitous in products and packaging.

Environmental health advocates hailed the effort as “the most transformative chemical policy initiative” in 20 years and a “once-in-a-decade opportunity to rethink Europe’s approach to chemicals management.”

“Every day, our exposure to cocktails of harmful chemicals is translating in real-life health conditions and diseases for current and future generations,” said Natacha Cingotti, senior policy officer for health and chemicals at the Brussels-based Health and Environment Alliance.

“While we welcome this significant step forward, the reality leaves no room for self-complacency and it is urgent the Commission gets to work to implement the promises made to effectively protect people from harm and support safe innovation for non-toxic material cycles.”

The new European plan, dubbed the Chemicals Strategy for Sustainability, is part of the broader Europe Green Deal, a sweeping proposal for the European Union to achieve carbon neutrality by 2050, eliminate pollution, and promote a sustainable economy.

At its core, the strategy makes use of the precautionary principle—forcing companies or manufacturers to prove chemicals are safe before they go to market, and making them pay when there is pollution.

While environmental and health advocates lauded the move, business interests cautioned it will stifle commerce and innovation.

“Production cycles and supply chains are complex … (and) not always well understood by decision makers,” wrote EuroCommerce, representing the continents’ retail and wholesale business sectors, in a position paper as the policy was being crafted this summer. “We ask the Commission to keep a close eye on the impact of individual initiatives, and its cumulative effects on the retail and wholesale sector and how it affects their economic viability.”

The Commission’s plan stands in sharp contrast to the United States. Despite decades of warnings from academic scientists, U.S. regulators have largely ignored independent, non-industry science about the dangers of chemicals that impact our hormones, often at very low doses.

Endocrine-disrupting compounds are a particular concern, based on science from research labs worldwide. The compounds—added to a broad range of products such as plastics, toys, cosmetics, food packaging—have been linked to myriad health problems, including birth defects, obesity, diabetes, certain cancers, as well as impacts to the brain and reproductive and immune systems.

The highest profile—and highest dollar— effort by the U.S. Food and Drug Administration to get on the same page of academic scientists and Europe on endocrine disruptor science has only deepened divides. An EHN investigation of the FDA’s effort on just one chemical, BPA, found the agency stacked the deck against findings from independent scientists studying BPA. It also found that many chemicals used to replace BPA in “BPA-free” products have the same adverse health impacts as the original chemical.

Also released Wednesday was an EU strategy that specifically takes aim at PFAS, compounds so persistent they’re called “forever chemicals.” PFAS, used in products including firefighting foam, non-stick cookware and some clothing, have been found in the water of roughly 2,230 U.S. communities in 49 states, affecting more than 100 million people.

The new European strategy would only allow for PFAS use when the chemicals are “essential for society.” In addition, it will fund research for safe alternatives and for monitoring and cleanup.

The framework stems from political guidelines laid out at the end of 2019 by European Union President Ursula von der Leyen that pointed Europe toward “zero pollution.”

The Commission plans to release a Zero Action Pollution Action Plan on air, water and soil next year to complement the chemicals strategy.