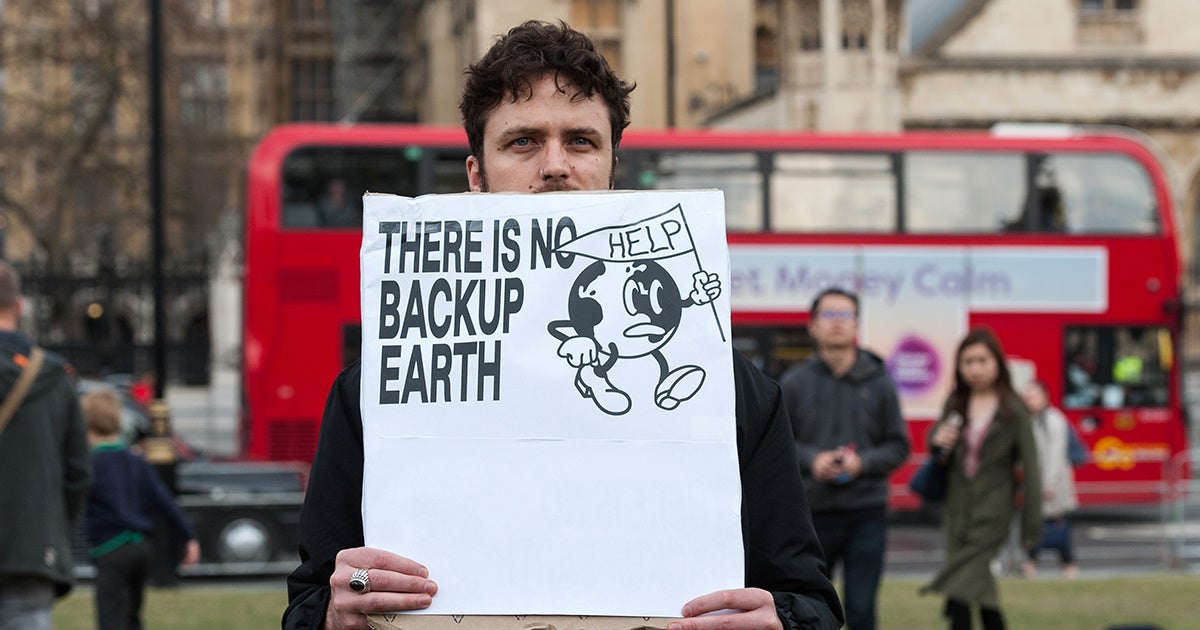 Environmental activists and campaigners from several organizations gathered in Parliament Square to protest against the governments lack of action on the climate change and destruction of the environment on May 1 in London. Wiktor Szymanowicz / Barcroft Media / Getty Images

Today is the day on which we would have exhausted Earth’s resources for the year if everyone lived like residents of the European Union (EU), according to a new report from WWF and the Global Footprint Network. The report, the first to focus on the EU specifically, calculated that if everyone consumed as much fuel, food, fiber, land and timber as Europeans, it would take 2.8 planet earths to sustain us all, The Guardian reported.

“EU Overshoot Day is a stark reminder that EU consumption is contributing to the Earth’s looming ecological and climate collapse. This is not only irresponsible, it is outright dangerous. Urgent action is needed, and EU leaders must summon the political will to treat this situation as an emergency and set us on a path towards a sustainable future for Europe,” WWF European Policy Office Director Ester Asin said, according to The Guardian.

If everybody lived as Europeans, we would need 2.8 planets 🌍🌍🌍. This year’s EU Overshoot Day happens on 10 May. #EUelections2019 offer the opportunity to #MoveTheDate. Read our newest report with @EndOvershoot here: ⏩ https://t.co/uwA0KoS9GB pic.twitter.com/ieSUm3baUq

The WWF calculates Earth Overshoot Day every year. That is the day at which the entire Earth exhausts its budget of natural resources, and it gets earlier every year. Last year, it was August 1. But it would be more than two months ahead of that if everyone lived like Europeans. The EU currently uses twice as many resources as its own ecosystems can sustain, the report found, according to BBC News. It makes up just seven percent of the earth’s population, but uses one fifth of its “biocapacity.”

“We are running a pyramid scheme,” Global Footprint Network Founder and President Mathis Wackernagel said, according to The Guardian. “Taking resources from the future to run today’s economy. It needs no reminder that this is risky for Europe’s prosperity. Choosing to deplete our future does not serve us.”

The EU’s resource overuse comes mostly through the burning of greenhouse gasses, but also from the import of products like palm oil, soy, cocoa and rubber that are made possible by deforestation in Latin America, Asia and Africa.

If the EU as a whole were a country, it would have the third largest ecological footprint in the world, behind only the U.S. and China. But the report also broke down the consumption of individual countries. Luxembourg, which relies heavily on coal, had an overshoot day 46 days into 2016. Romania’s was July 12. The overshoot day for the UK was May 17, a week after the average.

Our latest report with @EndOvershoot shows the EU’s ecological footprint is too large and not a single EU country is performing well. EU leaders must work together and prioritise a Sustainable Europe at #SibiuSummit to ensure we can live within the limits of #OurPlanet. pic.twitter.com/8GpKc8vjLG

A UK government spokesperson told BBC News that the country was committed to using resources in a more sustainable way.

“We want to leave our environment in a better state than we found it,” they said. “Our 25-year Environment Plan outlines steps to achieve this ambition and the forthcoming Environment Bill will put environmental ambition and accountability at the heart of government. We share the Global Footprint Network’s ambition to push back Overshoot Day.”

The report comes two weeks before the European Parliament elections and, in the report, WWF urged EU leaders and political representatives to take the following actions to reduce Europe’s footprint:

1. Shift to sustainable consumption and food systems
2. Make Europe climate-neutral by 2040
3. Restore our nature
4. Protect the Ocean
5. Invest in a sustainable future

It also called on the European Parliament, European Commission and European Council.to endorse a European Sustainability Pact following the elections, with goals like fighting climate change and investing in sustainable sectors.