Without much fanfare on this side of the Atlantic, the European Union is actively and effectively pushing back on one of the biggest bullies in the corporate sandbox, Monsanto.

This week in Brussels the European Parliament’s Environment and Agriculture committees will hold a public hearing on The Monsanto Papers, documents released through lawsuits in the U.S. brought against Monsanto by over 250 people alleging that exposure to Roundup herbicide is responsible for their cancers.

The papers show a disturbing pattern of scientific misrepresentation, data manipulation and collusion with government officials. The hearing is called, ‘The Monsanto Papers and Glyphosate‘ (11 Oct 9-12:30, AGRI/ENVI joint hearing) and will be live web-streamed starting at 3 a.m. EST (agenda here). 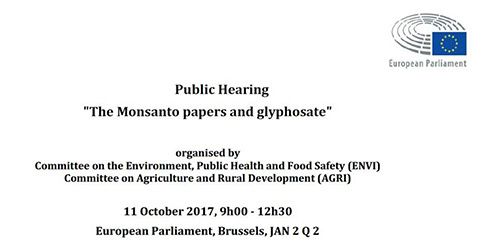 Monsanto was invited to testify at the hearing and to explain itself, but chose to skip the event, on the grounds that it would be political and Monsanto argues that the issue is purely scientific. In response, the EU Parliament banned Monsanto lobbyists from entering the parliament. AgroNews noted that this will be a setback for the multinational corporation, which spent €300,000-€400,000 lobbying in Brussels in 2015-2016 (about $450,000 USD), presumably to exercise its influence over the political process.

The European Commission (EC) is the executive branch that proposes and implements legislation and represents European interests. It implements the decisions of the European Parliament, which represents the citizens, and the Council of Ministers, which represents the national interests of the 28 member states. The Parliament is holding the hearing, but the Commission will hold the vote in November or December on whether to approve continued use of glyphosate.

How did Monsanto get itself into this pickle?

The World Health Organizations’ (WHO) cancer assessment arm, the International Agency for Research on Cancer (IARC) reviewed toxicity studies in lab rodents linking glyphosate to cancers. There were also publicly available epidemiologic studies linking the formulated product, Roundup, to cancers and DNA-damage in exposed workers. IARC did a full scientific review, concluding in March 2015 that glyphosate, the main ingredient in Roundup, was “probably” carcinogenic to people (Group 2A), based upon three lines of evidence: “sufficient” evidence of cancer in mice and rats that were fed glyphosate over a several years; “strong” evidence from mechanistic or cellular studies that explain how glyphosate may cause cancer; “limited” evidence from epidemiologic studies of people, particularly pesticide applicators and farmworkers.

Monsanto strongly denies the IARC conclusions, and continues to argue that its highly profitable weed killer is “safe.” Nonetheless, IARC’s cancer assessment sparked a Monsanto-fueled firestorm of product defense activities in both the EU and the U.S.:

Monsanto at EFSA – Stepping into line with much the same talking points as Monsanto, the European Food Safety Authority (EFSA) gave its blessing to glyphosate (November 2015). But now we know that its report largely came from Monsanto; using a combination of manual and automatic text comparison software, the risk assessment authored by the German Federal Institute for Risk Assessment (BfR) that formed EFSA’s final report proved to be plagiarized from Monsanto. Based on the 2015 EFSA approval, the European Commission was set to renew its approval of glyphosate for another 15 years, as has been the normal routine in the past. However, following public outcry over cancer risks, the approval failed to garner support from enough countries so in June 2016 the Commission instead gave approval only for a limited extension until the end of this year, December 15, 2017. The Commission is expected to hold a vote later this year (November or December 2017).

Monsanto at JMPR – The European Joint Food and Agriculture Organization (FAO)/WHO Meeting on Pesticide Residues (JMPR) also declared glyphosate unlikely to pose a cancer risk to people from exposures through the diet (food and water) (JMPR May 2016). NRDC identified JMPR members with financial ties to the pesticide industry, making the committee biased and conflicted.

Monsanto at U.S. EPA – The U.S. Environmental Protection Agency (EPA) also fell in behind Monsanto, with its October 2015 Cancer Assessment Review Committee (CARC) proposing to classify glyphosate as “not likely to be carcinogenic to humans” (CARC 2015). The head of the committee that issued the report, Jess Rowland, was subsequently shown to have a too cozy relationship with Monsanto. In an internal Monsanto email released as part of the litigation ‘Monsanto Papers’ Rowland bragged to Monsanto in an April 2015 telephone conversation that he deserved a medal if he could kill an investigation by another federal agency (ATSDR) into the cancer risks of glyphosate. That investigation was subsequently abandoned (see Bloomberg News 2017; USRTK.org). Monsanto’s regulatory liaison wrote in a 2015 email that Rowland, “could be useful to us as we move forward with ongoing glyphosate defense.” Rowland has since left EPA. The EPA Inspector General launched an investigation into possible collusion between EPA employees and Monsanto (May, 2017).

U.S. EPA continues to defend glyphosate, issuing a report in September 2016 that also proposed that glyphosate was “not likely” to cause cancer in humans. Scrutiny by the EPA Scientific Advisory Panel in December 2016 gave EPA’s proposed classification a mixed review, with some recommending that it should be more protective (suggestive evidence of cancer) and all members agreeing that EPA failed to follow its own Cancer Guidelines (SAP final report, March 2017)—NRDC also made these recommendations in scientific comments to the SAP. Unfortunately, the Pruitt-Trump EPA has thus far left the proposed “not likely” classification in place, with a final determination expected by the end of this year.

Monsanto and U.S. Congress – Earlier this year, January 2017, U.S. Congressional Republicans launched an investigation into IARC’s review of glyphosate, which appears to be laying the groundwork for Republican-led efforts to cut U.S. funding for IARC. The drumbeat has been picked up by chemical manufacturer lobbyists (ACC), and even press outlets including Reuters reporting on Monsanto talking points.

Monsanto in California – Monsanto launched an unsuccessful legal challenge to block the California Office of Environmental Health Hazard Assessment’s proposal to add glyphosate to the Proposition 65 list, following the IARC determination that glyphosate poses a cancer risk. Monsanto disagreed with California voters’ choice to make IARC findings an independent ground for adding carcinogens to the Proposition 65 list and challenged it as unconstitutional. The court rejected Monsanto’s arguments. NRDC and others successfully intervened in the case, alongside California (March 2017).

But the steady drip, drip, drip of the documents coming from the lawsuit against Monsanto continues to put the company, and its defenders, including EPA and EFSA, in an increasingly awkward and untenable position. Let’s hope that European legislators and the public get sufficiently fed up with Monsanto’s methods and take serious steps to restrict or eliminate Roundup’s use. This would have a potentially profound effect upon glyphosate-related policies here in the U.S., where EPA appears to still be taking its cues from Monsanto.

The European Parliament’s hearing across the pond may be the next step in the dismantling of Monsanto’s almost universal wall of support from regulatory agencies around the globe. Eventually, the truth will win out. Stay tuned!

Jennifer Sass is a senior scientist in the Health and Environment program of the the Natural Resources Defense Council.