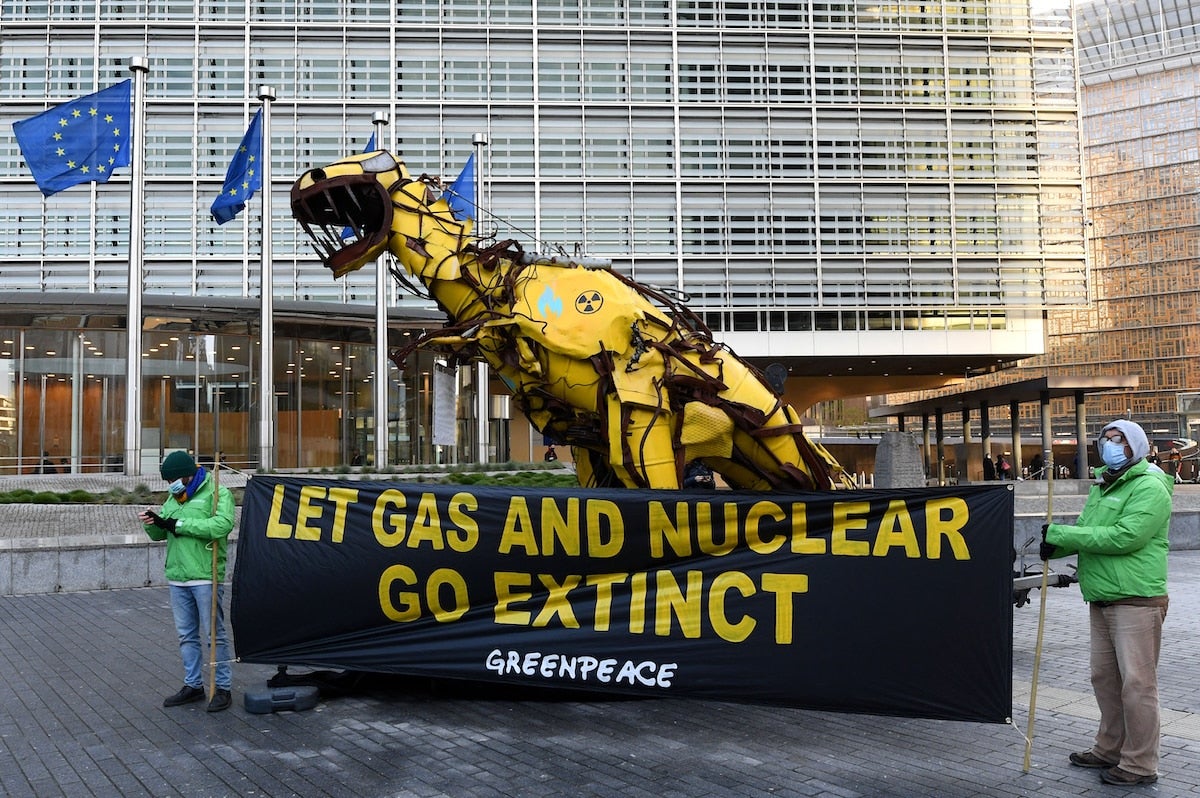 A statue depicting a dinosaur painted with radioactive symbols and blue gas flames is displayed by Greenpeace activists outside the European Commission headquarters in Brussels, in protest against the inclusion of fossil gas and nuclear energy in the EU's list of sustainable investments, on Dec. 7, 2021. JOHN THYS / AFP via Getty Images

In a setback for the fight against climate change, 328 of 639 members of the European Parliament (MEPs) have voted in favor of plans to label investments in gas and nuclear power plants as “green,” reported Reuters. Unless 20 of the 27 European Union (EU) member states oppose the proposals adopted by the European Commission in the Complementary Delegated Act, they will pass it into law.

This means that some nuclear and gas projects would be added to the EU taxonomy of economic activities that are considered environmentally sustainable, with some conditions, The Guardian reported. Investors would then be able to label and market investments in the gas and nuclear projects as green, reported Reuters.

Experts said the vote sets a dangerous precedent for other countries, according to The Guardian. Ukraine, as well as climate activists, had appealed to parliament to reject the proposals, saying they would be beneficial to Russian president Vladimir Putin.

“This will delay a desperately needed real sustainable transition and deepen our dependency on Russian fuels,” said environmental and climate activist Greta Thunberg on Twitter.

The proposals allow investments in gas-powered projects to be designated as sustainable as long as “the same energy capacity cannot be generated with renewable sources” and there are plans to transition to renewable sources or gases that are considered “low-carbon,” The Guardian reported. Nuclear power can be classed as renewable if a project pledges to take care of its radioactive waste.

European Commissioner for Financial Stability, Financial Services and the Capital Markets Union Mairead McGuinness said the proposals adopted in the Complementary Delegated Act “ensure that private investments in gas and nuclear, needed for our energy transition, meet strict criteria,” as reported by The Guardian.

“By clearing the way for this delegated act, the EU will have unreliable and greenwashed conditions for green investments in the energy sector,” said Dutch MEP Bas Eickhout, who is the vice-president of the European Parliament’s environment committee, as reported by The Guardian.

Austria and Luxembourg, which don’t support nuclear energy or putting a “green” label on gas, vowed to fight the law.

Greenpeace also said it would contest the law in court.

“I am in shock. Russia’s war against Ukraine is a war paid for by climate-heating fossil fuels and the European parliament just voted to boost billions of funding to fossil gas from Russia. How in the world is that in line with Europe’s stance to protect our planet and stand with Ukraine?” said Ukrainian climate scientist and member of the Intergovernmental Panel on Climate Change Svitlana Krakovska, as The Guardian reported.

Europe’s Largest Battery Storage System Goes Live in UK
As the UK braces for the first full winter since
By Olivia Rosane
Innovative Company Wants to Drill 10 Miles Down to Replace Fossil Fuels With Geothermal Energy
Usually when we think of drilling beneath the Earth’s surface
By Olivia Rosane
Arctic Carbon Transportation Route Discovered by Scientists
In the Arctic, a previously unknown carbon transportation route has
By Cristen Hemingway Jaynes