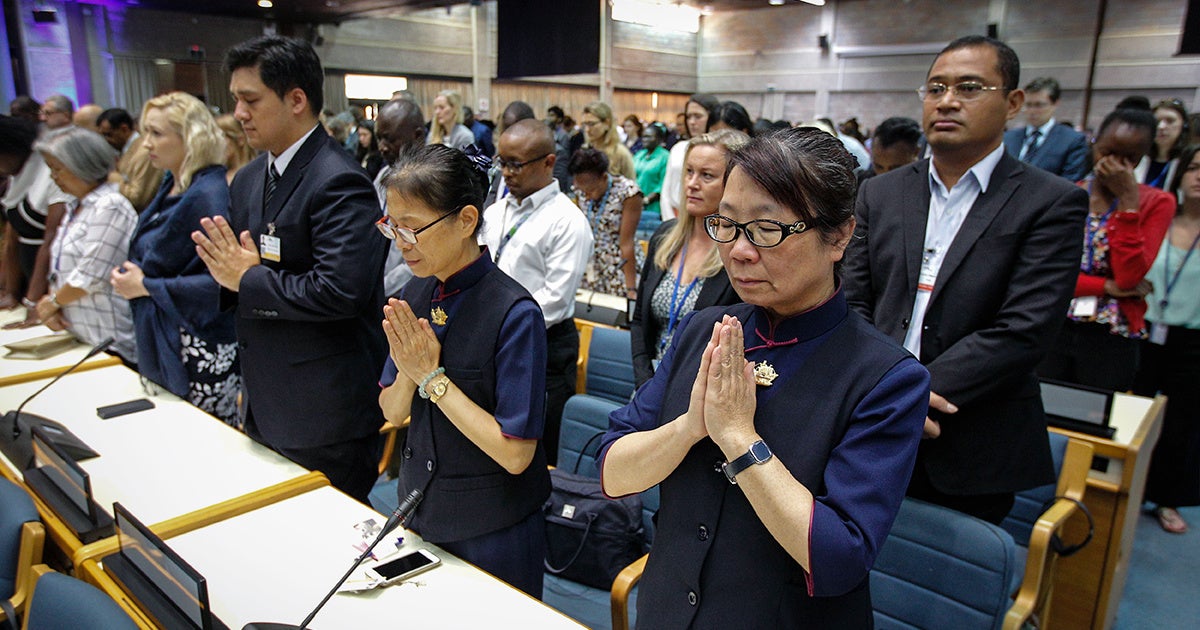 UN Staff observe a minute of silence for the victims of the accident of the Ethiopian Airlines, including 19 UN workers, before the opening plenary of the 4th UN Environment Assembly at the UN headquaters in Nairobi, Kenya, on March 11. UNEP / C. VILLEMAIN / AFP / Getty Images

The Fourth UN Environment Assembly began in Nairobi Monday with a moment of silence for the victims of the crash of Ethiopian Airlines ET302 that killed 157 people on Sunday, including 22 UN staff members, the UN Environment Program (UNEP) reported.

Some of those killed in the crash has been traveling to the assembly, which is the largest ever gathering of the world’s top environmental decision-making organization. Among the dead were youth delegates, scientists and academics, UN Environment Acting Executive Director Joyce Msuya said in a statement.

“The environmental community is in mourning today,” Msuya said.

The environmental community is in mourning today. As we begin the fourth UN Environment Assembly in Nairobi, we came together to remember those we have lost in the crash of the Ethiopian Airlines flight. https://t.co/DEIWdW2tQt pic.twitter.com/WoVagVvxlS

The deadly crash occurred minutes after the plane took off from Addis Ababa in Ethiopia Sunday morning en route to Nairobi, The Guardian reported. Everyone on board was killed. The tragedy raised safety concerns about the plane’s model, a Boeing 737 Max 8, a new design that was involved in a similar crash in Indonesia in October 2018.

A UNEP staff member told AFP that the agency was “still trying to consolidate” the number of UN workers who had died.

“He represented the best in all of us, and we will miss him terribly,” a UNEP statement said.

.@UNEnvironment is devastated to announce the loss of our dear friend and colleague Victor Tsang in the crash of the Ethiopian Airlines flight. Victor was our champion of gender and the SDGs. I cannot begin to express how much he will be missed. https://t.co/I7NwfOqnhD

The tragedy cast a pall over the opening proceedings. The UN flag was lowered to half-mast, and the country flags were removed, UNEP reported.

“In the wake of this tragedy, it has been difficult to navigate how to proceed without showing disrespect to the many lives lost yesterday,” Acting Director-General of UN Office in Nairobi and Executive Director of UN-Habitat Maimunah Sharif said. “I want to assure you all however, that as the day and week unfolds, and the world’s global environmental leaders meet to discuss the future of our planet, we will not forget this tragedy, nor those that perished with it.”

Opening of #UNEA4 by Minister Siim Kiisler & my colleague to be @JoyceMsuya. A sad day following yesterday’s terrible news. News that make us all the more determined to work for #planet and people. #SolveDifferent pic.twitter.com/GYLBXMTP9H

As the assembly began, one major theme to emerge was the need to address plastic pollution, AFP reported. The world currently produces more than 300 million tonnes (approximately 331 million U.S. tons) of plastic every year, and scientists say at least five trillion pieces of it are floating in the oceans. The UN wants countries to set ambitious targets to reduce plastic manufacturing and phase out single-use plastics by 2030, in an effort modeled after the Paris agreement to limit global warming to well below two degrees Celsius above pre-industrial levels.

“In the field of (plastic) pollution we don’t have such agreements,” UN Environment Assembly President and Estonia’s Environment Minister Siim Kiisler told members of the press, as AFP reported. “This is the first time (we have) to convince member states to make international commitments.”

Msuya urged delegates to be “optimistic and bold” and work towards the goals of reducing fossil fuel use by 80 percent and creating an almost zero waste economy, both by 2050, according to UNEP.

“[We need to] transform the way our economies work … break the link between growth and increased resource use, and end our throwaway culture,” Msuya said, as AFP reported.