Ethiopia, Where the Paris Climate Agreement Gets Real 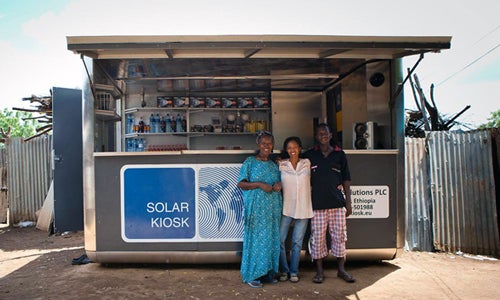 The same day global leaders were gathering at the United Nations in New York to sign an historic climate agreement, my family and I stood in front of a tiny solar-powered trailer on the side of a dusty, dirt-packed road in southern Ethiopia.

The tiny SolarKiosk, nestled near traditional thatched huts and surrounded by cows and goats, sells different-sized solar lanterns, as well as power for mobile phones and bottles of Fanta. 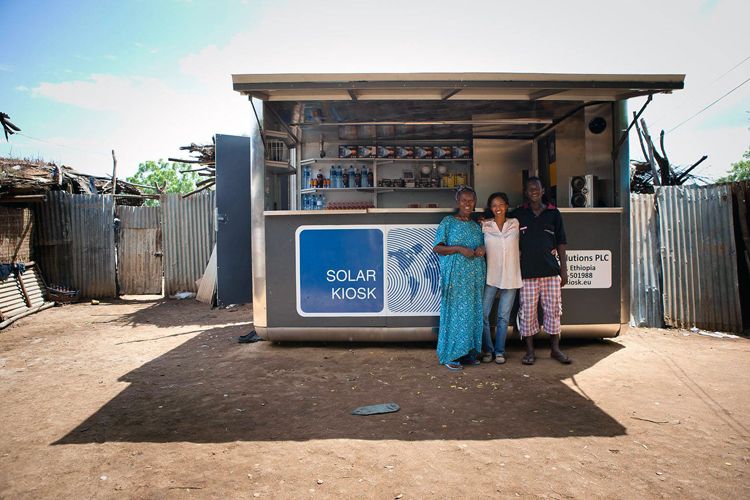 The Omorate SolarKiosk operator, Masresha (right), with his mother (left). He has worked as a local guide and speaks five languages. Photo credit: © Georg Schaumberger / SolarKiosk

The people we met here were not thinking about global climate deals brokered in Paris. But villages, such as Bulbula, and countries, such as Ethiopia, are surely in the minds of government leaders assembling at the UN to ink a 32-page document that is our last great hope for curbing global carbon pollution at the levels needed to avoid dangerous climate change.

The Paris agreement is undoubtedly big on ambition; more than 170 countries signed the accord last week and most, including Ethiopia, have also committed to their own carbon pollution reduction plans. The big question is whether countries such as Ethiopia, India, China and even the U.S. can deliver on their promises so that the agreement can achieve its ultimate goal of limiting global temperature rise to well below two degrees Celsius.

While Ethiopia’s current carbon footprint is tiny compared to developed countries, what happens down the road, as its economy grows, is a big question. The country’s commitment—to be carbon neutral, even as its lifts 25 million people out of poverty, by 2025—is wildly ambitious. The fact that its population is soaring and that most rural communities still lack electricity—and need it—only adds to the challenge.

Six days of dusty, bumpy driving in southern Ethiopia makes clear that the country’s economy is booming. Construction is everywhere: most of it in the form of partially built paved roads and concrete building shells with the ubiquitous eucalyptus-tree scaffolding. Further back from the roads, there are dozens of vast flower greenhouses and garment factories—key reasons why exports and the overall economy are growing at double-digit rates every year.

But it wasn’t until day seven, roughly 1,200 kilometers in our trip, that we saw our first sign of clean energy. Just north of Lake Langano we came across the SolarKiosk. Within seconds of pulling over, we were surrounded by dozens of villagers who were eager to talk about the solar shop’s offerings, especially its portable lanterns that have transformed their lives.

The solar-powered kiosk, operated by a German firm and one of 31 in Ethiopia, provides power for solar lighting, mobile phones, batteries and even computers. It also sells a few varieties of solar lanterns, starting as low as $12 (basic lamp) and $25 (a lantern with a USB charger) up to as high as $150. Most villagers are using the small lamps, with a hand-sized solar panel, which provides six hours of light after every charge. 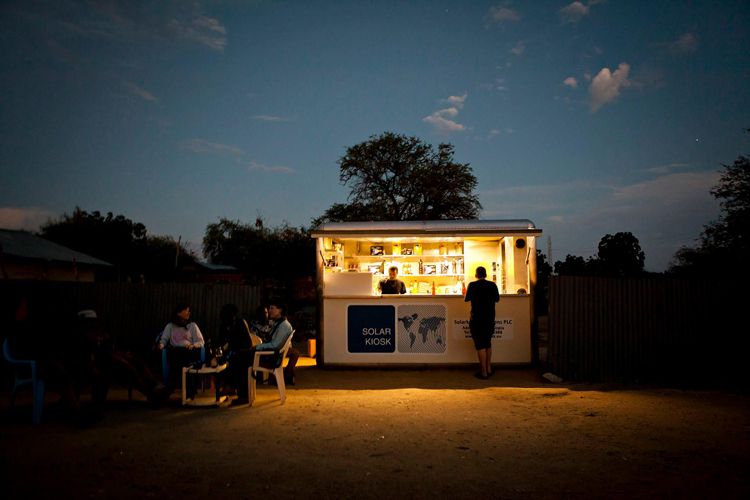 The SolarKiosk provides the rare source of light once the dusk starts setting in. This Solarkiosk is in Turmi, Gamo Gofa, Ethiopia. Photo credit: © Georg Schaumberger / SolarKiosk

Midhasso Hordofa, a subsistence farmer, has been using a small lamp for the past two years and the biggest benefit he mentions is charging his mobile phone.

Alima Badhsoo, whose husband runs the kiosk, has two lamps and she cites wide-ranging perks, including nighttime light so her oldest son can study and being able to “chase away hyenas” when they get too close.

The kiosk was the first in what is now more than 150 solar stands SolarKiosk is operating across Africa, most of them in rural areas where electric grids do not exist, says the company’s general manager Roger Sobotker.

While Sobotker could not cite exact sales figures in Africa, he says the response has been strong, with many customers “graduating” to bigger solar systems which can charge even computers and TVs. “We bring a bouquet of services—entertainment, access to the Internet, new products—which undoubtedly assist in arresting the migration of people to the city,” he said.

SolarKiosks are an important contribution, for sure, but larger-scale solutions will obviously be needed, too, for Ethiopia to achieve its carbon-neutral commitment. Indeed, utility-scale projects—especially hydroelectricity and geothermal—are taking hold in many parts of the country—the most noteworthy being the Grand Renaissance Dam and hydro project near the headwaters of the Blue Nile River which flows to Egypt. Slated for completion next year, it will be Africa’s largest hydro project, providing 6,000 megawatts.

During the time of our visit, in fact, an Icelandic company announced an MOU with the Ethiopian government to generate 1,000 megawatts from geothermal reserves near the southern Ethiopian town of Shashemene. The developer, Reykjavic Geothermal, plans to invest $4 billion in the project and signed the first power purchasing agreement in Ethiopia’s history.

The agreement was made possible by a new—and hugely important—national law allowing private developers to generate and sell power to Ethiopian electric utilities.

We can only hope to see progress on more of these projects the next time we visit Ethiopia.