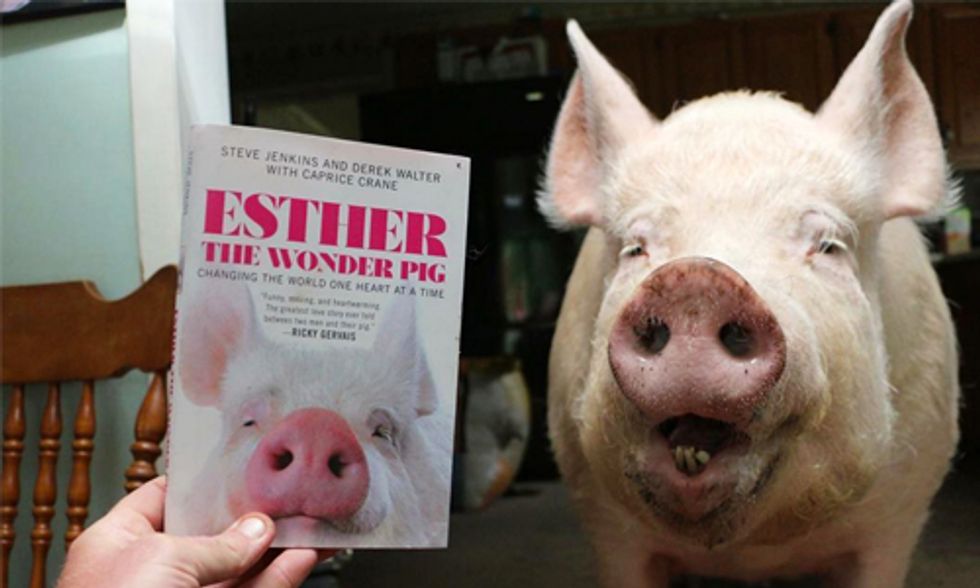 “I have a mini pig that is not getting along with my dogs.”

It was a simple Facebook message that sparked a chain of events that would forever change the lives of a Toronto-based real estate agent, his partner and millions of others around the world.

When Steve Jenkins received this note on social media from an old friend about wanting to find a new home for a companion pig, he was filled with glee. He and his partner, Derek Walter, already had two dogs and two cats living at home and Jenkins figured that a pig who would grow no bigger than a canine would fit right in. But as Jenkins and Walter would eventually come to learn, the tiny porcine they named Esther was not a mini-pig as advertised but, rather, a commercially bred sow who would soon weigh more than 600 pounds.

"This story is one of overcoming fear, and learning to love freely. Their quest for doing the right thing is inspiring. I laughed and cried along with them, and fell for Esther and her antics all over again. If you're not inspired to do something good after reading this book, then read it again." -L. Karam (via Amazon) If somebody asked us what we hoped to achieve with our book, this reader review would sum it up perfectly. We're so glad the message is coming through. Kindness is magic, and a smile can change the world. The fact that we even wrote a book still seems very surreal, and will likely take some time to get used to. The fact that you helped us make it a "National Best Seller", well that's gonna take even longer. It's overwhelming. Thank you so much for reading it, and thank you again for sharing your reviews with us. We're so happy you're enjoying it. https://www.amazon.com/Esther-Wonder-Pig-Changing-World/dp/1455560782/ref=cm_cr_arp_d_product_top?ie=UTF8

Bringing a farmed animal into a suburban home is no easy task, requiring a change not only in furniture but also of heart. Esther the Wonder Pig: Changing the World One Heart at a Time, written by Jenkins and Walter with Caprice Crane, recounts the couple’s evolution from being meat-eaters (who happened to have a pig) to becoming animal activists.

“I’d always thought I was a huge animal lover. But suddenly I felt very misled,” Jenkins recalls about making the connection between the pig he loved and the millions of other pigs who are slaughtered. “I was angry about what we’d been told, how we’d been made to believe ‘they’re just farm animals.’”

Throughout Esther the Wonder Pig, readers learn of Esther’s vibrant personality and it’s impossible to miss that the only difference between her and other commercially bred pigs is that she was given a chance. Reading this book will certainly be an eye-opening experience for someone who is not very familiar with animal agriculture and farmed animals.

It’s also eye-opening to learn just how challenging it is to raise a pig who outgrows her litterbox every few weeks. You will surely laugh as Esther figures out new and exciting ways to flip over her water bowl and will feel for her dads as they clean up torrential floods of pig urine. Jenkins points out that one of the reasons why he and Walter first started doing interviews about Esther was because they wanted to caution anyone else from adopting a pig, as pigs are so often returned to shelters—or subjected to worse fates—when they become problematic.

Getting up to no good with my best friend. That's what weekends are for.

But Jenkins and Walter wouldn’t change their new life for anything. Thanks to what they term the “Esther Effect,” the two have grown into farmed-animal rescuers and committed vegans—there’s even a recipe section, full of ideas for tasty vegan meals, at the end of their memoir.

And if you have read PETA’s interview with Jenkins and Walter or are one of this wonder pig’s nearly 700,000 Facebook followers, you just might have experienced the “Esther Effect” yourself! From her refusal to drink any water that’s not sweetened with juice to her fierce determination to see what’s behind the freezer door, Esther demonstrates a personality that’s loud and proud and from her, many humans have learned just how intelligent, loving and inherently worthy of life pigs really are.

Esther truly is changing the world, one heart at a time.