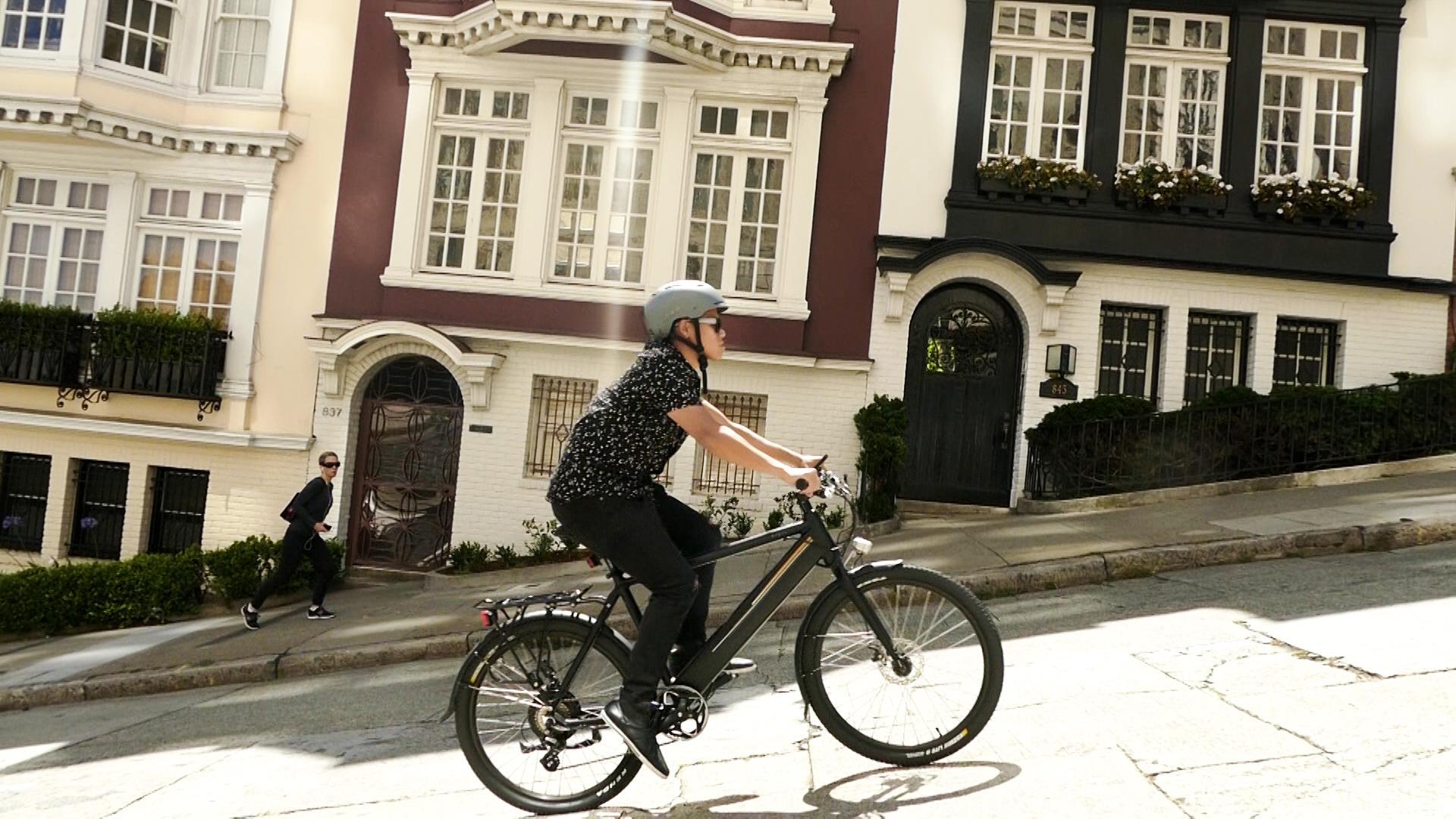 Call me lazy, but one of my favorite things about
electric bikes is that you don’t have to work very hard to get very far. For throttle operated e-bikes—where you twist the grip like a motorcycle or continually push a button for some juice—you can cruise as long as you hold onto the throttle. Of course, for lazy people like me, the throttle can be too tempting to not use.

For that reason, I’ve really been enjoying
Espin‘s pedal-assisted e-bike that’s designed specifically for commuter biking. The San Francisco-based startup sent me their “Flow” model to test-ride for two weeks, and what I like best is how it not only looks like a regular bike, it also gives you a bit of a workout like a regular bike. 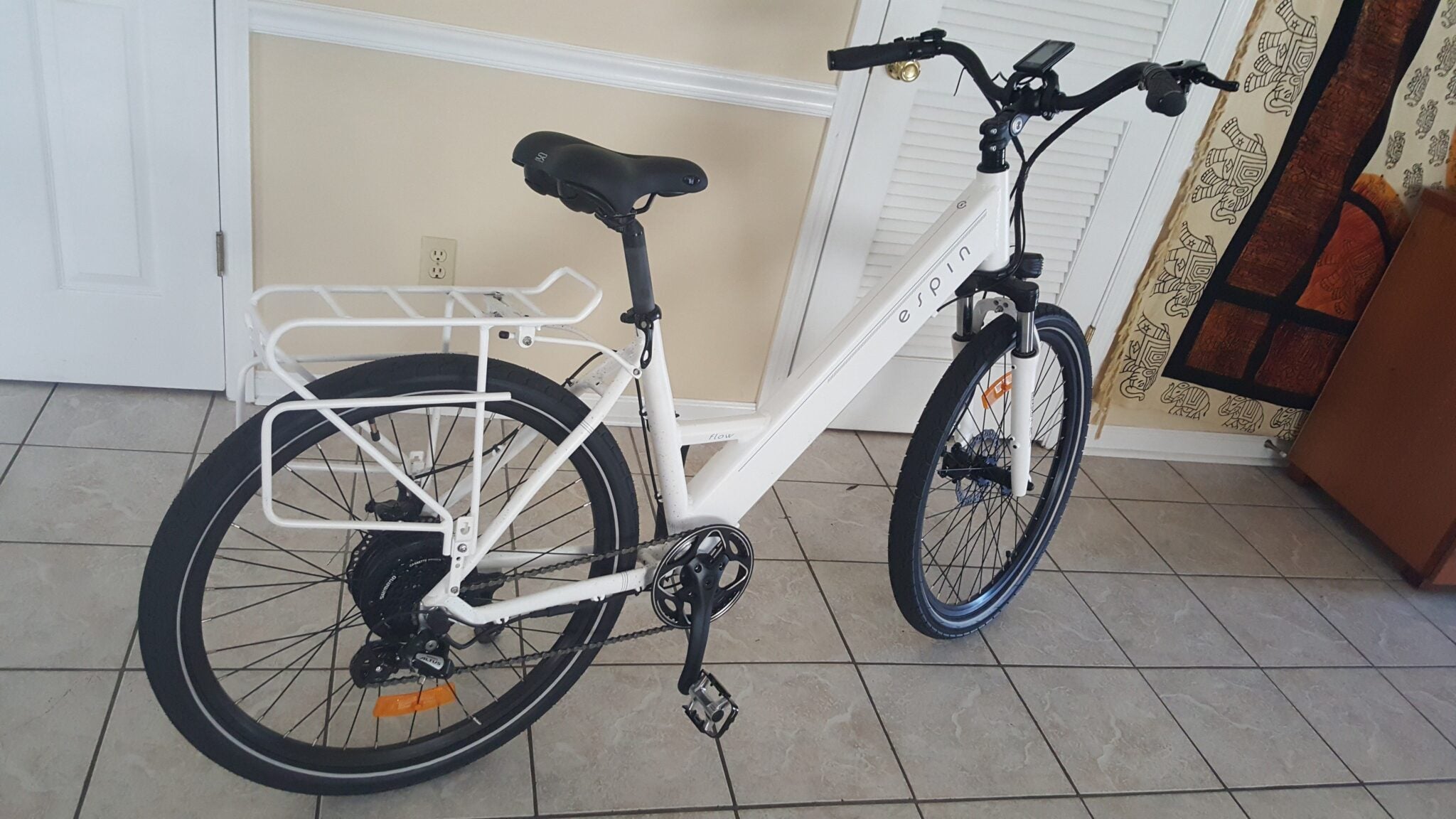 Espin’s Flow is an e-bike that does not look like an e-bike.

Don’t get me wrong—the Espin is fast, powerful and you’re unlikely to break a sweat even as you reach speeds of up to 25 miles per hour. The more I pedaled, the faster I zoomed along, making it an addictive and exhilarating ride. Most people couldn’t even tell it was electric.

The Espin has assist levels from 0-5, with the higher numbers giving more oomph. A zero rides like a traditional two-wheeler while a 5 lets you zoom around and even tackle hills. The assist lasts for about 2 seconds after you stop pedaling.

An easy-to-read control hub displays distance, speed and battery life. By holding down the central power button on the left handlebar, you can switch on a powerful LED light allowing for night-time rides.

I was very impressed by the bike’s 418 Watt-hour lithium ion battery which can be entirely removed with a key and plugged into a wall. So if the battery dies while you’re on the road you can just remove the battery and maybe plug it into, say, a coffee shop outlet and wait while it charges. The battery is hidden in the middle of the bike’s aluminum alloy frame, making it look more like a regular bike. It takes about about 4.5 hours to fully charge, but in the two weeks that I’ve intermittently ridden the bike, I haven’t had to recharge it a single time. The company says the Espin has a range of 25-50 miles on a single charge. The battery is expected to last about 2-4 years or around 500 charge cycles.

Here’s another cool thing—and it came via fluke. My boyfriend, on a ride home on the bike from the bar, took a jump on a ramp and caused the chain to slip off. Much to his amazement, the assist still worked without a functioning chain and he zipped all the way home without any pedaling.

“That’s a feature I would pay for any day,” he said.

“Espin was created out of necessity. When we first came up with this idea, we were struggling to find a performance eBike for ourselves that would be great for getting to work, but also looked stylish and didn’t break the bank,” said
Josh Lam, co-founder of Espin, in a statement. “Many eBikes have a bulky battery and have high price tags. We knew there was a better way to create something that people could afford and really consider as their daily ride. We put form and function together to make a cool, stylish, affordable bike that happens to be electric. No more sweating on rides to work!”

My one criticism is the assembly process. While the company touts that the bike can be put together in less than 15 minutes, it took a friend and me several hours to assemble. That being said, the company was helpful with my questions and linked me to an online tutorial.

Some other specs include a rear-mounted luggage rack, 350 watt motor output and 45 Nm torque. The Espin also comes in a sleek “Sport” model. Both the Flow and Sport are available in black and white. A $300 discount is also going on right now.