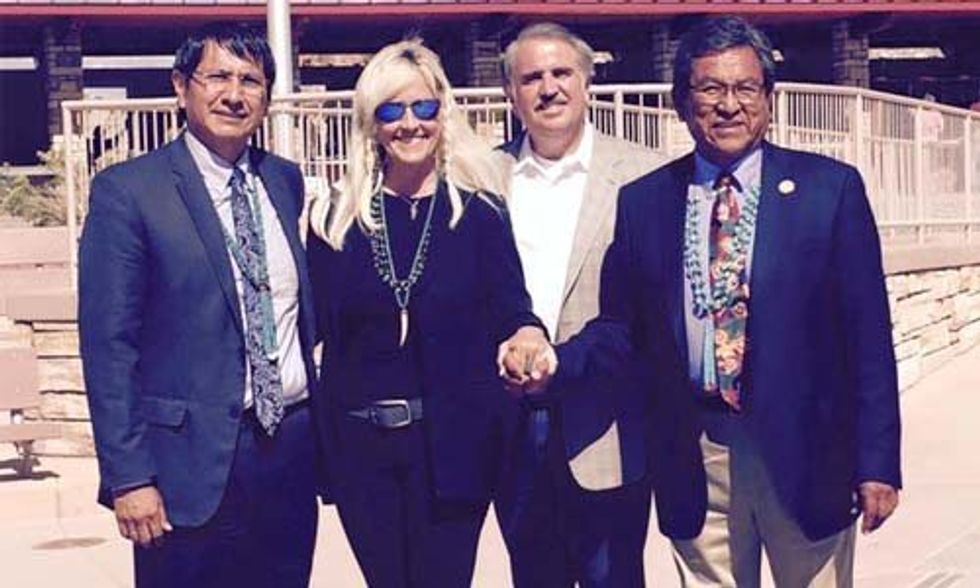 Environmental activist Erin Brockovich, responsible for the largest settlement ever paid in a direct-action lawsuit in U.S. history, accused the U.S. Environmental Protection Agency (EPA) of lying about how much toxic wastewater spilled into the Animas river from a Colorado abandoned mine.

She made the statements on Tuesday during a visit to the Navajo Nation—the country's largest American Indian reservation—while she met with Navajo leaders and farmers and spoke to a group of high school students.

"They did not tell the truth about the amount. There were millions and millions of gallons," Brockovich said, expressing shock at the agency's actions leading up to the spill and its response afterward.

A mining and safety team working on behalf of the EPA said that a million gallons of mine waste was spilled from the abandoned Gold King Mine in San Juan County, Colorado in early August. However, a few days later, the EPA revised their estimate, saying it was likely three times as high as originally estimated. Downstream communities declared states of emergency and the Navajo Nation vowed to take action against the EPA.

"Uncertainty lingers over the long-term dangers to public health and the environment from the spill, which contaminated rivers in Colorado, New Mexico and Utah," reports the AP. "EPA says the threat has eased, allowing treatment plants to start drawing water from the rivers again and ending warnings against recreational activities. But Navajo leadership is skeptical."

Leaders of the tribe went to the Gold King Mine to investigate just days after the spill. They believe even the 3 million gallon estimate is too low. The tribe is doing its own water and sediment testing. In the meantime, some irrigation systems have remained off, leaving thousands of acres of crops without water for weeks.

"It's a terrible disaster, and unfortunately it's a situation we see playing itself out not only on the Navajo Nation, but across the United States of America," Brockovich said, referring to pollution and lax enforcement.

"You are the future and you will be the answers," she told a gathering of high school students. A series of Congressional hearings investigating the spill began yesterday. Republicans in the House and Senate said that EPA officials "have withheld documents that could explain what went wrong."

But not everyone believes the EPA is to blame for the spill. Lauren Pagel, policy director of the environmental group Earthworks, says we need to hold the mining industry accountable. She spoke yesterday at the House Science, Space and Technology Committee hearing regarding the spill.

"The real problem is the 500,000 abandoned and inactive hardrock mines littering our nation that may cost more than $50 billion to clean up with no dedicated funding to pay for it," says Pagel. "And we’re creating new, perpetually polluting mines every year. The result? 40 percent of the headwaters of western watersheds are polluted by mining.

Pagel argues that there are more "mine waste time bombs" to come unless we make hardrock miners pay "a mine cleanup fee like coal miners have for decades" and stop exempting them from environmental laws like the Clean Water Act.