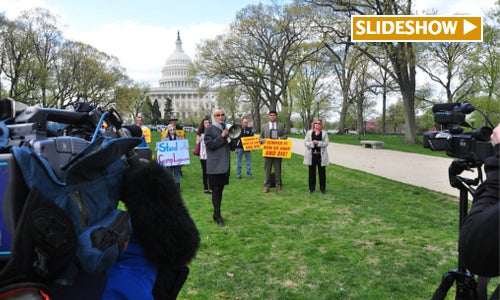 The U.S. Department of Justice (DOJ) has taken the side of electronics manufacturer CTS Corporation in a court case yesterday that could strip legal rights from military families poisoned by toxic drinking water at Camp Lejeune in Jacksonville, NC, and others harmed by industrial pollution across the country.

The case, CTS Corporation v. Waldburger, will decide if federal environmental law preempts North Carolina’s statute of repose, which imposes a 10-year limit to file a lawsuit. A ruling in favor of CTS Corporation would void injury claims of Asheville, NC, residents who, for decades, were exposed to trichloroethlylene—a known carcinogen—on land contaminated by the company.

“Whether it’s Marines at Camp Lejeune, families in Asheville, or residents of any community located near a Superfund site, we cannot allow this case to set a precedent giving polluters a free pass,” said Brockovich, who attended the rally outside the U.S. Supreme Court. “It is unconscionable and egregious to deny victims of industrial pollution their day in court.”

Rather than defending the victims, DOJ filed a brief on behalf of CTS Corporation, specifically noting the government’s interest in the case and how it could affect ongoing litigation from those sickened at Camp Lejeune.

“DOJ is purposely supporting a known polluter to set a legal precedent which would deny Marines, veterans and their families of the very constitutional rights we all served and sacrificed to protect,” said retired Master Sgt. Jerry Ensminger, who uncovered the contamination at Camp Lejeune after losing his 9-year old daughter Janey to leukemia. “We just want the opportunity to present our cases in court and allow the merits of our cases to be the determining factor. DOJ has instead resorted to last ditch ‘legal gymnastics’ to kill all of our claims in their cribs.”

“It is preposterous that DOJ is asking the U.S. Supreme Court to reward corporate and government irresponsibility and condone the poisoning of up to one million Marines and their families who faithfully served this country,” said Mike Partain, a breast cancer survivor who lived at Camp Lejeune.

DOJ’s position conflicts with the Obama Administration’s commitment to protect public health and the environment. In Aug. 2012, President Obama signed the Janey Ensminger Act into law, which offers health benefits to those contaminated at Camp Lejeune.

“Instead of fulfilling its obligation to take care of the military veterans and families sickened at Camp Lejeune, the U.S. government has turned its back on them,” said Heather White, Environmental Working Group’s executive director. “It is truly disappointing for not only the victims of Camp Lejeune, but for all of the men and women who serve our country.”

“Today we stand with the estimated one million Marines, their families, and the civilians of Camp Lejeune,” said Angela Canterbury, Project On Government Oversight’s director of public policy. “It’s time to finally protect those who protect us.”