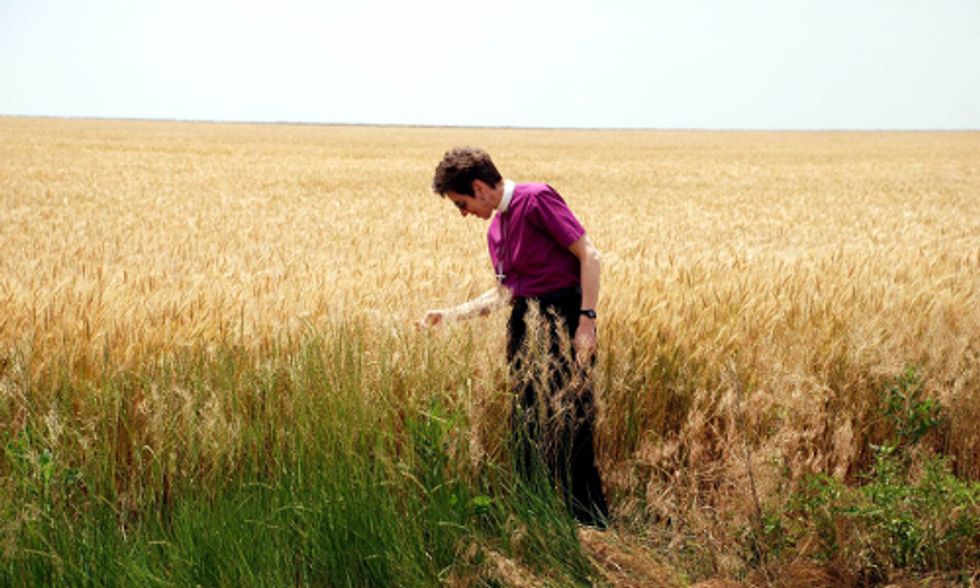 Pope Francis has become something of a climate hero, as he's continued to use his pulpit in the Vatican to decry abuse of the planet. This week in Los Angeles, the leader of another Christian group added her voice to the discussion.

Katharine Jefferts Schori, the presiding bishop of the U.S. Episcopal Church, delivered the keynote address at a church-sponsored forum called Climate Change Crisis. The event kicked off 30 Days of Action on climate change in the 2.5 million-member denomination, a branch of the UK-based Anglican Church. During the 30 Days of Action, which runs through Earth Day April 22, the church is inviting members and others to sign up for a daily email to help them "learn, advocate, act, proclaim, eat, play and pray."

Concern for the climate comes naturally to Jefferts Schori. Prior to being ordained and then elected to head the church in 2006, she earned her undergraduate degree in biology at Stanford, followed by her masters and PhD in oceanography from the University of Oregon and she worked as a marine biologist.

In her keynote speech, she spoke our strongly against what she called the "wanton abuse of the planet."

"Episcopalians have a prayer that names 'this fragile earth, our island home'," she said. "We profess that God has planted us in a garden to care for it and for all its inhabitants, yet we have failed to love what God has given us. We continue to squander the resources of this earth, and we are damaging its ability to nourish the garden's diverse web of life. Jesus insists that those who will enjoy abundant life are those who care for all neighbors, especially 'the least of these'—the hungry and thirsty, the imprisoned and sick—and that must include all the species God has nurtured on this planet."

"Even those who cannot understand the duty to care for birds and sea creatures must recognize that the life of human beings depends on the health of the whole planet," she continued. "The poorest human beings are soonest and most deeply affected by climatic changes, and least able to respond. Ultimately human beings with the most resource-intensive lifestyles are causing the hunger and thirst, displacement, illness and impoverishment of climate refugees and those without resources to adapt. There is no escape from that death and destruction, for our fate is tied to the fate of all our neighbors—the salvation of each depends on the salvation of all."

"There are a few very loud voices who insist this is only 'natural variation,' but the data do not lie," she said, calling out climate deniers. "Those voices are often driven by greed and self-centered political interests, and sometimes by willful blindness. The Judeo-Christian tradition has always called those motivations sinful. It is decidedly wrong to use resources that have been given into our collective care in ways that diminish the ability of others to share in abundant life. It is equally wrong to fail to use resources of memory, reason and skill to discern what is going on in the world around us. That has traditionally been called a sin of omission. We are making war on the integrity of this planet. The result is wholesale death as species become extinct at unprecedented rates, and human beings die from disease, starvation, and the violence of war unleashed by environmental chaos and greed."

In addition to her address, Jefferts Schori did an interview with The Guardian of London to call attention to the Episcopal Church's climate activism. She again emphasized the moral dimension of caring for the Earth and called out the deniers.

“It is much like the civil rights movement in this country where we are attending to the rights of all people and the rights of the earth to continue to be a flourishing place," she told The Guardian. “It is certainly a moral issue in terms of the impacts on the poorest and most vulnerable around the world already. I really hope to motivate average Episcopalians to see the severity of this issue, the morality of this issue. Turning the ship in another direction requires the consolidated efforts of many people who are moving in the same direction. It's hard work when you have a climate denier who will not see the reality of scientific truth."

Some smaller denominations such as the Boston-based Unitarian-Universalist Association and the Cleveland-based United Church of Christ have voted to divest from fossil fuels. But Jefferts Schori told The Guardian that the Episcopal Church would not be going in that direction. “If you divest you lose any direct ability to influence the course of a corporation's behavior," she said.

Episcopalians are largely liberal, but Jefferts Schori had some good words for evangelical Christians who are paying more attention to climate issues.

“One of the significant changes in particular has been the growing awareness and activism among the evangelical community who at least somewhat in the more distant past refused to encounter this issue, refused to deal with it," said Jeffers Schori. “The major evangelical groups in this country have been much more forward in addressing this issue because they understand that it impacts the poor."