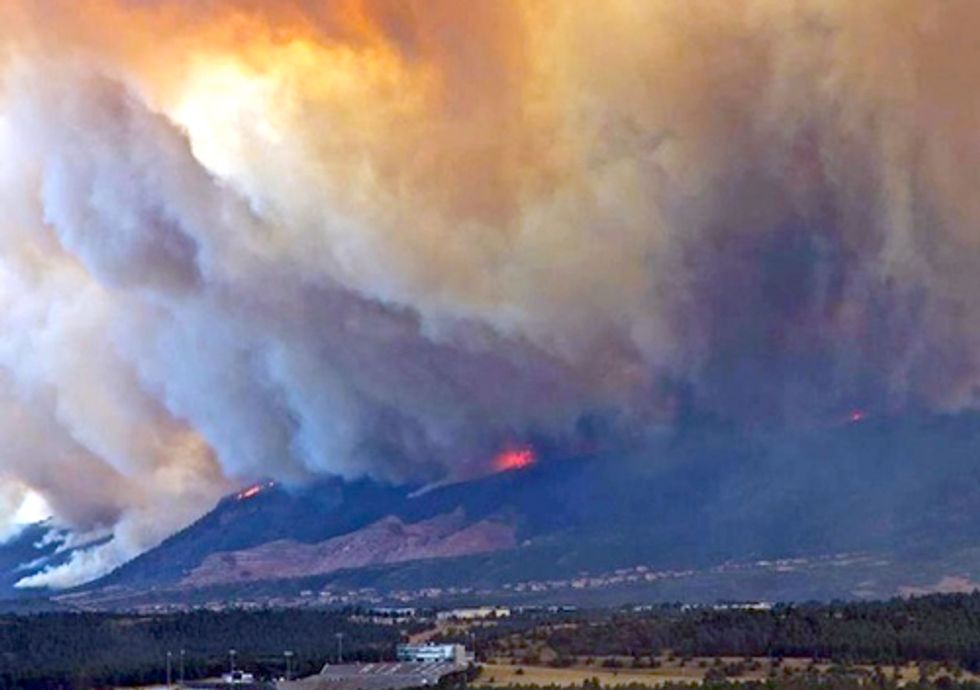 A prolonged and historic heat wave is baking the West and migrating eastward, with temperatures from Texas to Chicago expected to approach or exceed 100°F during the next few days. Already, several all-time high temperature records have been set.

On June 25 and 26, Denver tied its all-time record high temperature for any month of the year when the thermometer at Denver International Airport hit 105°F. That was an all-time high temperature record for June as well, and marked five straight days of 100 degree plus heat, which ties another record.

In Colorado Springs, which has been enshrouded in smoke from nearby wildfires at times, record high temperatures were set on four straight days including June 25.

The heat in Colorado is one ingredient that along with unusually dry conditions and strong winds is creating one of the worst wildfire seasons on record in the Rocky Mountain State. The High Park Fire has already burned 83,000 acres, making it one of the largest fires in state history. More than 1,800 personnel are currently battling the blaze, which has already cost at least $31.5 million, according to a U.S. Forest Service website. Another wildfire began on Tuesday and threatened the city of Boulder, causing staff at the National Center for Atmospheric Research to be evacuated.

According to a recent Climate Central analysis, Colorado was the 20th-fastest warming state between 1970 and 2011, with average temperatures increasing by about 0.5°F per decade. Arizona, which is also grappling with hot weather and wildfires, was the fastest-warming state, with an increase of about 0.6°F per decade.

The heat is not just affecting the West, however. The High Plains and even the South have been sweating it out under a dome of high pressure, which is causing a broad area of sinking air. As air sinks it warms, and this also inhibits the formation of showers and thunderstorms that could offer some heat relief.

In a long-term trend that demonstrates the effects of a warming climate, daily record-high temperatures have recently been outpacing daily record-lows by an average of 2-to-1, and this imbalance is expected to grow as the climate continues to warm. According to a 2009 study, if the climate were not warming, this ratio would be expected to be even. Other studies have shown that climate change increases the odds of extreme heat events and may make them warmer and longer lasting.

Bill Deger, a meteorologist for AccuWeather in State College, Pa., posted a comprehensive rundown of some of the more noteworthy heat records in the West and the High Plains.

“A couple of 113-degree readings in Kansas on Monday nearly claimed the top spot for the hottest temperature on planet earth. Only six other observing stations in the Middle East were hotter on Monday, with Makkah, Saudi Arabia, leading the pack at a blistering 117,” Deger noted. “A cooperative weather station near Tribune, Kan., which set an all-time record high of 109 on Sunday, turned around and beat the new record by a full 2 degrees on Monday.”

Deger wrote that Galveston, Texas had its earliest 100-degree day in any calendar year since at least 1875.

The heat is slowly building east, and records may fall during the next few days in cities such as Chicago, St. Louis, and Kansas City. The heat wave should reach the Mid-Atlantic states by the end of the week as well.