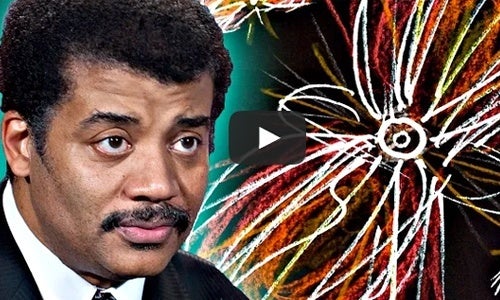 Set to the music of Igor Stravinsky, this epic video, narrated by renowned astrophysicist Neil deGrasse Tyson explains the history of our universe. The video seen by more than 800,000 people covers everything from how the universe began to the spontaneous creation and dissolution of black holes. He gives a great explanation of how the sun and planets formed with special attention to our home—planet Earth. He explains how conditions suitable for life emerged on our planet—what astronomers call the Goldilocks zone: not too hot, not too cold, where water, which is essential for life, does not freeze or boil.

In hearing Tyson explain the origin and history of our universe, you can’t help but appreciate just how fragile life on our planet is and how we need to take care of our life-giving ecosystems.

In listening to the video, I was reminded of astronomer Carl Sagan’s famous Pale Blue Dot speech. Well, it turns out that when Tyson was applying to college, Sagan tried to recruit him to Cornell. Tyson ultimately went to Harvard, but he was a big fan of Sagan, and later remarked about his visit with the famed astronomer saying, “I learned from Carl the kind of person I wanted to be.”

This video, along with the recent release of NASA’s “Blue Marble” image, is a great reminder that there is no Planet B. As Carl Sagan said in his Pale Blue Dot speech, “In all this vastness, there is no hint that help will come from elsewhere to save us from ourselves.”

Watch Neil deGrasse Tyson give a brief but fascinating explanation of the origin and history of the universe: