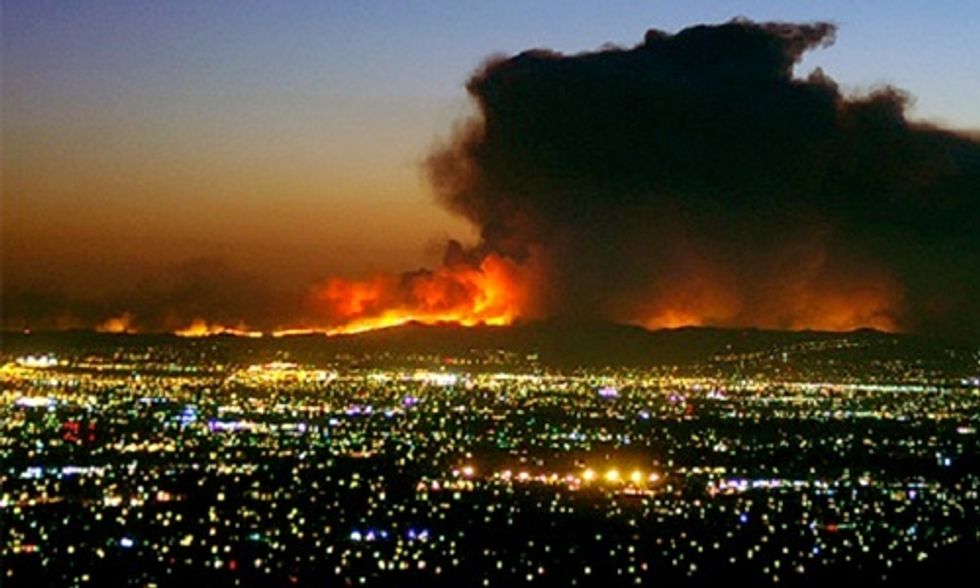 The firefighters are primed, hoses at the ready. May and June are often the peak months for forest fires in the southwest of the U.S., and the outlook for this year is grim.

“I wish I could have some hope,” says Dr Wally Covington, director of the Ecological Restoration Institute at North Arizona University. “It’s just a terrible situation in southern California.”

The main season for wildfires in the region has in the past been from mid-May through till late September, but now forest fires burn virtually year round.

“Since around 2000, we’ve seen more severe dry weather, matched with high winds throughout the western U.S. Intense firestorms are the result. Get in the vicinity of one of those and it’s like being near a blast furnace.”

Covington and other experts say it is vital that people and government policy adapt to the changes in climate.

Over the years, forests have been densely planted in many areas, and old forestry practices—such as clearing out forest and shrubland by regularly burning off old tree cover and dry shrubs—were stopped.

The result is not only an abundance of dense forested areas where fire can build up and spread easily, but also accumulations of dried-out grasses and shrubs—referred to as fine fuel.

Opening up forest areas and reintroducing controlled, periodic burning to rid the landscape of these tinder-dry fuels is key, according to Covington.

He says: “The U.S. Forest Service now sees opening up forest areas and restoring them to what they once were—right across the U.S.—as its primary goal. That’s a huge policy breakthrough.”

The past three years have been among the driest on record in California, and there are fears that the drought will continue.

Wells have dried up in many areas, reservoirs in the state are at a record low, and the snowpack in the Sierra Nevada mountain range—vital for feeding water on to the lands below—is at an historic low for the time of year.

For the first time in California’s history, mandatory water restrictions have been brought in, with cities and towns required to cut water use by 25 percent.

This does not, however, apply to the state’s multi-billion dollar agricultural industry, which uses up to 80 percent of water supplies.

Besides the drought, strong winds and higher temperatures, other factors have increased the risk of wildfires across the region. For example, building houses in forest and shrubland areas has also increased the danger of fires being ignited.

“We’ve just got to stop building in those places,” Covington says. “It was crazy 40 years ago—and it’s even more crazy now.”