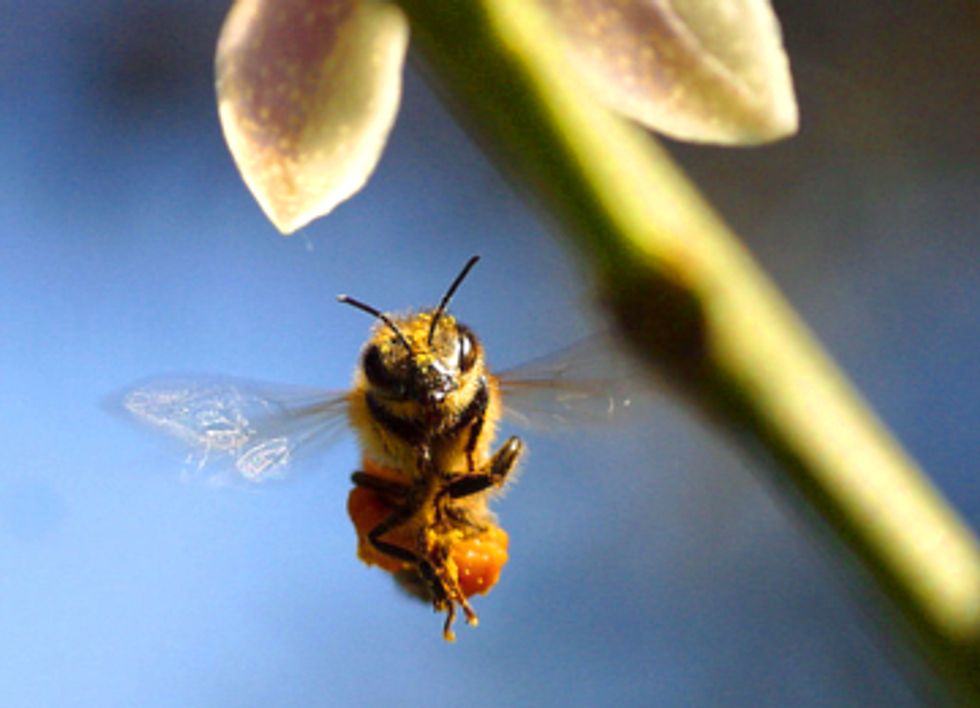 Under the new guidelines, the labels will prohibit the use of some neonicotinoid pesticides when bees are present, and include a “bee advisory box” and icon with information on routes of exposure and spray drift precautions. Critics question the efficacy of the label change in curtailing a systemic pesticide that contaminates nectar and pollen, poisoning bees indiscriminately, and the enforceability of the label language, which is geared to managed not wild bees. The EPA has not formally acknowledged the peer-reviewed science linking neonicotinoid pesticides to colony collapse disorder and bee decline, as is the case in the European Union’s European Food Safety Authority.

Specifically, the new label applies to pesticide products containing the neonicotinoids imidacloprid, dinotefuran, clothianidin and thiamethoxam. Neonicotinoids are a relatively new class of insecticides that share a common mode of action that affect the central nervous system of insects, resulting in paralysis and death. They include imidacloprid, acetamiprid, clothianidin, dinotefuran, nithiazine, thiacloprid and thiamethoxam. Peer-reviewed science has repeatedly identified these insecticides as highly toxic to honey bees and other pollinators. The neonicotinoid class of insecticides has been identified as a leading factor in bee decline.

“Multiple factors play a role in bee colony declines, including pesticides," said Jim Jones, assistant administrator for the EPA’s Office of Chemical Safety and Pollution Prevention. "The Environmental Protection Agency is taking action to protect bees from pesticide exposure and these label changes will further our efforts.”

Unfortunately, this label change does not address the fact that neonicotinoids are systemic, meaning plants take up these pesticides and exude them in their pollen and nectar, with residues remaining in the plant for its lifetime, continually endangering any pollinators that forage or pollinate these contaminated plants.

Additionally, the bulk of neonicotinoid uses are in fact for treated seed, which accounts for the majority of corn planted in the U.S. Contaminated dust that originates from the planting of these seeds drift off fields and have been known to kill large numbers of bees. Recently, 37 million honeybees were reported dead across a single farm in Ontario from the dust associated with planting neonicotinoid-treated corn seeds. According to New York beekeeper Jim Doan:

In New York state, for example, foliar application of neonics are used only for apples and some vegetables, and not used for the majority of the crops out there—corn and soybeans—which are seed coatings. When I heard about the new labeling requirements, my first question was, so are we going to put these labels on the bags of corn? No.

Neonicotinoids are primarily used as seed treatment for corn and soybeans, as well as in home and garden products. These chemicals contaminate nectar and pollen, as well as soil and surface water. Foraging and navigational disruptions, immune suppression and learning/memory disorders have been documented in bees exposed to even low levels of these chemicals.

There is also concern that the new label language is unenforceable. The EPA is aware that label directions such as these are not adhered to in the real-world. Many beekeepers can attest to this and have repeatedly communicated this to the EPA enforcement and registration officials. Addressing lack of compliance has been an area the agency has not sufficiently addressed throughout the years. For instance, after specifying that, “the product may not be applied while bees are foraging. Do not apply this product until flowering is complete and all petals have fallen,” the EPA adopts the loophole:

If an application must be made when managed bees are at the treatment site, the beekeeper providing the pollination services must be notified no less than 48-hours prior to the time of the planned application so that the bees can be removed, covered or otherwise protected prior to spraying.

This keeps the onus on the beekeepers to make sure their bees are safe.

On March 21, 3013, Beyond Pesticides joined beekeepers, environmental and consumer groups in filing a lawsuit in Federal District Court against the EPA for its failure to protect pollinators from dangerous pesticides. The coalition is seeking suspension of the registrations of insecticides—clothianidin and thiamethoxam—which have repeatedly been identified as highly toxic to honey bees, clear causes of major bee kills and significant contributors to the devastating ongoing mortality of bees known as colony collapse disorder (CCD). The suit challenges the EPA’s oversight of these bee-killing pesticides, as well as the agency’s practice of “conditional registration” and labeling deficiencies.

In the meantime, the EPA has stated it would support short-term mitigation measures, such as improved seed coatings to reduce contaminated dust, and improved farming equipment, measures which do not go far enough to protect both commercial and wild bee populations. These new label changes, while an improvement from current pollinator hazard statement on pesticide labels, also do not go far enough to protect bees, especially wild bees.

“This is a step forward, certainly, but it does not address the issue that we need to address. EPA deserves a pat on the back for coming up with something, but we have a long ways to go,” said Mr. Doan. “We need to continue to put pressure on the agency and the industry and keep moving forward.”

Earlier this year, the EU announced a two-year suspension on these bee-killing pesticides. In early July, Beyond Pesticides urged President Obama in a joint letter to direct the EPA to follow Europe’s lead in suspending certain neonicotinoid pesticides uses and take on even more protective measures, including a minimum two-year suspension for all outdoor uses of neonicotinoid insecticides pending resolution of their hazards to bees and beneficial organisms. Highlighting the negative environmental and economic impacts of outdoor uses of the EPA-approved neonicotinoid insecticides as well as a recognition that the initial risk assessments for these chemicals fail to adequately consider key risks to bee health, the letter to President Obama notes that it, “would not be responsible to continue to allow these threatening compounds to be used so broadly.”

With one in three bites of food reliant on bees and other beneficial species for pollination, the decline of these important species demands swift action. The mounting scientific evidence, along with unprecedented annual colony losses at 40 to 90 percent this year, demonstrates the impacts that these pesticides are having on these fragile beings.