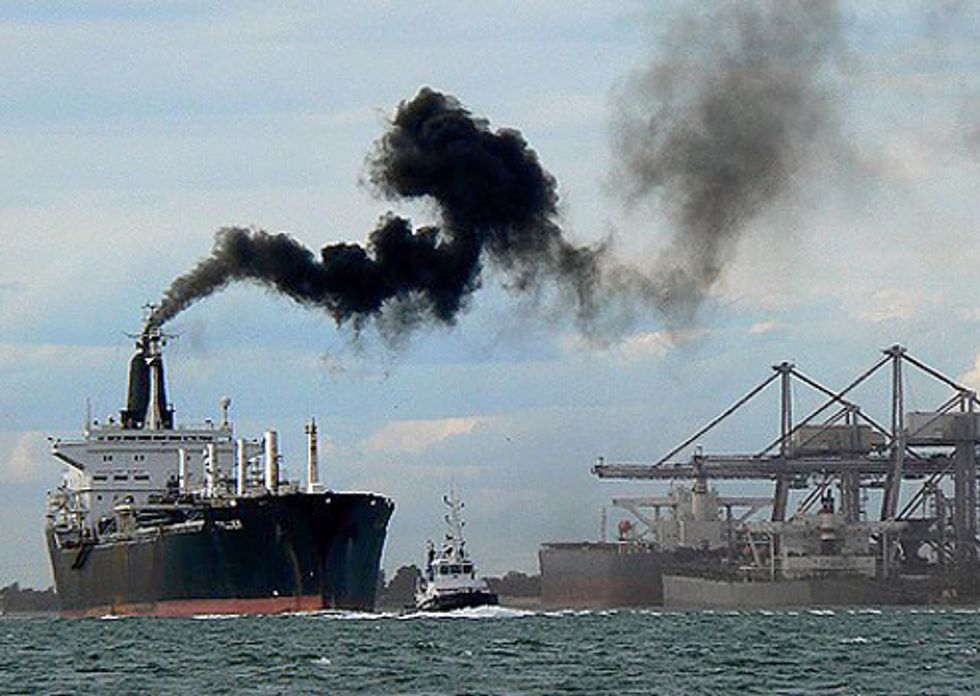 The U.S. Environmental Protection Agency (EPA) announced that it would not take action to control global warming pollution from major mobile sources at this time. The agency’s decision not to regulate ships and other non-road engines, and its indefinite delay in regulating aircraft, comes in response to a 2010 lawsuit from an environmental coalition asking the EPA to address these types of pollution. The announcement, which presents a major setback to efforts to curb global warming emissions, came despite a recent court ruling that the EPA has a duty to address greenhouse pollution from aircraft.

Together, aircraft, ships and non-road vehicles and engines are responsible for 24 percent of U.S. mobile source greenhouse gas emissions and emit approximately 290,000 tons of soot every year. Pollution from these sources is projected to grow rapidly in the coming decades.

“The shipping industry is a major contributor to global warming pollution, but it’s also one of the few sectors where climate solutions will actually save companies money. Annually U.S. ships release more carbon dioxide than 130 million cars and this is on track to triple over the next 20 years. It is time for EPA to issue common sense rules—like setting fuel efficient speed limits—to control pollution from this important sector, especially since it would be a ‘win-win’ proposition,” said Jackie Savitz, vice president for North American Oceans at Oceana.

“Now is the time for EPA to turn to these sources of pollution,” said Sarah Burt of Earthjustice, representing the coalition. “EPA has a clear moral obligation and legal duty under the Clean Air Act to act decisively to protect public health and the environment on which all Americans depend.”

“The evidence of climate change is becoming clearer each and every day,” said Marcie Keever, oceans and vessels project director for Friends of the Earth. “We can no longer afford the EPA’s refusal to address important and growing sources of greenhouse gas emissions.”

“EPA needs to shift into high gear and limit the impact that industrial non-road vehicles and engines impose on our common airshed,” said Dan Galpern, an environmental attorney representing the International Center of Technology Assessment, the Center for Food Safety and Friends of the Earth on the non-road petition. “The climate crisis will not be allayed without the maximum achievable reduction in GHG emissions. This requires reasonable restrictions on monster earth movers, heavy mining and logging equipment, agricultural pumps and other industrial machinery that presently spew climate pollution without end.”

The lawsuit at issue on June 19 was filed in federal district court in the District of Columbia by Earthjustice and the Western Environmental Law Center on behalf of Oceana, Friends of the Earth, the Center for Biological Diversity, the Center for Food Safety and the International Center for Technology Assessment.

Independent U.S. scientists, having evaluated the paleoclimate and instrumental records, as well as increasingly sophisticated geophysical models, have determined with high confidence that global warming caused by greenhouse gas emissions from the burning of fossils fuel has begun to disrupt global and regional climate systems. They predict that, unless these emissions are reduced sharply within decades, natural and human systems on which species and civilization respectively depend will be disrupted irretrievably. In partial response, the U.S. EPA has begun to restrict such emissions from new cars and light trucks, but the government’s determination to act strongly to preserve a habitable climate system remains in question. Major sector sources of GHG emissions, including aircraft, vessels and other non-road vehicles and engines, must not be given a free ride.

Aircraft emit 11 percent of carbon dioxide emissions from U.S. transportation sources and 3 percent of the United States’ total greenhouse gas emissions. The U.S. is responsible for nearly half of worldwide CO2 emissions from aircraft, and such emissions from aircraft are anticipated to increase substantially in the coming decades due to the projected growth in air transport. According to the Federal Aviation Administration, emissions from domestic aircraft will increase 60 percent by 2025. While some countries, such as the European Union, have already begun to respond to these challenges, the U.S. has failed to address this enormous pollution source.

Non-road vehicles and engines are used in the agricultural, construction, commercial, industrial, mining and logging sectors. In 2008 such industrial non-road vehicles and engines were responsible for approximately 9 percent of U.S. mobile source CO2 emissions, as well as significant emissions of black carbon, or soot. Nearly one-third of these emissions are produced by the construction and mining sectors, while one-fifth are from agriculture. The EPA projects that CO2 emissions from the non-road sector will increase approximately 46 percent between 2006 and 2030.