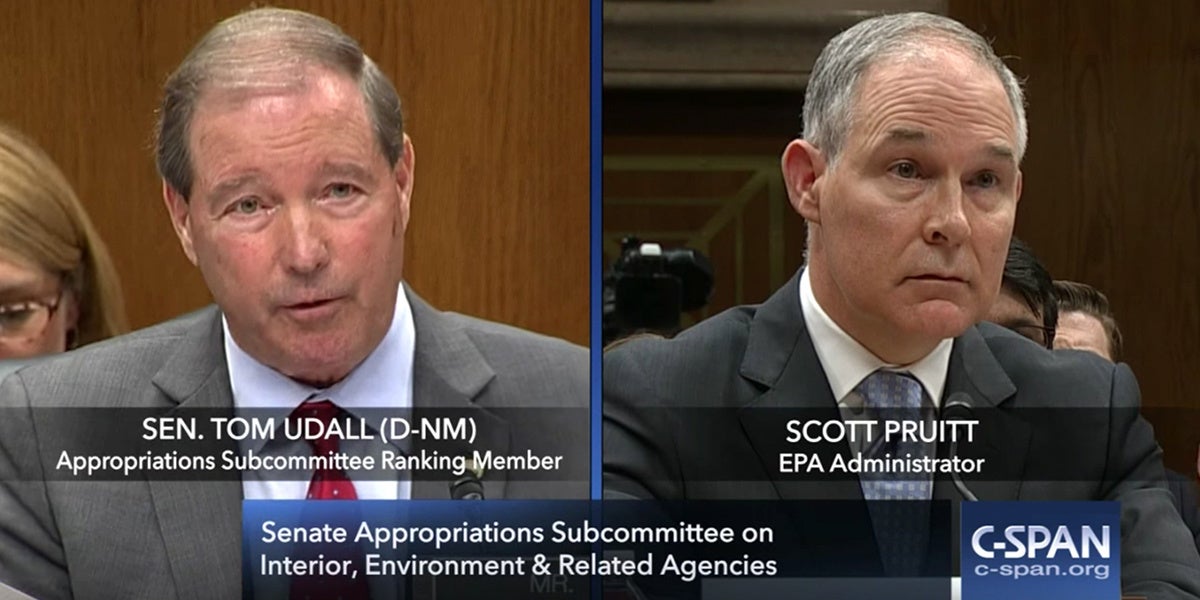 In the hearing, which was supposed to be a routine budget hearing conducted by the Senate Appropriations subcommittee on the environment, Pruitt admitted that one of his employees, Millan Hupp, had worked for free searching for a place for him to live in Washington, DC. The leading Democrat on the subcommittee, New Mexico Senator Tom Udall, said the free labor constituted a gift. Federal officials are prohibited by law from receiving gifts of more than $10 from employees.

Pruitt also admitted to establishing a legal defense fund to pay for 12 federal investigations into his management of and spending practices at the EPA.

Further, he made a claim that directly contradicted an email cited by Udall, CNN reported.

Pruitt insisted after being pressed by Udall that the use of lights and sirens was not his personal preference but rather agency policy.

When asked if he requested the use of lights and sirens, he responded, “No, I don’t recall that happening,” CNN reported.

Like Pruitt’s previous testimonies, Wednesday’s questions focused more on Pruitt’s spending decisions and less on the actual deregulatory policies he has implemented as EPA head.

This shift in focus was pointed out by subcommittee chair Senator Lisa Murkowski of Alaska.

“I’m being asked, really constantly asked, to comment on housing and security and travel,” she said, according to The New York Times. “Instead of seeing articles about efforts to return your agency to its core mission, I’m reading articles about your interactions with the industries that you regulate.”

“You have used your office to enrich yourself at the expense of the American taxpayer and public health and such abuses have led to several investigations,” Udall said, as CNN reported.

After Murkowski’s opening criticism, Republican senators did not push back on Pruitt’s answers.

Pruitt vaguely acknowledged that he “would not make the same decisions again,” but shifted blame for some of his spending missteps, such as the installation of a $43,000 soundproof phone booth, onto EPA rules that he said did not adequately control for spending abuses. He has since instituted a policy that any expenditure over $5,000 will be reviewed by the EPA’s chief of staff and chief financial officer, The New York Times reported.