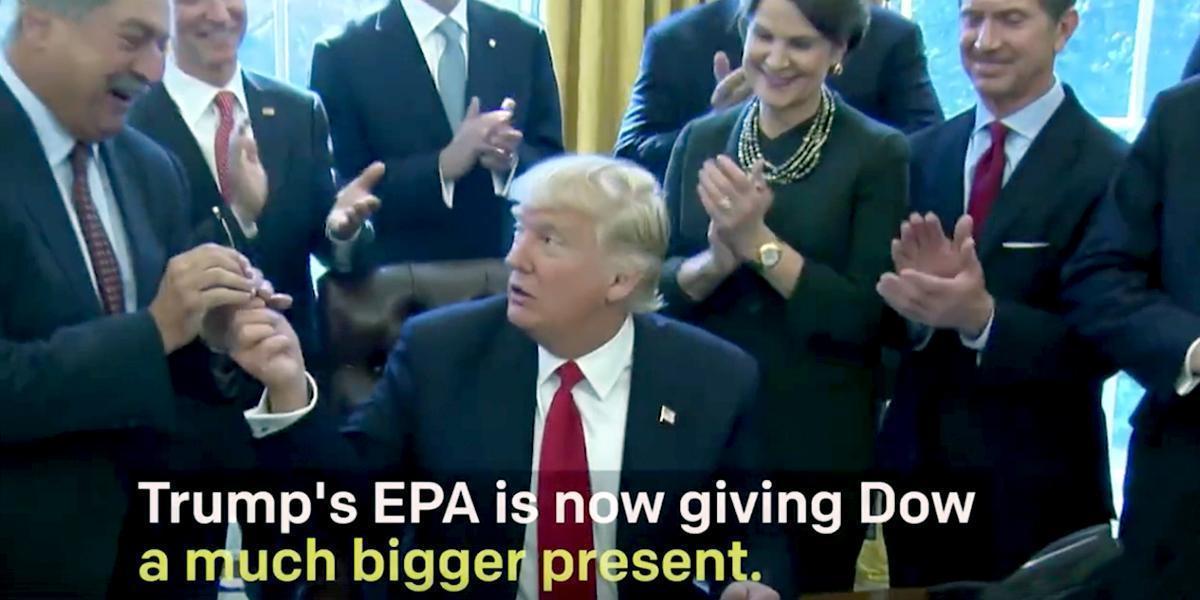 Perhaps the Senate, in its hearing on Scott Pruitt’s nomination to head the U.S. Environmental Protection Agency (EPA), should have questioned Pruitt as the chief pediatrician for America’s children. As head of the EPA Pruitt gets to decide what is safe for our kids—in the air they breathe, the water they drink, the food they eat and the communities they play. Senators didn’t ask—but they are finding out.

In his first big test of what kind of pediatrician he will be, Pruitt decided to reverse an earlier EPA decision to ban the pesticide chlorpyrifos, a potent nerve gas banned from household use years ago, but still used in farms, orchards, pastures and golf courses.

Chlorpyrifos belongs to the same family as the nerve gas sarin—suspected of being behind the appalling chemical weapon attack which occurred this week in Syria, provoking appropriate outrage from the administration. But EPA has just decided to allow the continued dousing of America’s rural landscapes with a close cousin—a different chemical weapon.

Chlorpyrifos is one of the most frequently cited causes of farm-worker pesticide poisoning—but is particularly toxic to young children and the fetus. The pesticide has come across my email screens periodically for over a decade, as organizations like the Nature Resources Defense Council slogged forward, petitioning the EPA to implement a simple requirement of federal pesticide law: that any pesticide must be shown to be safe before use. In 2015 the agency said is intended to ban it—but didn’t finalize the decision. Eventually, courts ordered EPA to make a final decision on the ban—and Pruitt decided to ignore the science.

He did not do so because he asserted that chlorpyrifos was safe; he simply said that there were uncertainties, and that in that situation farmers were entitled to continue to use the chemical, exposing farm workers, their children, surrounding communities and consumers of food sprayed with the chemical, to a pesticide whose safety is at best highly dubious—in quantities up to 14,000 times the safe level.

“We need to provide regulatory certainty to the thousands of American farms that rely on chlorpyrifos, while still protecting human health and the environment,” Pruitt said—not the message you would expect to hear from a pediatrician if you asked him if you should give your kids foods laced with a potent neurotoxin that has been shown to damage their mental development.

This reversal of the clear requirement of federal pesticide law—that safety come first—along with Pruitt’s revealing ordering of his priorities—regulatory certainty to pesticide users first, with human health qualified by “still”—reinforces something we are learning about the Trump administration.

Candidate Trump made a wide array of promises, many of them expressed within the 140 characters of a tweet. Huge numbers contradicted each other. How the administration would resolve those conflicts was one of the great unknowns. Trump, for example, proclaimed that “I want clean air and clean water” during his campaign. But he also pledged to dismantle the EPA.

It has been a fairly consistent pattern in the first 10 weeks of the administration that a campaign promise to help the powerful was likely to be honored, while one to help the vulnerable would be an earlier casualty of priority setting. Children of farm workers don’t rank as high as Dow Chemical, the main manufacturer and defender of chlorpyrifos. QED—we know how this administration will come down.

That, of course, is precisely what you don’t choose your children’s pediatrician for—his loyalty to chemical and drug companies before his concern for your family. There’s been a fair amount of media coverage of the decision, which may be a sign that the country is waking up to the fact that Trump’s campaign tweet language has consequences, even when the courts and Congress block many of his initiatives.

Sen. Tom Carper, of Delaware, has jumped on the chlorpyrifos question, sending Pruitt a sharp query, and pointing out that Pruitt’s own decision did not even purport to find the legally necessary “reasonable certainty of no harm” required to allow pesticide residues on food. Carper asked Pruitt to provide him “all documents (including but not limited to emails, legal and other memorandum, drafts of legal or regulatory decisions or orders, white papers, scientific references, letters, telephone logs, meeting minutes and calendars, slides and presentations)” relating to the decision.

Normally, a demand for such documentation is seeking the “smoking gun”—and Pruitt fiercely resisted requests for such documents from his attorney-general’s office in Oklahoma until after his confirmation had occurred, seeking to conceal his hand-in-glove cooperation with big oil and coal interests in that office. But while I am very sure Pruitt will resist Carper’s request, there is a sad possibility here—that no smoking gun was required, so blandishment’s, no elaborate courtship by pesticide interests. Pruitt may simply never have considered any other decision than letting a dangerous chemical be massively applied to America’s food supply.

After all, wasn’t America at its greatest when the air, food and water were most toxic?

Fake News Alert: Callous as Pruitt’s decision to continuing allowing the use of a nerve gas as a tool in American agriculture, there is no evidence, however informed your informant claims to be, that President Trump ordered Pruitt to permit use of chlorpyrifos to please his golf course management.