How Trump’s EPA Is Moving to Undo Fracking Wastewater Protections 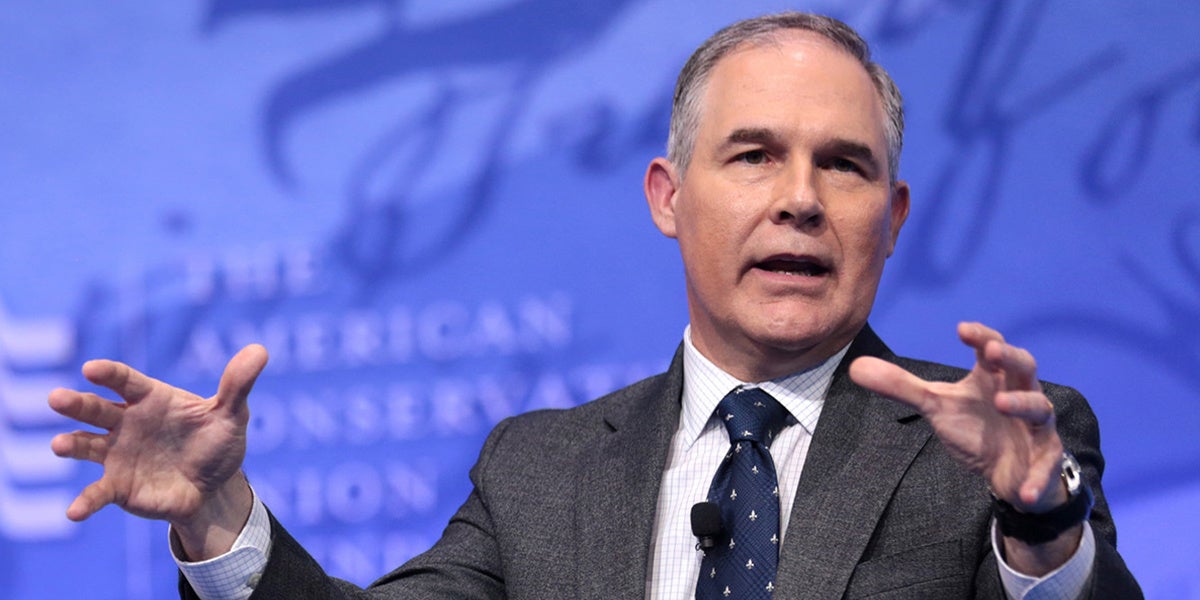 Back in 2008, residents of Pittsburgh, Pennsylvania, and surrounding areas received a notice in the mail advising them to drink bottled water instead of tap water—a move that U.S. Environmental Protection Agency (EPA) internal memos at the time described as “one of the largest failures in U.S. history to supply clean drinking water to the public.”

The culprit: wastewater from oil and gas drilling and coal mines. This included fracking wastewater that state officials had allowed to be dumped at local sewer plants—facilities incapable of removing the complex mix of chemicals, corrosive salts and radioactive materials from that kind of industrial waste before they piped the “treated” water back into Pennsylvania’s rivers.

The levels of corrosive salt in some of the oil and gas wastewater was so high that at some sewage plants, it was suspected of killing off the “good bacteria” that removes fecal coliform and other dangerous bacteria from raw sewage.

State and federal regulators responded with a mix of voluntary requests and, eventually, rules designed to stop drillers from bringing their wastewater to ill-equipped water treatment plants.

Eight years after the Pittsburgh incident, in 2016, the EPA finished writing the rules that would stop that kind of failure from reoccurring, specifically forbidding sewage treatment plans from accepting untreated wastewater from fracked wells.

A few months earlier, the EPA had announced its long-awaited national study of the risks that fracking-related pollution posed to American drinking water supplies. That study specifically examined the impacts of using sewage plants and commercial wastewater plants to handle fracking waste. It made special note of the dangers of toxic chemicals called trihalomethanes that were created during the treatment process, as well as the likelihood that “radium, metals, and organic compounds can also be discharged.”

Now, the Trump administration’s EPA is announcing that it wants to study the industry’s wastewater all over again. The Trump-era study will examine oil and gas wastewater, asking, in the administration’s words, “whether any potential federal regulations that may allow for broader discharge of treated produced water to surface waters are supported.”

In other words, Trump’s EPA is questioning whether the rules should be changed, allowing wastewater from oil and gas wells, including fracked wells, to make its way into America’s rivers, streams, lakes and reservoirs after some treatment.

The problem is that treating oil and gas waste from fracked wells remains particularly tricky because the industry is still allowed to keep secret information about which chemicals drillers use when injecting fluids to crack open shale formations to release oil and gas.

This situation means even the EPA doesn’t know what exactly to test for if inspectors want to find out whether that treated wastewater is safe to re-enter American water supplies.

The EPA has long struggled with internal conflict between the agency’s scientific experts and its political appointees, but that battle has taken on an entirely different dimension under its current leadership.

The problem is so severe that George W. Bush’s EPA chief Christine Todd Whitman penned a column calling Administrator Scott Pruitt “unfit to run the EPA,” adding that his proposals are “a surefire way to kill science at the agency.”

Pruitt is also under multiple investigations for misconduct so glaring that The New York Times editorial board described him as “not just an industry lap dog but also … [a] small-time grifter.” His personal grasp on basic science has been frequently questioned—perhaps in part because recently released internal EPA emails show that he has sought briefings from industry-funded science deniers while rejecting meetings with premier scientific organizations like the American Association for the Advancement of Science.

The EPA’s May 2 announcement seems to have largely flown under the radar, generating virtually no press coverage outside of the industry trade press. Its timing could play into that. The announcement came just one day after two high-level EPA aides left the agency under ethics investigation.

In addition, most of the national press has been focused on Pruitt’s ever-growing list of ethics and personal spending scandals: the first-class flights, bullet-proof desk and high-security motorcades to fancy restaurants, his sight-seeing trips and other apparent abuses of taxpayer funds.

While the press spotlight shines on those issues, Trump’s EPA is moving to shake the foundations of protections for American drinking water supplies from contamination by oil and gas waste, opening the doors for the industry to sell its wastewater as a product instead of paying for its disposal.

“Currently, the majority of this wastewater is managed by disposing of it using a practice known as underground injection, where that water can no longer be accessed or used,” Trump’s EPA wrote in a release announcing the new study.

“Some states and stakeholders are asking whether it makes sense to continue to waste this water, particularly in water scarce areas of the country, and what steps would be necessary to treat and renew it for other purposes.”

Not Just Fracking: Radioactivity and Brine 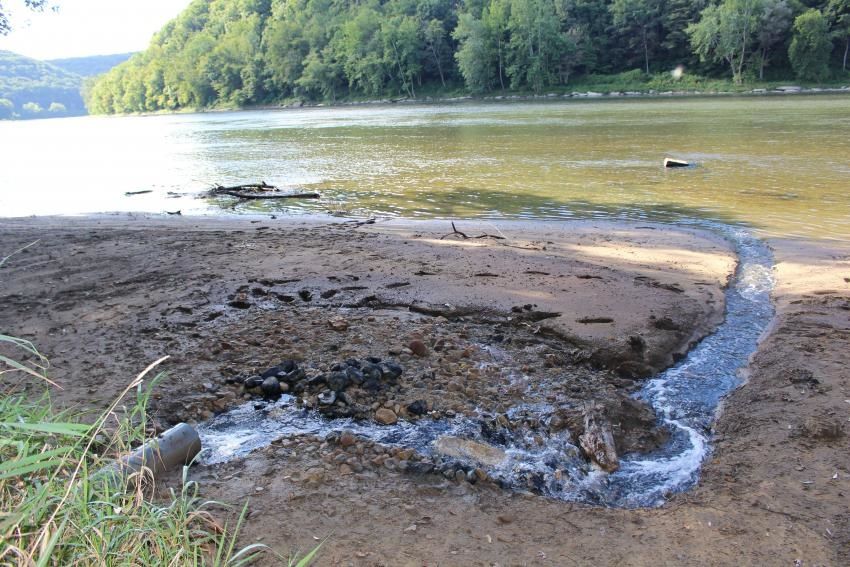 The levels of pollution found in oil and gas wastewater can vary, depending on which heavy metals and radioactive materials are found in the ground where the well is drilled, whether the waste comes from a conventional oil and gas well or a fracked well where drillers mix large amounts of chemicals into the water, and how long after drilling and fracking the water rises up from the ground.

There’s no set definition for many of the labels that the industry uses to describe that wastewater, to differentiate between “produced water” or “brine,” for example.

When the EPA wrote its 2016 rules, officially known as the Oil and Gas Extraction Effluent Guidelines, the agency believed that no wastewater, whether from fracked wells or conventional, was still being trucked or piped to sewage treatment plants, but it turned out that some conventional oil and gas drillers in Pennsylvania had in fact kept on trucking. They objected and the EPA gave them until August 29, 2019 to stop their dumping.

An industry group has now filed a lawsuit, still pending, seeking to block the 2016 rules from applying to conventional oil and gas drillers.

Though public awareness of the hazards of fracking waste has grown over the past decade, oil and gas wastewater that has nothing to do with fracking can be heavily polluted as well. Conventional oil and gas wastewater, which the industry often calls brine, carries high levels of corrosive salts, and it has in some cases been linked to pollution problems similar to those associated with fracking.

Radium levels up to 650 times higher than those upstream from the commercial treatment plants were found downstream of discharge pipes, according to a peer-reviewed study by Duke University published in January.

The sediments that the team, led by Avner Vengosh, professor of geochemistry and water quality at Duke, found in Pennsylvania’s streambeds carried levels of radium as high as 25,000 Becquerels per kilogram (Bq/kg)—about eight times the threshold at which radioactive oilfield waste like sludge is considered “contaminated.”

Radium mostly emits alpha radiation, which can be blocked by people’s skin, and the health risks associated with radium stem primarily from drinking contaminated water or eating fish that lived in those polluted waters. Radium has a half-life of 1,600 years, meaning it persists in the environment for an unusually long time, and researchers were able to establish that the pollution occurred during the last three years.

“Despite the fact that conventional oil and gas wastewater is treated to reduce its radium content, we still found high levels of radioactive build-up in the stream sediments we sampled,” Vengosh said. “Radium is attached to these sediments, and over time even a small amount of radium being discharged into a stream accumulates to generate high radioactivity in the stream sediments.”

Trump’s EPA wants to explore whether it makes sense to use more oil and gas wastewater instead of requiring it to be disposed. The main disposal method currently used in most states involves trapping that wastewater deep underground using injection wells, a practice that has led to earthquakes in Oklahoma, Texas and other states.

It’s a significant problem given that the sheer volume of wastewater coming from the oil and gas industry is enormous, with one 2015 estimate putting it at over 800 billion gallons a year.

The industry has struggled to find effective treatment methods to recycle the volume of wastewater it generates, which is sometimes calls “produced water.” That produced wastewater can be five to eight times saltier than ocean water, and those salts aren’t simply the familiar table salt but are instead corrosive salts that lace the water from oil and gas wells.

Recycling wastewater not only raises concerns about spills, transportation and other logistical headaches, it also begs the question of what to do with the waste left over from the wastewater recycling process itself. That process can concentrate toxic and radioactive materials into highly contaminated sludges. And re-using the water for more drilling can also raise the levels of pollutants in that water which will ultimately have to be disposed somehow.

Trump’s EPA is forging ahead with plans to re-open the question of what rules the industry will have to play by as it seeks to offload its waste.

“In the coming months, EPA plans to reach out to stakeholders—including states, industry, and nongovernmental organizations—to facilitate conversations,” the agency’s announcement states. “Following this study, EPA will determine if future agency actions are appropriate to further address oil and gas extraction wastewater.”