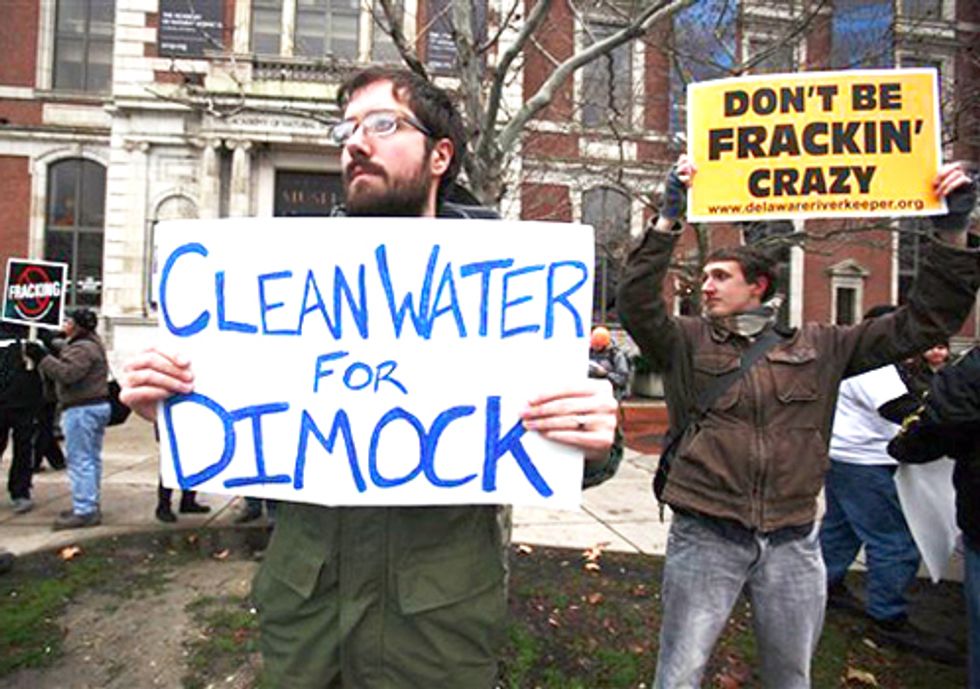 In the middle of an investigation into water contamination caused by natural gas drilling, with only partial results from less than 20 percent of households being investigated, the U.S. Environmental Protection Agency's (EPA) Region 3 office issued a press release on March 15 implying that Dimock, Pa.'s water has been given a clean bill of health. In the same statement to the press, EPA admitted that several families still have arsenic and methane in their water, but the news headlines are already proclaiming that the water in Dimock is safe.

Independent testing has found that 11 Dimock families' water is contaminated with explosive levels of methane, as well as heavy metals, radioactive material and fracking chemicals like ethylene glycol—commonly known as antifreeze. Would partial, preliminary test results convince you that Dimock's water was safe for your children to drink?

This mismanagement of the crisis in Dimock is just one of a long list of failures to protect citizens from the hazards of gas drilling. And the circumstances of Region 3’s press release raise more questions than answers:

Since Cabot Oil & Gas started drilling in Dimock in 2008, tap water has turned yellow and, in many cases, become flammable. Residents have experienced health effects including dizziness, nausea, rashes, headaches and respiratory problems. The long-term health effects of ingesting toxic drilling chemicals are still unknown, but Dimock residents don’t want to be the guinea pigs in an uncontrolled experiment.

When similar contamination was reported in Pavillion, Wyo., the EPA refused to release any results until full testing was complete. When it finally released results showing that the gas industry had poisoned Pavillion's water, the EPA let the data speak for itself instead of editorializing. We expect the same kind of balanced approach in Dimock.

EPA Region 3 jumped the gun. If we don't act now, the press will move on and Dimock will be forgotten. To help the residents of Dimock, call Shawn Garvin at (215) 814-2900 and tell him to follow through on his duty.

* In 2010, EPA Region 6 ordered Range Resources to provide drinking water to families in Northern Texas because of high levels of methane presented a “threat of explosion” and “imminent endangerment to the health of persons using those private drinking wells.” And earlier this year in Wyoming, EPA Region 8 announced their findings of fracking-related contamination in the town of Pavilion. EPA only announced results after a year of testing, during which time repeated tests found further contamination.