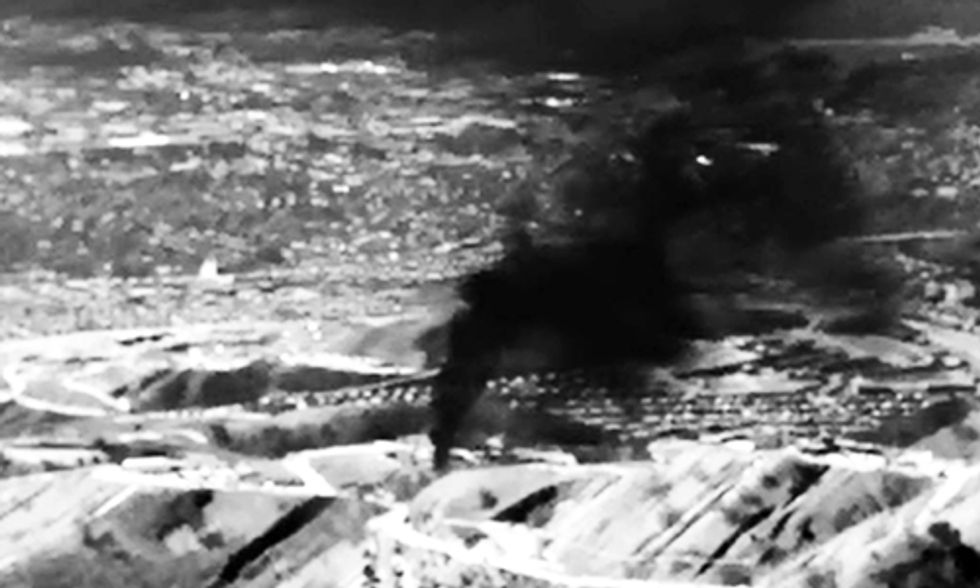 Following President Obama's promise to cut toxic methane leaks at oil and gas facilities, the U.S. Environmental Protection Agency (EPA) on Thursday announced the U.S. government's "first-ever" set of standards to reduce such emissions—but the new regulations were decried by environmentalist critics as not far-reaching enough.

"EPA's methane regulations are a welcome first step, but contain too many loopholes to be a comprehensive check on industry recklessness," warned Greenpeace researcher Charlie Cray.

Moreover, noted Cray, methane "is the fastest growing source of climate pollution in the U.S. In the first 20 years after it's released, methane is more than 85 times more powerful than CO2 in fueling climate chaos."

The EPA said that these latest rules were part of the Obama Administration's efforts to live up to the president's vow to reduce methane emissions by 40 to 45 percent from 2012 levels by 2025.

"The methane rule is the final version of a draft regulation put forth last year by the Environmental Protection Agency," reports the New York Times, "and would require oil and gas companies to plug and capture leaks of methane from new and modified drilling wells and storage tanks, not older, existing wells."

The EPA is only just starting the information-gathering process to determine how to regulate existing wells, the agency says. Yet it is old, established fossil fuel infrastructure that is responsible for the vast majority of methane emissions in the U.S. and many environmentalists are irked that the new rules stop short of regulating those facilities.

"The only way to protect our communities from the risks of fracking and stave off the worst impacts of climate change, is to keep fossil fuels in the ground. This rule, which does nothing to stop dangerous methane leaks from existing fracking wells, was always wholly inadequate," said 350.org's executive director May Boeve.

"The vast majority of the problem lies in the oil and gas infrastructure that already exists across the country," wrote the Natural Resources Defense Council. "EPA must follow through on the President’s commitment to address these sources next and soon."

Presidential hopeful Bernie Sanders joined fellow environmentalists in calling for an overall ban on fracking, rather than simply seeking to reduce methane leaks at fracking facilities:

Curbing methane leaks is a good step, but if we're serious about combatting climate change we must ban all fracking. https://t.co/I9osVpmvH6
— Bernie Sanders (@Bernie Sanders)1463067357.0

The new regulations are a tougher version of those first proposed last year. The standards were updated in response to nearly 900,000 comments critiquing the original version released in August 2015, the EPA said.

The problem of methane leaks from fracking facilities was brought to harsh light in October, when a disastrous leak near Los Angeles' Porter Ranch neighborhood started spewing tens of thousands of kilograms of the toxic gas into the air every hour—an catastrophic event that lasted for months on end.

Despite such disasters, the fossil fuel industry defended its record on combating methane leaks and complained that the EPA's regulations were too strict.

"Overly prescriptive regulations that limit energy access will only make manufacturers less competitive and send investments and jobs to countries with less stringent environmental protections related to energy and greenhouse gases," said the National Association of Manufacturers in a press statement.

Earthjustice promised to defend the EPA's regulations from the fossil fuel industry's expected legal assault on the new rules.

"Earthjustice will defend this rule in court when the oil and gas industry tries to weaken it," the organization declared. "It's past time for oil and gas companies to embrace best practices that could make the difference between catastrophic climate change and a secure future on a livable planet."