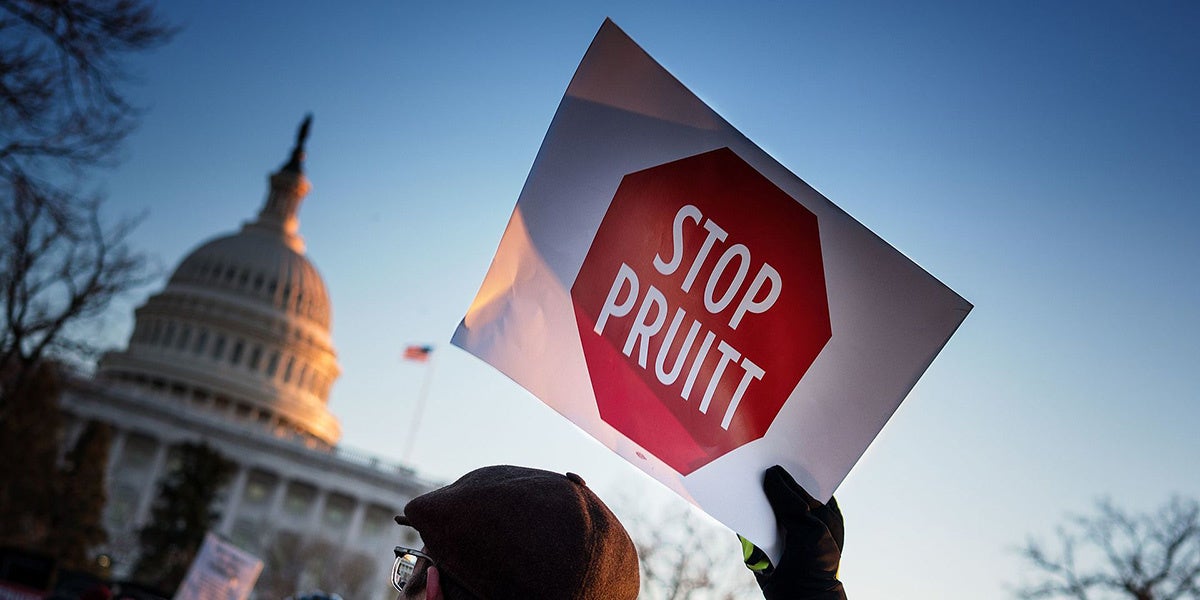 As the U.S. Environmental Protection Agency’s (EPA) polluter-friendly deregulatory agenda continues under the Trump administration, emails obtained by the Washington Post illustrate the cozy relationships between industry lobbyists and aides to scandal-ridden agency head Scott Pruitt, who is facing more than a dozen federal inquiries.

“The communication between the lobbyists and one of Pruitt’s top policy aides—detailed in emails the agency provided to Democratic Sens. Bill Nelson (Fla.) and Thomas R. Carper (Del.)—open a window on the often close relationship between the EPA’s political appointees and those they regulate,” the Post reported.

“Littered among tens of thousands of emails that have surfaced in recent weeks, largely through a public records lawsuit filed by the Sierra Club, are dozens of requests for regulatory relief by industry players,” the newspaper noted. “Many have been granted.”

In April 2017, for example, a golf industry representative sent a message to a then-associate EPA administrator that read in part: “Our guys walked out of that meeting amazed at the marked difference between our meeting today and the reception at EPA in years [past]. Please holler if we can ever help.”

Two days later, the World Golf Association chief executive sent the same EPA staffer a thank you message regarding the meeting, and wrote, “We appreciate your interest in both the general overview of the golf industry, along with our specific interest in repeal of the Clean Water Rule and subsequent development of a new Rule.” Igniting alarm among environmentalists, the EPA announced in late January that it was suspending the rule to create a new one.

While EPA spokesman Jahan Wilcox told the Post the lobbying groups “were dealing with the costly consequences of President Obama’s policies that expanded federal overreach while doing little for the environment,” Brendan Fischer, director of federal reform at the watchdog Campaign Legal Center observed that with Pruitt at the helm of the agency, there seems to be an “open-door policy towards the industries they are supposed to be regulating.”

“As these emails show, when lobbyists ask top EPA officials to jump, the answer is often ‘how high,'” Fischer said.

Even though the emails also show some efforts by Pruitt’s aides to contact environmental groups, such as John Walke, an attorney for the Natural Resources Defense Council (NRDC), Walke told the newspaper that “Scott Pruitt is at EPA only to serve the interests of polluting industries,” and “a few token meetings with environmental groups cannot hide his destructive agenda.”

The EPA's chief ethics officer, who has frequently defended Scott Pruitt’s actions since he took over the agency in February 2017, is now openly questioning whether Pruitt violated federal ethics rules. https://t.co/SKd9JjLJ4g

Meanwhile, citing a letter obtained by the New York Times via a Freedom of Information Act (FOIA) request, Eric Lipton reported on Saturday that the EPA’s chief ethics officer Kevin S. Minoli, once a defender of Pruitt, is calling for independent investigations into whether the administrator has violated federal ethics rules. Lipton also published a series of letters, obtained through the Sierra Club lawsuit, that Pruitt wrote to oil and gas executives shortly after he started at the EPA.

STICK WITH US FOR THIS THREAD: We know Scott Pruitt doesn't like to email (avoids creating a "paper trail") Turns out he DOES (or did) snail mail. Guess who he writes to? Oil & gas executives. Come along for the ride as we check out bit of his correspondence. BP America up first pic.twitter.com/FLQATlrmuo