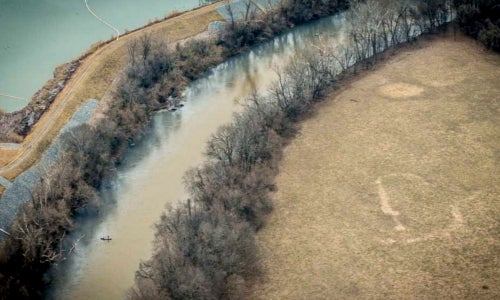 Less than two months after it was instructed to clean its coal-ash mess from North Carolina’s Dan River, Duke Energy has completed the job.

The U.S. Environmental Protection Agency and Duke both announced the cleanup’s completion this week. In February, Duke reported that it spilled 50,000 to 82,000 tons of coal ash into the river near Eden, NC. Based on those numbers, the spill was the equivalent of 413 to 677 rail cars of wet coal ash being poured into a public drinking water source. However, the company has since decreased its estimate down to 39,000 tons.

Duke only dredged about 2,500 tons of coal ash that had been found against a dam in Danville, VA, the Associated Press reported. Though the company only recovered a small portion of its spill, a coordinator said recent testing showed that concentrations of toxic metals were below federal limits and comparable to pre-spill levels.

“We continue to do some monitoring and will base our decisions for actions on the data collected,” the EPA’s on-scene coordinator Myles Bartos Bartos said. “But I don’t think there will ever be a removal again in the river. I think it has been adequately removed.”

Duke making its own announcement didn’t sit well with Waterkeeper Alliance, especially an attorney who has reason to believe the announcement came far too soon.

“This arrogant announcement from Duke Energy is the ultimate insult to the people North Carolina and Virginia whose river has been devastated by the company’s toxic ash spill,” Waterkeeper Alliance attorney Pete Harrison—who conducted testing on the Dan River after the announcement—said in a statement.

“Worse yet, Duke doesn’t even acknowledge the fact that there’s still a public health advisory declaring that the river is not safe to fish and swim in. Duke’s celebratory announcement that it ‘completed’ the clean-up threatens to mislead the public into think the danger has passed.”

Coal ash, which contains arsenic, mercury and more, made its way into the river after a pipe collapsed at a waste dump, turning the river gray for about 70 miles.

As a result of the spill, the EPA decided the company had to:

“Protection of public health and safety remains a primary concern, along with the long-term ecological health of the Dan River,” EPA Regional Administrator Heather McTeer Toney said before the cleanup.