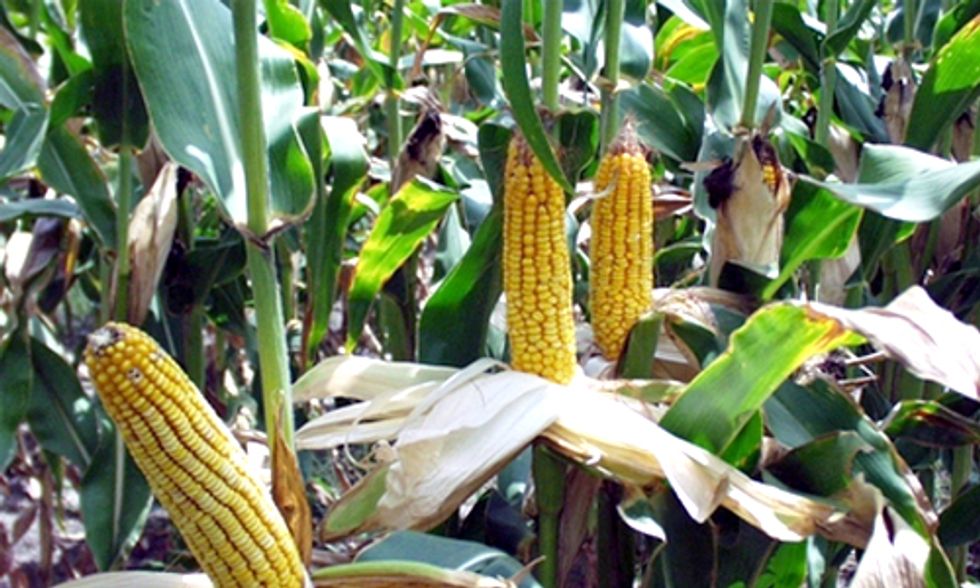 The U.S. Environmental Protection Agency (EPA) announced today approval, "with first-time ever restrictions," of the new herbicide Enlist Duo, manufactured by Dow AgriSciences. The pesticide is approved for use in Illinois, Indiana, Iowa, Ohio, South Dakota and Wisconsin. Approval is pending in 10 other states with public comments continuing through Nov. 14.

The new herbicide combo would be used in fields of corn and soybeans genetically engineered to be resistant to it. Photo credit: Center for Food Safety

The herbicide, designed to control weeds in fields of soybeans and corn genetically modified to resist it, combines two other herbicides, 2, 4-D and glyphosate. Dow produced the new combo herbicide in response to the growing resistance of weeds aka "superweeds" to commonly used glyphosate herbicides such as Monsanto's Roundup.

According to the EPA, its decision is based on "a large body of science and an understanding of the risk of pesticides to human health and the environment."

It goes on to note that "dozens of other countries" have approved the use of the chemicals and says, "EPA scientists used highly conservative and protective assumptions to evaluate human health and ecological risks for the new uses of 2,4-D in Enlist Duo. The assessments confirm that these uses meet the safety standards for pesticide registration and, as approved, will be protective of the public, agricultural workers and non-target species, including endangered species."

Many farmers agree that more chemicals are not the best way to grow.
Photo credit: Shutterstock

"To ensure that weeds will not become resistant to 2,4-D and continue increased herbicide use, EPA is imposing a new robust set of requirements on the registrant," says the decision. "These requirements include extensive surveying and reporting to EPA, grower education and remediation plans. The registration will expire in six years, allowing EPA to revisit the issue of resistance. In the future, the agency intends to apply this approach to weed resistance management for all existing and new herbicides used on herbicide tolerant crops."

Environmental and food safety groups were less than impressed by these safety precautions.

The Center for Food Safety condemned the decision, pointing out that 2, 4-D has been linked to immune system cancers, Parkinson's disease, endocrine disruption and reproductive issues, with children at particular risk, and that studies have shown that the new herbicide will lead to more resistant superweeds.

“Monsanto's Roundup Ready crops led us down this futile path of chemical dependency," said the group's executive director Andrew Kimbrell. "Now imagine Roundup on overdrive. Why are our agencies listening to the chemical companies and not the scientists, doctors and lawmakers who know that more chemicals are not the answer to the superweed problem?"

Oregon Congressman Peter DeFazio, one of 60 members of Congress to sign a letter opposing Enlist Duo's approval, said, "Today, EPA shunned its duties to protect the environment and safeguard public health by bowing to corporate interests instead of relying on science. For years, the scientific community has been sounding the alarm about the increased use of herbicides and the link to a multitude of health problems. It's shocking that EPA thinks it's a good idea to allow the widespread use of a toxic chemical once found in Agent Orange on this nation's farm fields. EPA should be working to reverse the trend of chemicals that poison our food supply, water and soil. It will be just a matter of time before weeds develop a resistance to 2,4-D, and the chemical industry comes up with an even more dangerous and potent product."

"It's very disappointing that EPA is giving the green light to a massive increase in use of 2,4-D, which has been linked to some very serious illnesses, without adequately assessing the impacts on public health," said Earthjustice attorney Paul Achitoff said. “EPA hasn't bothered to consult the expert agencies about the herbicide's effects on endangered plants and animals. Instead it made the absurd assumption it will have no effect at all. This heedless action merely perpetuates the endless cycle of more genetically engineered crops leading to more pesticide use, leading to more of the same."

The Center for Biological Diversity condemned the EPA's failure to consult with the U.S. Fish and Wildlife Service about the herbicide's purported safety around endangered species.

“This was an unbelievably foolish decision," said Brett Hartl, endangered species policy director at the Center for Biological Diversity. "Enlist Duo will harm dozens of endangered species and is another nail in the coffin for the monarch butterfly. Once again the EPA has turned a blind eye to endangered species, clean water and human health in its apparently endless desire to placate multinational pesticide companies. At a minimum, the agency needs to restrict use of this new chemical cocktail around streams, endangered species habitats and our communities. The monarch butterfly's migration is one of America's most awe-inspiring natural phenomena, and the EPA is willing to throw it all away just to get one more pesticide product on the market—it's shameful."

Monarch butterfly populations have declined steeply, and increased use of herbicides has been implicated.
Photo credit: Shutterstock

Both Earthjustice and the Center for Food Safety said they will explore legal recourse.

“EPA has turned its back on those it purports to protect—the American people and our environment," said Kimbrell. “In the wake of our government's abdication of its responsibilities, Center for Food Safety will pursue all available legal options to stop the commercialization of these dangerous crops."