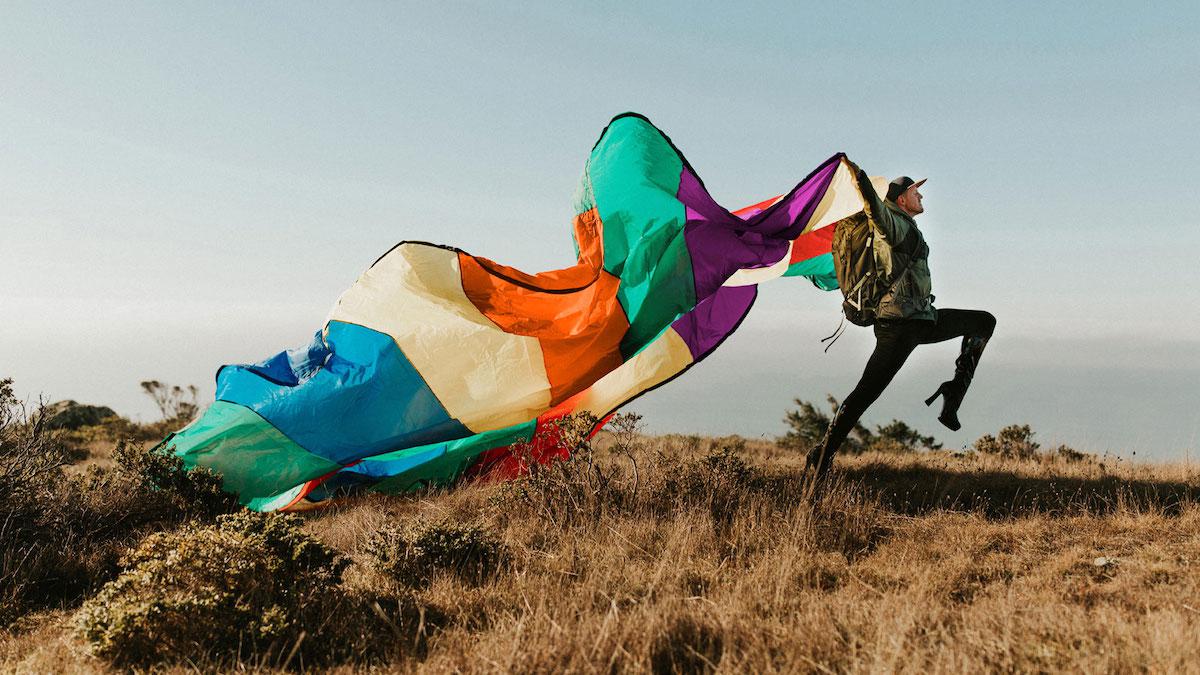 Pattie Gonia is an environmentalist drag queen on a mission to build a more inclusive climate movement.

Pattie has more than 300,000 followers on Instagram, where she shares photos and videos of herself hiking and camping, both in and out of drag. She’s posed next to an oil rig to push for fossil fuel divestment and created a gown made of actual trash to raise awareness about plastic pollution.

She uses her platform to challenge conventional representations of what a climate activist and outdoorsperson looks like and to speak up about environmental issues. She also brings LGBTQ+ people and allies together for in-person hikes and outdoor gatherings – helping create safe, inclusive communities of people who love nature and are committed to protecting it.

Out of drag, Pattie is Wyn Wiley, a professional photographer. Yale Climate Connections spoke with Wiley about how becoming Pattie has changed his life, building a climate movement that’s rooted in creativity and joy, and creating sustainable drag fashion.

Yale Climate Connections: When did you first become passionate about the outdoors?

Wyn Wiley: I’m from Nebraska – the middle of everywhere – and growing up, nature to me was my grandma’s farm. It was miles and miles of corn fields. It was my backyard. Some of my earliest childhood experiences were performing “Cats,” the musical, jumping off of my swing set in my backyard, performing for an audience of literally no one.

Those were my first experiences really in the outdoors, which then translated into [in] middle school and high school being a part of Boy Scouts, which was a really toxic and really beautiful environment where I really got into backpacking for the first time and got into the outdoors, as it was told to me – that exclusive space of mountain tops and bagging peaks and surviving in the wilderness. And so that presented an interesting dissonance to my little childhood queer experiences of performing a musical in my backyard.

YCC: Tell me about how Pattie was born. What inspired you to post pictures of yourself in drag hiking and doing outdoor activities?

Wyn Wiley: Growing up in Nebraska as a queer person was an environment that made me be everything that I wasn’t, to try to fit in – including after I came out. I came out of the closet and I was still hit with conditional love from everywhere in my life – of, “We love you but… never paint your nails. Never do drag. Never become trans.”

The first time I did drag, it was this unbelievable experience of femininity and beauty, and a complete side of myself that I had left on the sidelines for my whole entire life. And it was such a beautiful night.

But as life happens, photos and stories and the word got back to my home community, and I lost a lot of people. Actual clients canceled their work with me, and I had best friends that slowly just started to tiptoe out of my life. And it was so painful that I took these high-heeled boots that I wore that night, put them my closet, and said, “‘F’ this. It’s too hard. It’s too much. I don’t want to do this. I’ll just get back to living life as everyone else wants me to live.”

And it wasn’t until I was packing for a backpacking trip six months later that I was looking literally in my closet, and I saw those boots, and I saw this backpack, and I said ‘Well, what if I just pack these boots into this backpack?’ And so I did. And when we reached summit on this backpacking trip, I put those high-heeled boots on, started taking some photos, started taking some videos, and went home after that trip, edited this video on the couch next to my mom, posted it to this joke Instagram account, and woke up the next day to like 11 million views on the video. And it was just a very surreal experience. It was this moment of, am I going to choose myself or am I not?

When I think back to that experience of wearing high heels in the outdoors for the first time, I just remember feeling like, no one’s out here to judge me. I think I told myself for forever that the queer experience is to run to metropolitan environments for safety, for community. And I think what Pattie has shown me in my life is that queer community exists in the outdoors. And the outdoors is such an essential place for any queer person to discover pieces of who they are, and to try out new versions of themselves – versions of themselves that are way more aligned than maybe the body they were born in or the identity that they have held onto because of society.

I really think that nature, if we’re letting it do its thing, shows us that binaries don’t exist. There is never just an either/or. And I think for a queer person to see that in nature – when I saw that in nature – my life changed.

YCC: Can you talk about how you include your environmentalism in your fashion choices as Pattie?

Wyn Wiley: I think that Mother Nature is the best designer on this planet. So much of my drag fashion is inspired by nature – is inspired by birds or butterflies or even natural patterns. I also really love queering normal outdoorsy tropes and doing variations on things like, what can I do to take this tent and turn it into a dress? Or how can I work with this incredible sustainable designer to make a dress that really represents this environmental issue or climate issue? So, for example, that could be anything from creating a dress out of different pieces of plastic and micro-plastics all the way to making a dress that literally turns into a fully functional tent. It really runs the gamut. But drag is such a fun playground, fashion is such a fun playground, to get to mirror my ethics in my art form.

With that said though, it’s a struggle. It’s something that I do not do perfectly. Most all wigs, if they’re synthetic, are literally made of plastic. So I think about, “How can I use the same three or four wigs and style them different ways, or outfit repeat, or not buy new makeup but use the makeup I have until its last little bit?”

But having it be always on my mind, thinking about creative solutions, keeps it really fun and makes it a challenge within a challenge. Every drag look, every fashion moment, is already a creative challenge. But I feel like it adds another fun beautiful layer to figure out how we can be mindful of sustainability too.

YCC: How are you helping people break free from conventional expectations of who is supposed to be enjoying the outdoors, and how?

One of the biggest joys in living life as Pattie has been building in-person community – whether that’s on group hikes where we’re taking groups of 10, 20, 30, 40, 50 people out on the trail, often for the first time. Or whether that’s organizing backpacking trips that are queer affinity spaces for queer people and non-binary people and trans people to get into the back country, often for the first time

Or whether that’s meeting people where they’re at in metropolitan environments, and really thinking about what it means to remove barriers of access to these “outdoor” experiences. What does it look like to take a group hike through a city or local park? What does it look like to host a panel in that park and not even hike at all? We’re always just thinking about trying to switch it up and really trying to redefine what people view as outdoorsy.

I think that we really need to redefine what outdoor experiences are, because I know I can’t get away all the time to go be surrounded by a mountainous landscape. I see so much beauty in a bird outside my window.

So I really want that for everyone. I want people to realize that no matter how nature appears in their life – you know, maybe it’s literally a cornfield, just like it was for me, for a majority of your life – that’s nature. And I think we can connect to it.

And I think that if we can get outdoors, if we can fall in love with nature, we’re going to advocate even better for it. Because we fight for what we love.

YCC: What does a more inclusive climate movement look like to you?

Wyn Wiley: I feel like in my life I’ve viewed the climate movement from two completely different angles. I viewed it as an outsider before Pattie was born, when I was looking at the climate space as white and straight and privileged.

And now I feel like these awakenings that we’re having across the world – about the importance of intersectionality, or about how much climate change disproportionately affects marginalized people – have made me realize that a future is possible in the climate movement where, when we’re asking ourselves what we can do for climate, it is so much more than just going to grad school for climate and doing policy in DC – which is such an important world, but is never a world that I feel intersects with myself, and my life, and my unique abilities to make an impact.

When we ask ourselves what we can do for climate, I think if we start with questions like, what identities do we hold? What brings us joy? What’s the work that needs to be done? What are we good at? If we can start with our ethnicity, our culture, our sexuality, our values and beliefs, as the deepest roots of our climate work, and that climate work reflects truly who we are, I think we’re going to be even more motivated to chase it. I think if we think about what brings us joy and gets us out of bed in the morning and what skills we’re good at – maybe that’s photography, maybe that is deep climate research, maybe that’s community organizing, maybe that’s just being an incredible ally and supporting other people that are the leaders – these things all matter. So I think if we can intersect at those questions, we can arrive at an answer that truly will leave us even more motivated to do climate work and make it a longstanding piece of our lives.

And I think we really need to think about – no matter who we are in the climate movement – whether you are studying climate at Yale or whether you are doing field work or whether you’re doing volunteering work – it is all about, how can we communicate the work we’re doing to a community, to people to bring them in. And how can we create an environment and communication that doesn’t have barriers around it? Because people aren’t going to sit there and read a 40-page research paper. I think we really need to be thinking about the communication element, the collaboration element, and how we’re sharing that story with the world, so that we can bring new people into the climate movement. At the end of the day, I really want to encourage every single person that does climate work to make it community-based and communicate the work that they’re so passionate about with the world.