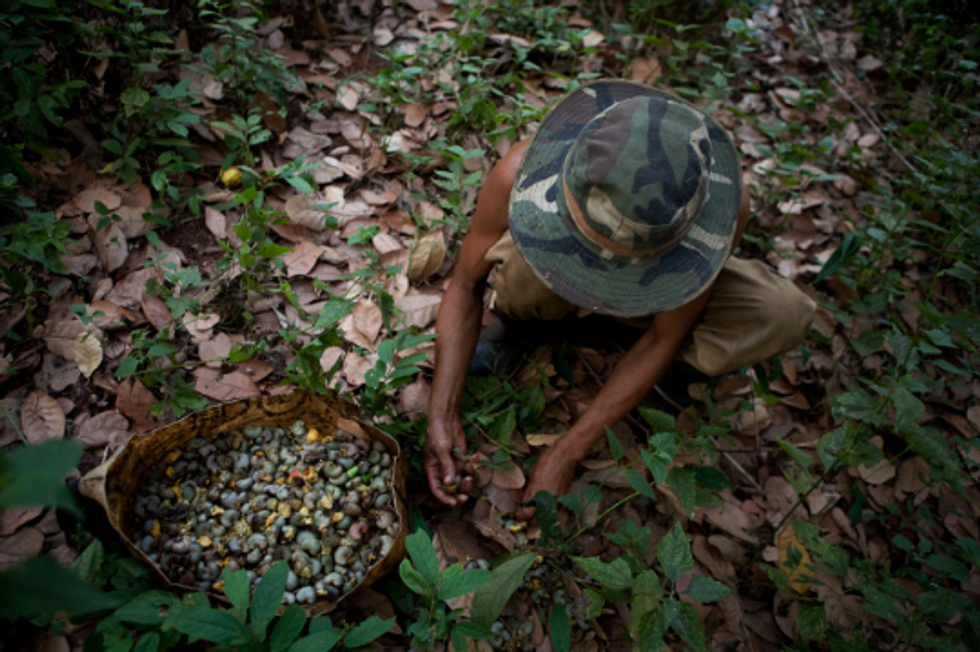 Development progress in the world’s poorest countries could be halted or even reversed by mid-century unless bold steps are taken now to slow climate change, prevent further environmental damage and reduce deep inequalities within and among nations, according to projections in the 2011 Human Development Report, launched by the United Nations Development Programme (UNDP) Nov. 2.

The 2011 report—Sustainability and Equity: A Better Future for All—argues that environmental sustainability can be most fairly and effectively achieved by addressing health, education, income and gender disparities together with the need for global action on energy production and ecosystem protection. The report was launched in Copenhagen Nov. 2 by UNDP Administrator Helen Clark with Danish Prime Minister Helle Thorning-Schmidt, whose new government has pledged to reduce Denmark’s CO2 emissions by a dramatic 40 percent over the next 10 years.

As the world community prepares for the landmark UN Conference on Sustainable Development in June 2012 in Rio de Janeiro, the report argues that sustainability must be approached as a matter of basic social justice, for current and future generations alike.

“Sustainability is not exclusively or even primarily an environmental issue, as this report so persuasively argues,” Helen Clark says in the foreword. “It is fundamentally about how we choose to live our lives, with an awareness that everything we do has consequences for the seven billions of us here today, as well as for the billions more who will follow, for centuries to come.”

UNDP has commissioned the editorially-independent Human Development Reports each year since 1990, when its Human Development Index (HDI), a composite measure of health, education and income, first challenged purely economic measures of national achievement and called for consistent global tracking of progress in overall living standards.

Between 1970 and 2010 the countries in the lowest 25 percent of the HDI rankings improved their overall HDI achievement by a remarkable 82 percent, twice the global average. If the pace of improvement over the past 40 years were to be continued for the next 40, the great majority of countries would achieve HDI levels by 2050 equal to or better than those now enjoyed only by the top 25 percent in current HDI rankings, the report notes—an extraordinary achievement for human development globally in less than a century. Yet because of escalating environmental hazards, these positive development trends may instead be abruptly halted by mid-century, the report contends, noting that people in the poorest countries are disproportionately at risk from climate-driven disasters such as drought and flooding and exposure to air and water pollution.

Despite the human development progress of recent years, income distribution has worsened, grave gender imbalances still persist and accelerating environmental destruction puts a double burden of deprivation on the poorest households and communities, the report says. Half of all malnutrition worldwide is attributable to environmental factors, such as water pollution and drought-driven scarcity, perpetuating a vicious cycle of impoverishment and ecological damage, the report notes.

High living standards need not be carbon-fueled and follow the examples of the richest countries, says the report, presenting evidence that while CO2 emissions have been closely linked with national income growth in recent decades, fossil-fuel consumption does not correspond with other key measures of human development, such as life expectancy and education. In fact, many advanced industrial nations are reducing their carbon footprints while maintaining growth.

“Growth driven by fossil fuel consumption is not a prerequisite for a better life in broader human development terms,” Helen Clark said. “Investments that improve equity—in access, for example, to renewable energy, water and sanitation, and reproductive healthcare—could advance both sustainability and human development.”

The report calls for electricity service to be provided to the 1.5 billion people who are now off the power grid—and says that this can be done both affordably and sustainably, without a significant rise in carbon emissions. This new UN-backed Universal Energy Access Initiative could be achieved with investments of about one-eighth of the amount currently spent on fossils fuel subsidies, estimated at US$312 billion worldwide in 2009, according to the report.

The report adds its voice to those urging consideration of an international currency trading tax or broader financial transaction levies to fund the fight against climate change and extreme poverty. A tax of just 0.005 percent on foreign exchange trading could raise $40 billion yearly or more, the report estimates, significantly boosting aid flows to poor countries—amounting to $130 billion in 2010—at a time when development funding is lagging behind previously pledged levels due to the global financial crisis.

“The tax would allow those who benefit most from globalization to help those who benefit least,” the report argues, estimating that about $105 billion is needed annually just to finance adaptation to climate change, especially in South Asia and sub-Saharan Africa.

· Expanding reproductive rights, health care and contraceptive access would open a new front in the fight against gender inequality and poverty, the report contends. Reproductive rights can further reduce environmental pressures by slowing global demographic growth, with the world population now projected to rise from 7 billion to 9.3 billion within 40 years.

· The report argues that official transparency and independent watchdogs—including news media, civil society and courts—are vital to civic engagement in environmental policymaking. Some 120 national constitutions guarantee environmental protections, but in many countries there is little enforcement of these provisions, the report says.

· Bold global action is urgently required for sustainable development, but local initiatives to support poor communities can be both highly cost-effective and environmentally beneficial, the report emphasizes. India’s Rural Employment Guarantee Act cost about 0.5 percent of GDP in 2009 and benefited 45 million households—one-tenth of the labour force. Brazil’s Bolsa Familia and Mexico’s Oportunidades programmes cost about 0.4 percent of GDP and provide safety nets for about one-fifth of their populations.

The authors forecast that unchecked environmental deterioration—from drought in sub-Saharan Africa to rising sea levels that could swamp low-lying countries like Bangladesh—could cause food prices to soar by up to 50 percent and reverse efforts to expand water, sanitation and energy access to billions of people, notably in South Asia and sub-Saharan Africa.

By 2050, in an environmental challenge scenario factoring in the effects of global warming on food production and pollution, the average HDI would be 12 percent lower in South Asia and sub-Saharan Africa than would otherwise be the case, the report estimates. Under an even more adverse environmental disaster situation—with vast deforestation, dramatic biodiversity declines and increasingly extreme weather—the global HDI would fall 15 percent below the baseline projection for 2050, with the deepest losses in the poorest regions.

Environmental deterioration could undermine decades of efforts to expand water, sanitation and electricity access to the world’s poorest communities. “These absolute deprivations, important in themselves, are major violations of human rights,” the authors say.

UNDP partners with people at all levels of society to help build nations that can withstand crisis, and drive and sustain the kind of growth that improves the quality of life for everyone. On the ground in 177 countries and territories, we offer global perspective and local insight to help empower lives and build resilient nations. Visit UNDP's website here.