Environmental Scorecard: How Your Elected Officials Voted in 2012 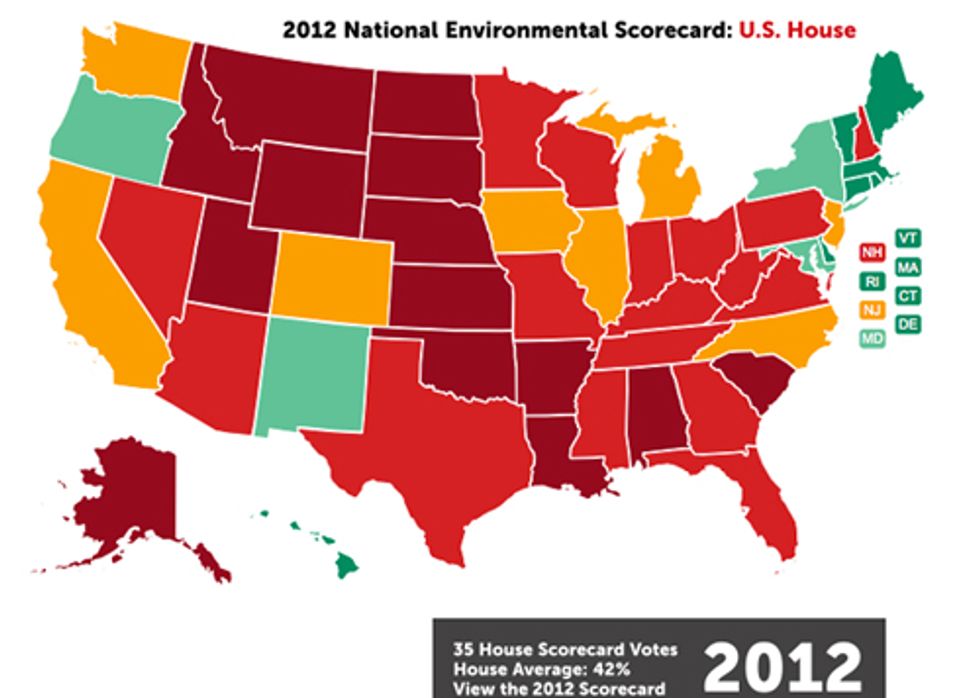 From an environmental perspective, the best that can be said about the second session of the 112th Congress is that it is over. Indeed, the Republican leadership of the U.S. House of Representatives continued its war on the environment, public health and clean energy throughout 2012, cementing its record as the most anti-environmental House in our nation’s history.

This dubious distinction is all the more appalling in light of the climate crisis unfolding around the world: much of the country experienced extreme heat waves and severe drought throughout the summer of 2012 while the Arctic sea ice reached its lowest extent on record. Hurricane Sandy brought even more devastation and destruction, and was followed by the news that 2012 was the hottest year on record in the U.S.

The 2012 the League of Conservation Voters (LCV) National Environmental Scorecard includes 35 House votes, which is the same number as in the 2011 Scorecard, but far more than were ever included in any Scorecard before that. These 35 votes are what we consider the most significant House votes on the environment from throughout the year.

Many others warranted inclusion and would have been included in a typical year. In fact, all told there were more than a hundred House votes on the environment and public health in 2012. In many cases, only final passage votes are included, even though lawmakers voted on countless amendments with enormous environmental implications. With rare exception, amendments to improve anti-environmental bills failed, while amendments to make them even worse passed.

Over the course of the year, the U.S. House left virtually no environmental issue untouched. They forced votes on sweeping bills attacking cornerstone environmental laws such as the Clean Air Act, Clean Water Act and National Environmental Policy Act.

One bill to gut the Clean Air Act was so breathtaking it was dubbed “The War on Lungs." There were also countless attempts to promote drilling at all costs, including a bill so brazen it was dubbed “Oil Above All.” There was also a ruse of a transportation bill that would have increased our dependence on oil, threatened our coasts and other special places, and legislatively approved the harmful Keystone XL tar sands pipeline while doing nothing to advance a forward-looking transportation policy.

There were massive assaults on our natural heritage, including national monuments, national parks, national forests, coastlines and wildlife such as salmon, sea turtles and migratory birds. And even as evidence of the growing climate crisis became painfully obvious, a majority in the U.S. House repeatedly voted against efforts to confront it.

The good news is that while the U.S. House voted against the environment with alarming frequency, both the U.S. Senate and the Obama administration stood firm against the vast majority of these attacks. There are 14 Senate votes included in the 2012 Scorecard, many of which served as a sharp rebuke of the House’s polluter-driven agenda.

A particular highlight in the Senate was the decisive and bipartisan defeat of a resolution of disapproval under the Congressional Review Act to prevent the U.S. Environmental Protection Agency (EPA) from ever regulating power plants’ emissions of mercury pollution, a dangerous neurotoxin. The Senate also voted down harmful proposals to drill off our coasts and in the Arctic Refuge, to legislatively approve the Keystone XL tar sands pipeline, and to block the U.S. EPA from reducing harmful pollution from industrial boilers—the nation’s third largest source of mercury pollution. Unfortunately, efforts to repeal billions in wasteful subsidies to the five largest oil companies failed, while efforts to extend critical clean energy tax credits fell short until the last-minute, year-end deal averting the “fiscal cliff”—the simultaneous expiration of income and other tax breaks and the onset of deep, across-the-board budget cuts known as sequestration.

While the Senate helped ensure that the nation’s bedrock environmental protections survived the House’s anti-environmental crusade, the Obama administration achieved a great deal in 2012 through administrative actions such as finalizing fuel efficiency and global warming standards for cars, proposing the first-ever rule to reduce carbon pollution from new power plants and designating three national monuments.

As President Obama begins his second term and the 113th Congress gets under way, LCV is grateful to the Obama administration, the Senate, our allies in the House and the millions of people across the country who helped stop the dangerous proposals put forward by the House Republican leadership throughout 2012. While we do not have high hopes for progress from the House in 2013, we are heartened by the many pro-environment members who were elected to the 113th Congress and look forward to working with them. We also look forward to continuing to work with President Obama, who has the ability to make great progress through executive actions. More than ever, we remain committed to confronting the climate crisis through all possible avenues in order to protect the planet for future generations.