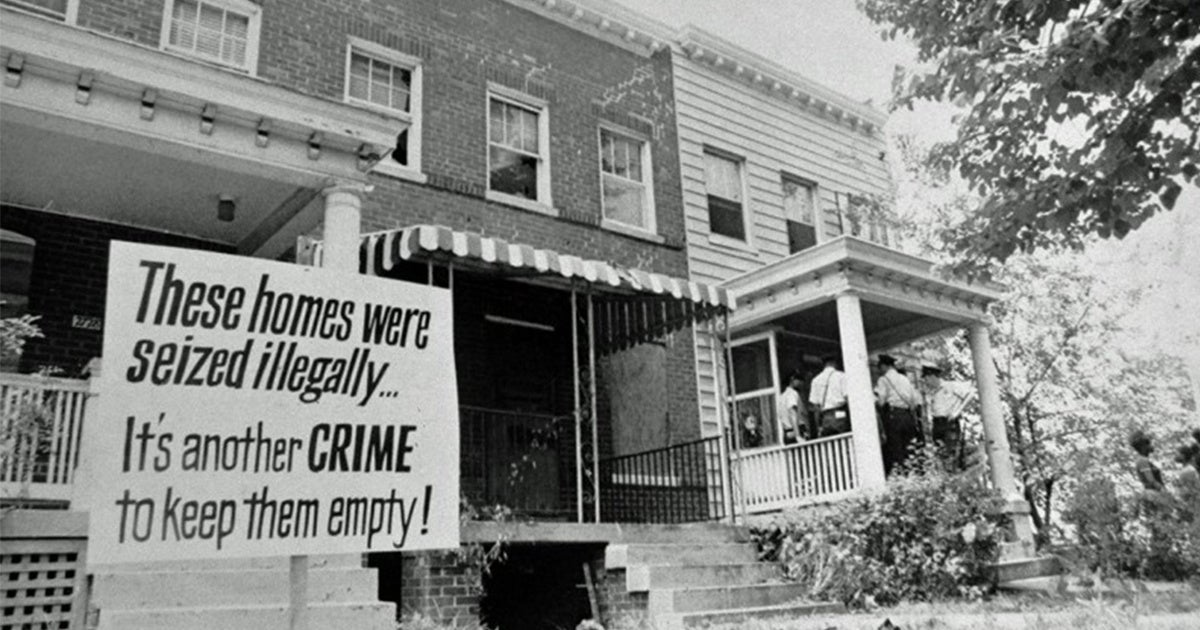 Homes in Washington, DC's Brookland neighborhood were condemned to clear room for a highway in the 1960s. The community fought back. Brig Cabe / DC Public Library

In the summer of 1969 a banner hung over a set of condemned homes in what was then the predominantly black and brown Brookland neighborhood in Washington, DC. It read, “White man’s roads through black men’s homes.”

Earlier in the year, the District attempted to condemn the houses to make space for a proposed freeway. The plans proposed a 10-lane freeway, a behemoth of a project that would divide the nation’s capital end-to-end and sever iconic Black neighborhoods like Shaw and the U Street Corridor from the rest of the city.

Today, Brookland is not home to an interstate. The community’s protest forced the government to cancel its construction plans. And the activists’ efforts helped spur the passage of a law that gives all people the right to weigh in on projects that affect their communities — a right that is now under attack from the Trump administration and its allies.

Residents taking a stand in Brookland were the latest participants in the “Freeway Revolts,” a multi-decade effort to force federal planners to consider the impacts of large development projects on communities and ecosystems. During and after World War II, 6 million Black people moved from the South to cities in the Midwest and California, drawn by employment opportunities and driven by the violence and poverty of the Jim Crow South. Following this demographic shift and growth in cities across the U.S., planners rewrote municipal zoning ordinances and separated residential, commercial and industrial development. These policies promoted urban sprawl and white flight, which fed the culture of automobile dependency.

The Freeway Revolts formed alliances across lines of race and socioeconomic status. In DC, wealthy white residents of Takoma Park and Georgetown allied with middle-class black and brown residents in Brookland. In Seattle, the Black Panthers aligned with the Sierra Club in opposition to highway widening proposals. In San Francisco, Latinx communities joined hands with white residents to protest the Central Freeway’s devastation to homes and communities. These various communities realized how disruptive and destructive these large urban planning projects are to neighborhoods and communities.

Activists demonstrate against proposed freeway construction in San Francisco in 1960.

Lacking a voice in the development process, residents and community members in cities across the country used tactics that ranged from picketing, petitioning and leafleting to directly occupying facilities. In each case, however, the central message was the same: Government should not ransack homes, divide areas and introduce new sources of smog and noise pollution without the consent of those affected.

In many places, the protests forced city governments to change their plans, or even led to the removal of freeways that had already been built. At the federal level, the protests helped inspire a law that ensures the people get to weigh in on projects that affect their health, homes and neighborhoods: the National Environmental Policy Act (NEPA). This law has become one of the most important tools to protect communities and our environment — and now, it’s under attack by the Trump administration.

In 1969, after over a decade of relentless pressure and public activism, Congress passed NEPA in a nearly unanimous vote. The aim of the law was to create a national environmental policy that equally weighed environmental impacts and the voices of communities when federal agencies developed infrastructure projects. NEPA was the first law to require the federal government to conduct an environmental impact study (EIS) when embarking on a project. It required the federal government to tell the public what it wanted to develop and establish time for communities to comment and offer environmentally friendlier or less disruptive alternatives; alternatives the government must consider under NEPA. 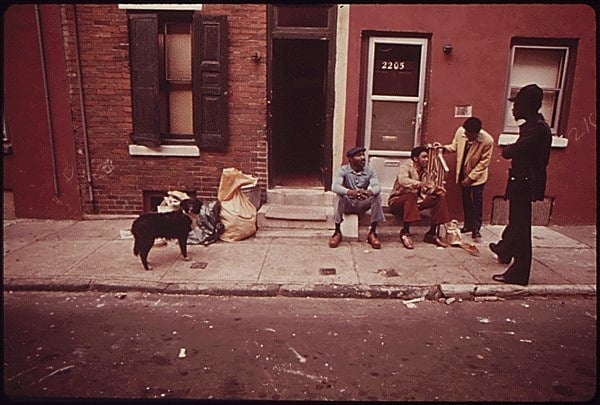 Community leaders heightened the national consciousness of the effects of environmental degradation on communities throughout the second half of the 20th century.

Over the years, it is communities of color — whose efforts made NEPA possible — that have invoked the law when seeking justice. After all, more than half of the people living less than two miles from a toxic waste site in the U.S. are people of color. Children of color are disproportionately more likely to face the dangerous health effects of lead poisoning. Indigenous communities like the Navajo Nation have been face-to-face with toxic water thanks to the legacy of uranium mining in the Southwest. In the Northern Mariana Islands, indigenous and low-income U.S. citizens are using NEPA to compel the U.S. Navy to consider the effects that artillery, rockets and bombardment will have on their tropical homeland and sacred sites. According to Cinta Kaipat, a resident of the island Saipan, NEPA allows communities to “fight this fight without firing a shot. The military will sit up and hear our voices.”

Right now, communities of color are using NEPA to challenge the Keystone XL pipeline, President Trump’s illegal border wall, waste incinerators in Puerto Rico, intrusive transit plans in Los Angeles and pollution from the KCI Airport in Kansas City. The Northern Cheyenne Tribe in Montana successfully used NEPA to thwart Trump administration’s plans to reopen coal-mining leases on public lands. Ill-conceived development along the I-70 Corridor near Denver stopped thanks to NEPA. It is community voices, not those of polluting and profit-driven corporations with armies of well-paid litigators and lobbyists that are most likely to be excluded or ignored in the decision-making process. And it is their voices that can help stop further division and destruction in our environments if they are made a part of the planning process.

Put simply, the National Environmental Policy Act is a tool to help uplift the people’s environmental voice. That’s why it’s no wonder that the Trump administration and its allies want to stifle it, either by exempting certain proposals from oversight, limiting the length of public comment periods or eliminating public comment altogether. 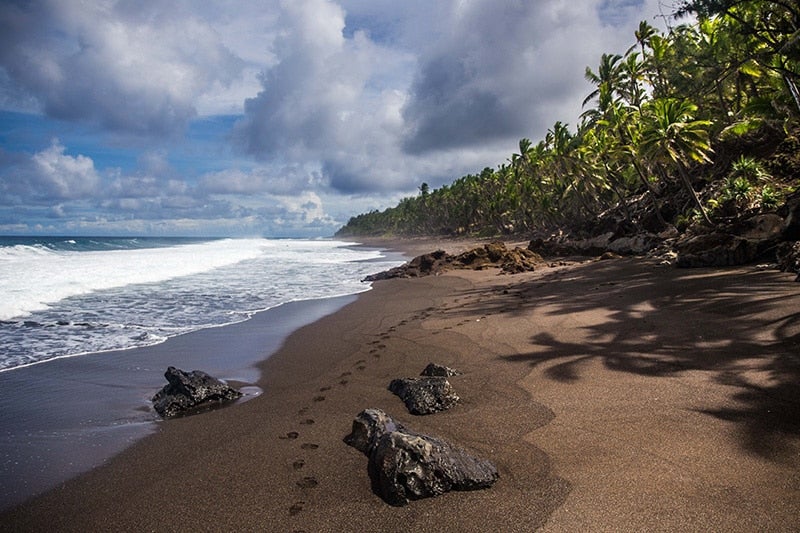 Communities in the Northern Mariana Islands are using NEPA to challenge the U.S. Navy’s plan to conduct live-fire training on the island of Pågan.

The spirit that drove communities of color and neighborhood residents throughout the U.S. to hang banners, picket, sit in and stand up in the 1950s and 1960s is alive today. Even though several communities of color across the nation have been displaced and burdened by pollution because of freeway development projects in the 1960s, NEPA helps to fight against exclusionary and environmentally disruptive planning processes.

As we fight to end environmental racism, we cannot allow the Trump administration and its allies in Congress to retrench the people’s tools for access to justice. We cannot allow them to limit public comments and continue to shut communities out of the NEPA process. It is through direct action and community engagement that NEPA came to be; safeguarding it gives people more power to be a part of the decisions that determine what happens in their communities.

Reposted with permission from our media associate Earthjustice.