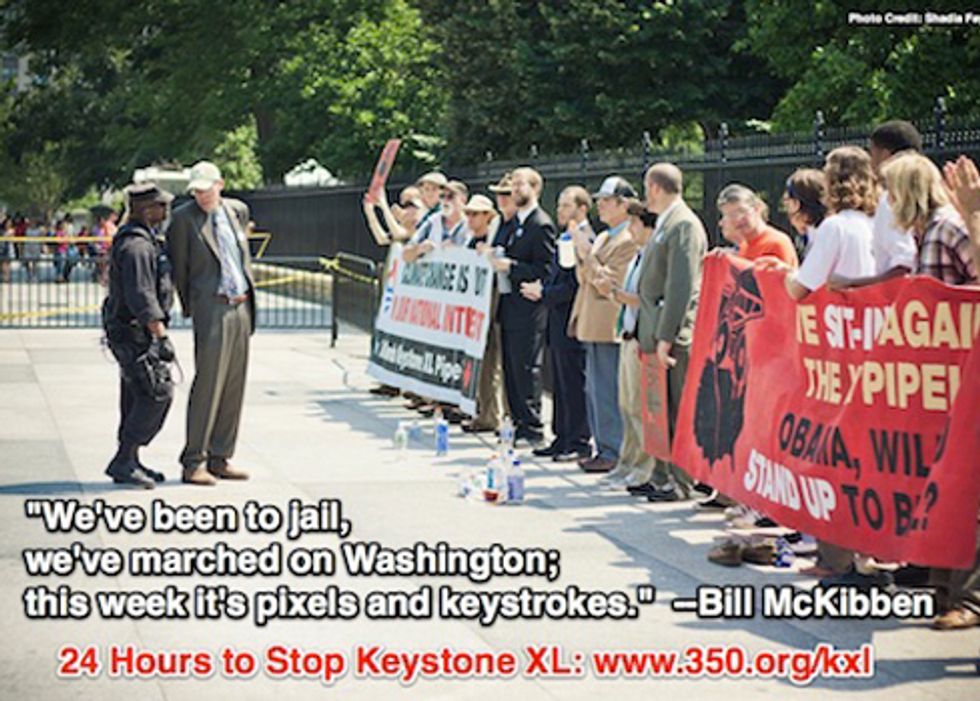 It's Feb. 13, and just over an hour ago 350.org and a coalition of more than 30 progressive groups, environmental campaigns, businesses and blogs launched a 24-hour drive to send more than 500,000 messages to the Senate opposing the Keystone XL tar sands pipeline. The timing is crucial—starting today, oil-soaked Republicans are going to be attempting to saddle a transportation bill with an amendment that would override President Obama's decision to reject Keystone XL and push approval of the project.

The push is off to an incredible start. In just the first hour of emails and Facebook posts, we've rocketed by 100,000 signatures. Dozens of groups have yet to go out with their email blasts yet and social media is just beginning to light up.

Earlier this morning, Robert Redford put up a post on Huffington Post that caught on like wildfire. Activist Naomi Klein has been rallying her 100,000+ Twitter followers for hours. Blogs like Grist.org have gotten in on the fight, with multiple posts and graphics to inspire the cause. Donors have stepped in to sponsor online ads at places like Daily Kos and other progressive sites.

"It's really moving to see what's going on," said Bill. "We're up against the most profitable enterprise on earth and they have all the money they could ever want, so we've had to find different currencies to work in all year. We've spent our bodies—some of us on this call have been off to jail. We've spent our time and energy—tens of thousands have surrounded the White House last fall and protested in every Congressional district in the country. Now, for the next 24 hours we're spending our pixels and our keystrokes."

While the next 24-hours' concentrated burst of online activism is a new development for the Keystone XL fight, social media has been key to the struggle since the very beginning. The fight against the pipeline sprang onto the national landscape last summer, when Bill McKibben and a group of other indigenous and environmental leaders wrote a letter inviting people to come to Washington, D.C. during the last two weeks of August and take part in a sit-in at the White House. The letter quickly spread across Facebook and Twitter and sign-ups began flowing in. As Linda Capato, one of the national organizers of the sit-in, has said, the sign-ups for the sit-in practically took care of themselves. People soon started ride-boards to coordinate travel to Washington, D.C. A Facebook group of arrestees soon sprang up. Videos and photos from the protest spread like wildfire. And by the end of August, when the last of 1,253 people had been taken away from the White House in handcuffs, Keystone XL had become the most prominent environmental fight in a generation.

"The Keystone XL fight has galvanized our 2.5 million members more than any other issue," the President of CREDO Mobile, Michael Kieschnick told reporters on the call this morning. "That's because they know the stakes."

Michael Brune, the executive director of the Sierra Club, echoed the point. "Our members are fired up about this. When we've been sending out Keystone XL emails, we've been seeing higher response and open rates than about anything we've been doing on any issue over the last couple years."

The levels of enthusiasm led to more powerful offline action last fall. Pipeline protestors, largely coordinating over twitter and small email list-serves that sprung up across the country, managed to meet President Obama at every campaign event he did after August. In Colorado, a Native American leader interrupted the president's speech and pushed him on the pipeline. "I hear your concerns and we're looking at them closely," the president responded, in a video that quickly spread far and wide. The offline action culminated on Nov. 6, when more than 12,000 people completely surrounded the White House to protest Keystone XL. A few days later, President Obama did what months ago had seemed unthinkable—he rejected the permit and sent the pipeline back to the drawing board.

Now, environmentalists are mobilizing to protect that victory as Senate Republicans team up with Big Oil to try and resurrect the project. The latest online surge came together in just a few days and is a powerful show of force, as well as nimbleness on the part of environmental and progressive groups.

"In a sense, this push is representative of some of the generational transition that's underway in the environmental movement," explained McKibben. "There's a generation that's savvy in all sorts of different ways to make politics work and bring new voices to the floor. The young people across these organizations have made this thing happen over the last 72 hours, which is when we started sending out the call about this. It's amazing the coordination they've had underway. At some level, it's not surprising, the motivation is not that different than what led to the fight against PIPA and SOPA a few weeks ago. This is the environmental movement's equivalent and it's going to be large."

There's no guarantee the effort will work, but it's an amazing thing to watch unfold.

As Bill put it, "It's important to remember that we've been behind since the very beginning of this fight. The National Journal ran a poll of its 'energy insiders' last summer and 97 percent of them said there was no way the president would reject the pipeline, but he did. No kidding, we're at a disadvantage in the Senate. That's because we don't have as much money as the other side and can't make campaign contributions and so forth. But what we do have is numbers. Money power may still find itself on the short end of the stick against people power."