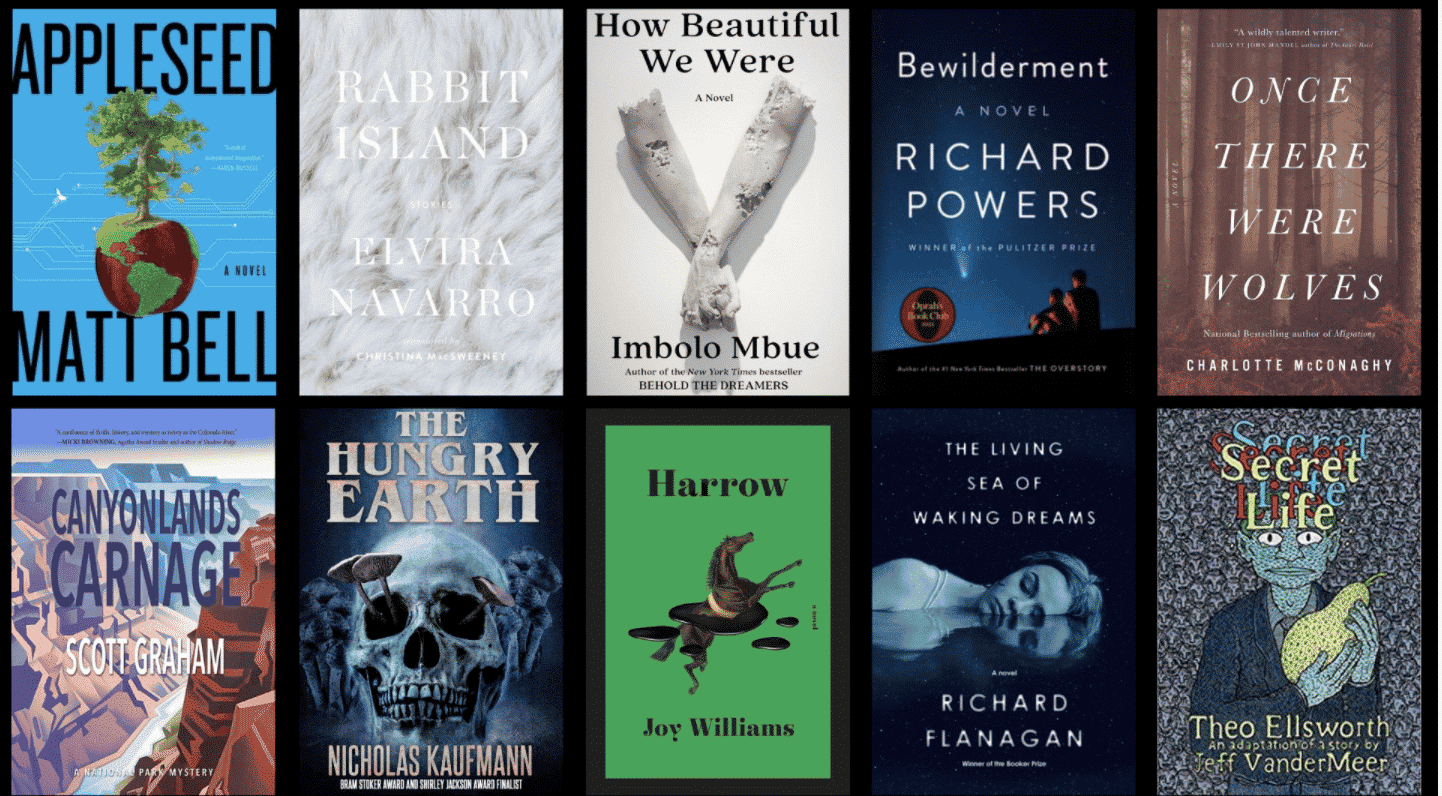 The collective unconscious is telling us something…

These days more and more artists are turning their feelings about climate change, environmental justice and the extinction crisis into powerful creative works. It’s easy to see why. These issues affect just about everybody — a new recent study found that about 85% of people on the planet already live with the effects of global warming — and that leaves us all with a lot of fear and grief.

That’s where fiction comes in. Whether it’s literature or pop culture, serious or satire, novels and short stories can help us investigate both our inner and outer worlds. Authors’ imaginations, meanwhile, can remind us of the beauty and mystery of the world we’re trying to save (or call out the ugliness of what’s destroying it).

We’ve pulled together 12 environmentally-themed novels released so far in 2021, from a list that seemed to get longer every day. They include the latest from a Pulitzer Prize-winning author, literary and mystery novels, a comics adaptation and even a horror story. (Well, they’re all horror stories, in a way.)

These aren’t full reviews — we’re still digging into this reading pile ourselves — but the descriptions should give you enough to pick the titles that speak to you, your communities and your rapidly changing world.

I’ll admit, I’m late to Powers’ Pulitzer Prize-winning and much-lauded Overstory, but I’m finally reading it right now (and it is, of course, stunning). His new one, which examines the broader world through the lens of endangered species, looks just as good. I’m not going to try to read them both at the same time — that’d probably be a Powers overkill — but I’ve already seen a preview of Bewilderment and I’m looking forward to diving into it as soon as I get a chance.

Once There Were Wolves by Charlotte McConaghy

A novel about wolf reintroduction to Scotland from the author of Migrations. McConaghy looks at the complex relationships we have with predators and the awful things some people do rather than relearn how to coexist with nature — perfect components for drama.

How Beautiful We Were by Imbolo Mbue

An African village stands up against decades of colonialism and pollution wrought by an American oil company. The pain they suffer, and the corporate doublespeak they receive in response, should resonate with readers in any community struggling for environmental justice. We need more books like this (and more real-world equivalents, too).

The first new novel in 11 years from the brilliant author of The Changeling and The Quick and the Dead. Really, what more do you need to know?

An ambitious greed-vs-nature novel sprawled across the centuries. One part takes place in the 1700s, another 50 years from now, and the third follows a man who may be the last living human, 1,000 years in the future. Can the characters come back from this dystopia? Can we?

This surreal short-story collection, translated from Spanish by Christina MacSweeney, isn’t environmental from cover to cover (some of the stories are just weird), but it does feature nightmarish tales of havoc-wreaking invasive animals (the titular lagomorphs) and a critter returned from supposed extinction (who doesn’t appear very happy about its fate).

Yosemite Fall, an earlier novel in the National Park Mystery series, came out when public lands faced increasing threats from the Trump administration. The immediate threat may be gone for now, but the long-term dangers to public lands and wild spaces remain. Although there probably aren’t as many real-world murders as in this book, set at … well, you can probably guess from the title.

The Living Sea of Waking Dreams by Richard Flanagan

This month marks the start of breeding season for orange-bellied parrots, among the world’s most endangered birds, who migrate between Tasmania and mainland Australia. Five years ago, only 17 of these birds existed following decades of habitat loss, invasive species, pet trade depredations and multiple disease outbreaks. Today, thanks to captive breeding, that number stands at 192 — still perilously low, but it’s progress. Few of us will ever get a chance to see an “OBP” in person, which is why I’m looking forward to reading this magical-realism novel that uses the birds, the extinction crisis and last year’s Australian fires to examine the nature of grief and loss (as well as grief over the loss of nature).

What does it mean to live at the end of the world — and what’s it like when someone new suddenly arrives from beyond the walls? Originally published in German, this unique fable was translated by Jen Calleja.

Nightmares of a different sort pervade Secret Life. Ellsworth, one of my favorite artists, adapts a surreal VanderMeer short story into graphic novel form. The tale takes place in a horrifyingly familiar office building, where human nature goes awry and plants and mice have a way of invading the narrative and the workers’ lives.

The Hungry Earth by Nicholas Kaufmann

Something fungi this way comes… Just in time for Halloween we’ve got this new eco-horror novel about an invasive killer fungus disturbed from its underground slumber and ready to take over the world. I’m not sure if I’m emotionally prepared to read a novel about an outbreak after 19 months of the pandemic, but I’ll admit that I’m hungering for some good old-fashioned “Earth strikes back” horror, which reminds us that this planet can shake us off if it really tries.