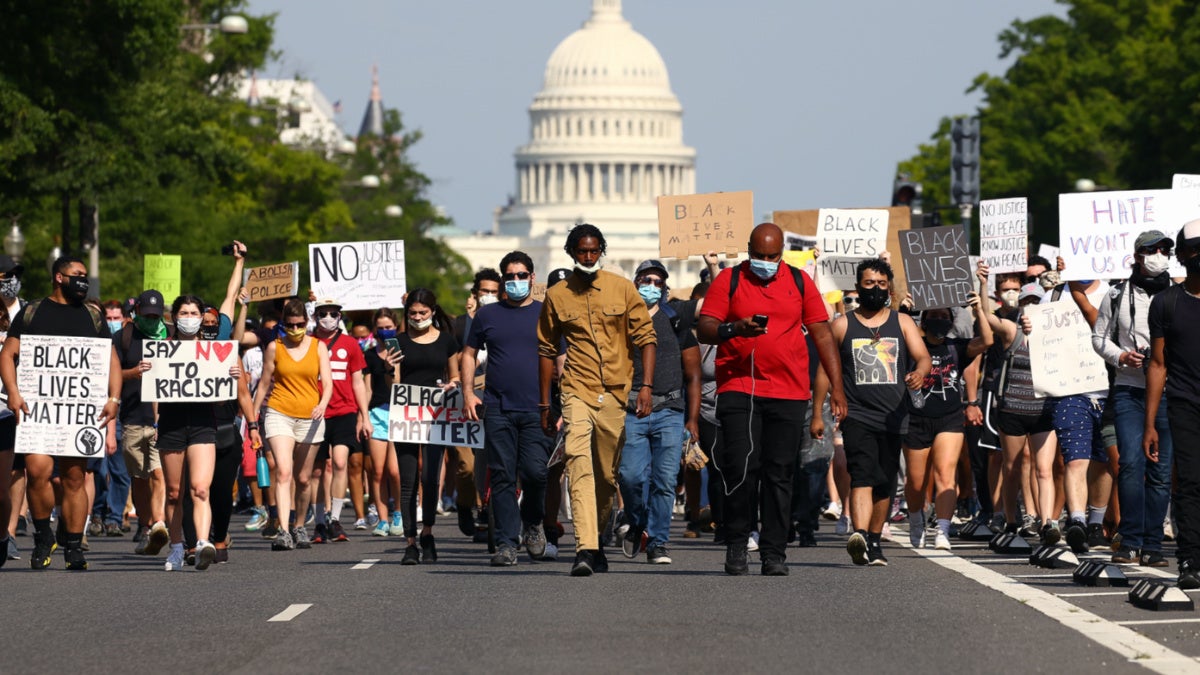 Demonstrators march down Pennsylvania Avenue near the Trump International Hotel during a protest against police brutality and the death of George Floyd on June 3, 2020 in Washington, DC. Tasos Katopodis / Getty Images

This year has brought us some brutal lessons so far, chief among them the fact that systemic racism drives or amplifies nearly all our societal and environmental ills.

Now is the time to listen to the people affected most by those problems of environmental justice and racism — and the activists working to solve them.

Here’s a good place to start: We’ve gathered 16 essential recent books on environmental racism and related topics from leading journalists and experts. Two of these are hot off the presses and scheduled to hit shelves this month, while the rest were pulled from previous “Revelator Reads” installments. All provide vital insight into the problems that plague people and the planet, while also offering solutions for a more just future.

Since we’re still in the middle of a pandemic — another problem made worse by racial injustice — it obviously remains challenging to visit local bookstores and libraries, so these links all go to publishers’ sites, where you can order hard copies or e-books. You can also find enough information to order any of these books from local stores, which may offer delivery or curbside pickup.

This list is hardly exhaustive and pulls mostly from books published over the past two years, and it weighs a bit heavily on Indigenous authors and protests like Standing Rock. So please feel free to recommend any insightful books we missed.

The founder of the Greening Youth Foundation provides a critique of the too-white environmental movement and a toolkit for engaging younger participants from African American, Latinx and Native American communities.

As Long as Grass Grows: The Indigenous Fight for Environmental Justice, from Colonization to Standing Rock by Dina Gilio-Whitaker

The history of Indigenous resistance may offer all of us the strength we need to keep fighting, from the coauthor of “All the Real Indians Died Off” and 20 Other Myths About Native Americans.

Youth to Power: Your Voice and How to Use It by Jamie Margolin

An essential book by one of the country’s most engaging youth activists. Margolin, a queer Latinx, cofounded Zero Hour and helped energize 2018’s record-breaking Youth Climate March. Now she shares her experience and expertise — along with that of other young activists — and offers advice on everything from organizing peaceful protests to protecting your mental health in a time of crisis. Greta Thunberg provides the foreword.

Environmental Justice in a Moment of Danger by Julie Sze

As we’ve seen many times over the years, activists standing up for environmental justice often face violent reprisal. This academic book examines the what Sze calls the “historical and cultural forces and resistance to violence, death, and destruction of lives and bodies” to reveal guideposts for future (and hopefully safer) action.

Climate Change From the Streets by Michael Méndez

Méndez argues that the climate crisis is also a crisis for public health, especially in lower-income communities of color, and that both problems can only be solved by addressing issues of environmental justice. His book — subtitled “How Conflict and Collaboration Strengthen the Environmental Justice Movement” — taps into Méndez’s own research into California communities and grassroots activism to show how the problems that plague us can also bring us together — but only if we invite everyone to the table.

More than a dozen top minds come together to examine thoughts and cultural processes otherwise ignored by the environmental movement.

A Terrible Thing to Waste: Environmental Racism and Its Assault on the American Mind by Harriet A. Washington

This book will open your eyes, make you angry, and then point you toward solutions for ending the plague of pollution-related health problems in marginalized communities of color.

This two-volume series provides a powerful primer for activism on social-justice and environmental issues, using examples from more than 50 resistance movements around the world. The first book discusses how to build movements, while the second examines strategies for change.

When pollution harms your physical, financial and spiritual health, it’s more than an injustice. But that’s what happens time and time again in Indian Country. This book addresses situations ranging from Standing Rock to uranium mining on Navajo and Hopi lands through lenses of colonization, sovereignty and — perhaps most importantly — victory.

Poisoned Water: How the Citizens of Flint, Michigan, Fought for Their Lives and Warned the Nation by Candy J. Cooper with Marc Aronson

We’ve already seen several bestselling and powerful books address the Flint water crisis, but this is the first one specifically written for young-adult readers. When you consider that kids were among the worst affected by the Flint tragedy, that makes this a story they need to read and understand — so they can grow up and help prevent it from happening to anyone else.

Unearthing Justice: How to Protect Your Community From the Mining Industry by Joan Kuyek

Covering everything from how to stop a new mining project to figuring out how to clean up an abandoned mine, this important book offers activists a primer for taking on all manner of extractive industries that can harm human health and the environment.

Whose Water Is It, Anyway? Taking Water Protection Into Public Hands by Maude Barlow

One of the world’s most notable water-justice activists provides a step-by-step guide to help communities keep themselves from going dry due to the actions of irresponsible companies and governments.

Standing With Standing Rock: Voices from the #NoDAPL Movement edited by Nick Estes and Jaskiran Dhillon

An essential volume to understand the history and significance of the famous resistance action, combining everything from essays and interviews to poems and photography.

One Earth: People of Color Protecting Our Planet by Anuradha Rao

This book for pre-teen readers delivers 20 short biographies of activists around the world who are working to save everything from trees to dolphins to people. In the process, it hopes to inspire the next generation of activists — especially those who might not have seen themselves represented in the still all-too-white environmental movement.

Farming While Black: Soul Fire Farm’s Practical Guide to Liberation on the Land by Leah Penniman

A how-to guide for ending racism and injustice in our country’s food system, both on farms themselves and in nutrition-starved African American communities. Bonus: The same techniques improve the soil, treat livestock humanely, preserve rare plant varieties and provide benefits for the climate.

Who Killed Berta Cáceres? Dams, Death Squads and an Indigenous Defender’s Battle for the Planet by Nina Lakhani

Honduran indigenous leader and activist Berta Cáceres won the prestigious Goldman Prize in 2015 — one year before she was murdered for her work trying to stop a hydroelectric dam from destroying a sacred river. This powerful book tells the story of her life and death, a tragedy echoed in the murders and assaults committed against hundreds of environmental defenders every year.