The Environmental and Human Cost of Making a Pair of Jeans 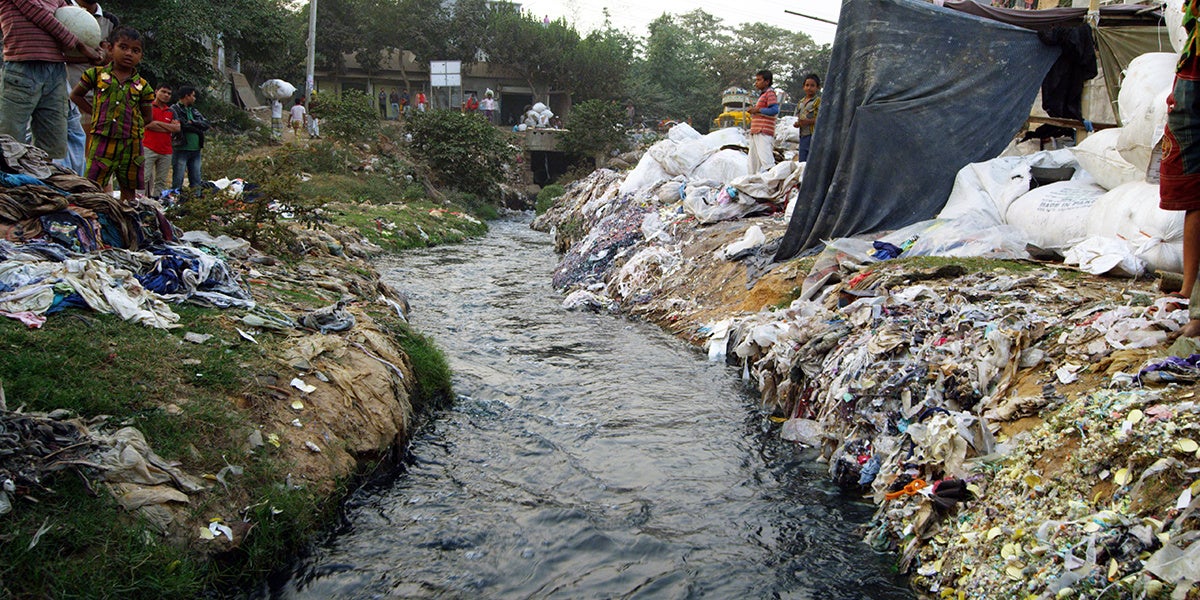 Americans do love their denim, so much so that the average consumer buys four pairs of jeans a year. In China’s Xintang province, a hub for denim, 300 million pairs are made annually. Just as staggering is the brew of toxic chemicals and hundreds of gallons of water it takes to dye and finish one pair of jeans. The resulting environmental damage to rivers, ecosystems and communities in China, Bangladesh and India is the subject of a new documentary called The RiverBlue: Can Fashion Save the Planet?.

It is estimated that 70 percent of Asia’s rivers and lakes are contaminated by the 2.5 billion gallons of wastewater produced by that continent’s textile industry. In scene after scene in the film, the dark frothy spill off can be seen rushing out of dye facilities while a cadre of scientists and environmental experts detail the public health crisis that has resulted from the largely unregulated manufacturing process.

Co-directed by award-winning documentarians David McIlvride and Roger Williams and produced by Lisa Mazzotta, RiverBlue has won 13 awards globally including Best Documentary at Raindance in London and will be receiving the Green Drop Award from Filmambiente at the World Water council on World Water day, March 22. Three years in the making, the film follows internationally celebrated river conservationist, Mark Angelo, as he paddles the rivers devastated by the chemical waste and the local communities who rely on these rivers for drinking and bathing. These communities suffer from a high incidence of cancers, gastric, skin and related issues afflicting both their residents and factory laborers. 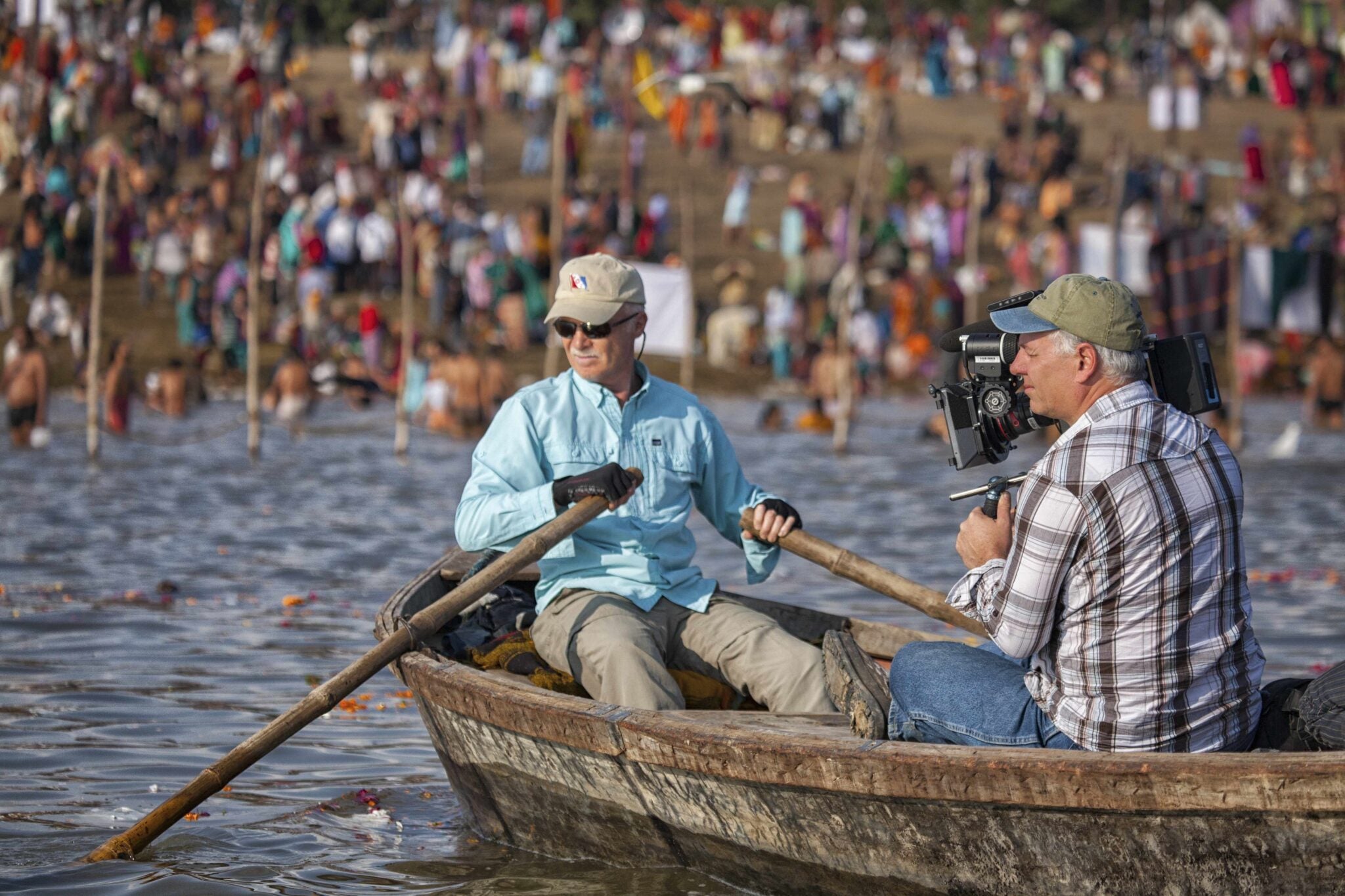 Mark Angelo (left) paddles a river devastated by a toxic brew of chemical waste from the denim and leather industries with Roger Williams (right).RiverBlue

The Chemicals in Your Jeans

What makes the process of making jeans so poisonous to people and planet? Consider just one of the most popular types of jeans today—distressed. To get that “lived in” look, denim is subjected to several chemical-intensive washes. Campaigners from the environmental group Greenpeace, who tested the outflows near dyeing and finishing facilities in the top denim producing towns in Asia, found five heavy metals (cadmium, chromium, mercury, lead and copper) in 17 out of 21 water and sediment samples taken from throughout Xintang one of the locales featured in the project. Toxic campaigners in China also discovered heavy metals like manganese, which can be associated with brain damage, in the rivers.

These chemicals don’t stay put. They can also be transported to our North American oceans, atmosphere and food chains and accumulates in places far away from their original source.

Where Should the Change Be?

The question the film poses to viewers: Are brand-name clothing corporations disregarding the environment in their zeal to make their clothes faster and cheaper for the consumer? “Low cost clothing has a high cost attached to it, one to the environment and public health,” explains Angelo.

The solution the film’s producers unveil is two-fold: through innovation and consumer education there can be change.

Director David McIlvride was determined to find brands making jeans which didn’t do damage to the environment. He found the father of distressed jeans: Francois Girbaud who introduced the eponymous stone washed jean decades ago. “It took 40 yrs. before we realized what we made and what we did was wrong,” says Girbaud of using permanganate in the 1970s. “If people knew that the spraying of permanganate on your jeans to give you that acid- wash look was killing the guy doing the spraying, would you still want that look? I don’t think the customer is aware of what is happening abroad. We have to change the process of making jeans and brands have to be willing to invest because we are destroying the planet,” says Girbaud.

A Better Jean Through Technology

In California now, the designer was trying to re-establish himself as manufacturer of good jeans when McIlvride found him. “He led us to the Spanish company, Jeanologia where they distress jeans by engraving images on the fabrics with lasers (light and air) and eliminating water without increasing the cost,” says McIlvride. They are now considered a leading industry innovator. 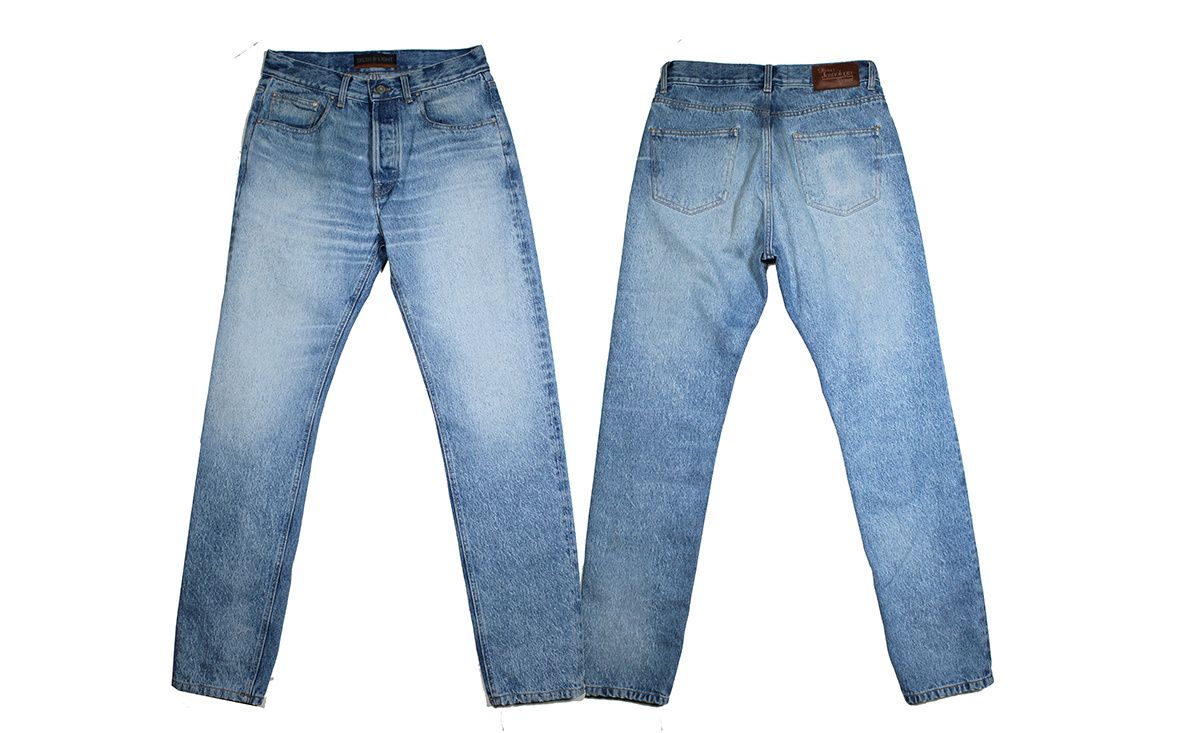 It was a trip to China in the mid 90s that made Alex Penadés and the other execs at Jeanologia want to change the way they did business. At the time the company was a jeans washing consultancy for finishers researching and investigating industry solutions.

“Once we saw the pollution in the rivers and the workers exposed to the chemicals we knew we had to innovate.” Jeanologia now creates technology to treat and finish jeans (giving them a certain feel or aesthetic). “We started searching for ways to make garments in a more sustainable way. We have been dyeing clothes with water since the beginning of time and we faced the reality that even though it had been done this way in the mass consumer world, it was not sustainable,” explains Penadés.

Jeanologia began working with Girbaud in 2003 and still does. They developed several technologies using light and air to finish jeans using little water and no chemicals. “It wasn’t pretty at first and for designers the look is the most important thing,” he says referring to their first prototypes back in 1996. “It took us a while to get better to convince industrial finishers to make that shift,” says Penadés who works with brands like Levi Strauss, V.F. Corp (makers of Lee and Wrangler)., PVH Corp. (Calvin Klein, Tommy Hilfiger), Inditex (Zara), H&M, Uniqlo and Marks & Spencer among others. Today, laser technology can give a pair of jeans a worn look instead of sandblasting or hand sanding which can be lethal or detrimental to workers and the environment. Their G2 ozone treatments introduced in 2005, fade down the color of a jean instead of using chemicals like bleach or hypochloryte. In 2011, they unveiled eflow technology that uses air (nanobubbles) instead of water to dye jeans and give them properties like softness and wrinkle repelling. The company is also expanding, working on the technology for knits, wool, cottons and blends. 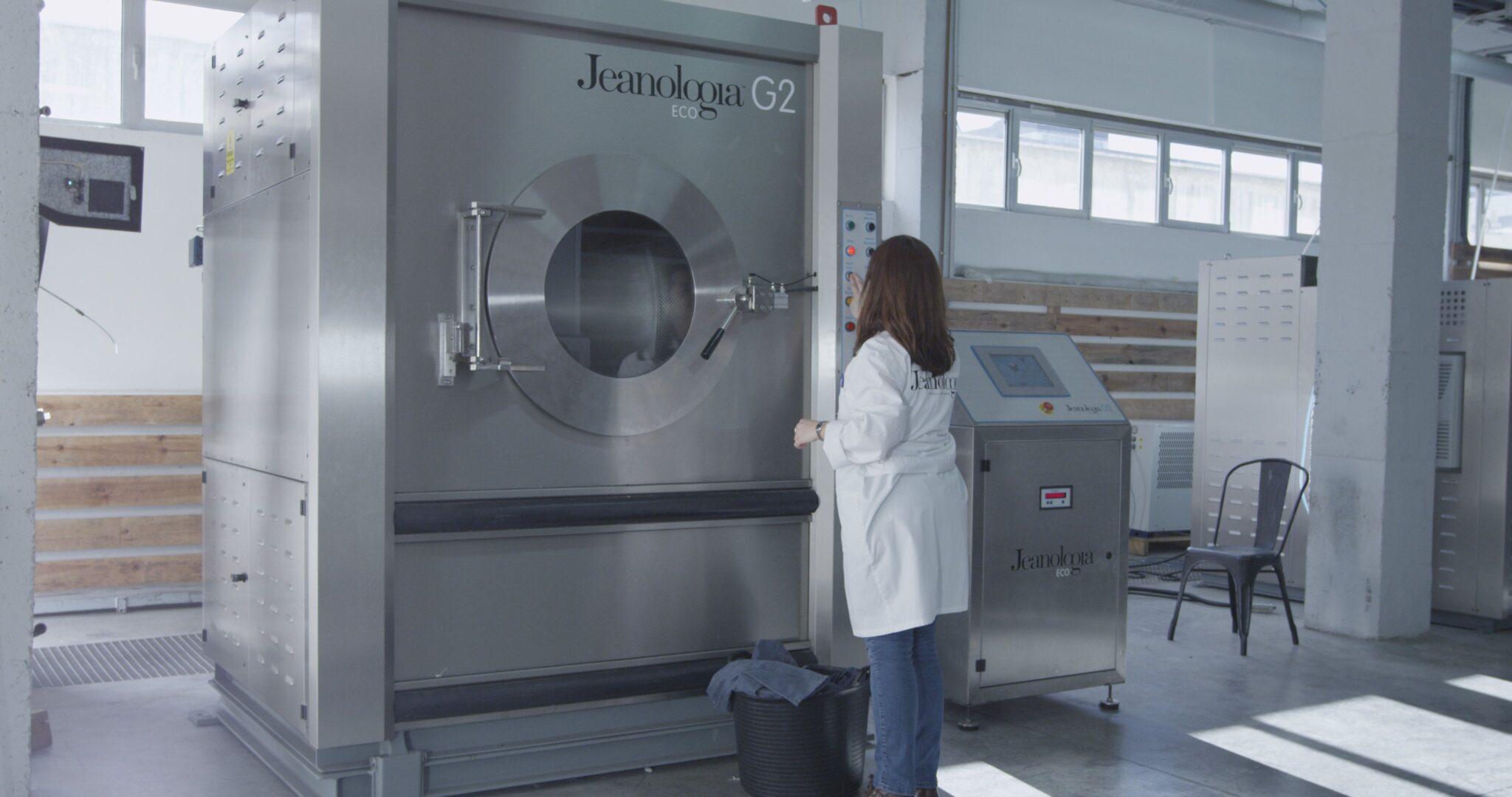 Using these innovations, an average pair of jeans requires just a glass of water to finish when it used to require 300 liters. “It requires a big capital investment,” says Penadés of the technology. Depending on the business model the capital investment is made by the dyeing and finishing facilities or brands. “In the beginning it was like preaching in the desert,” he says. “Everyone was comfortable doing things in the same way as always. Why should anyone change their methods of production if they are doing well?”

Jeanologia has Environmental Impact software to measure the footprint of every style and brands know where they are and how they can improve. Penadés has seen the tide started to change. Three years ago, about 16 percent of the jeans in the world were made in a sustainable way he says. Now 35 percent of the jeans are made more sustainably. “About 6 billion pairs of jeans are made a year so that means 2 billion pairs are now being made in a more sustainable way.”

While filming the movie, most denim manufacturers barred the filmmakers from shooting inside their facilities. Italdenim, one of three denim manufacturers in Italy, invited them to film at their facility. President Luigi Caccia had been making denim for more than 40 years when he too realized rivers were dying and workers were becoming sick from the chemicals they were exposed to. In 2014, he sought to create a cleaner dyeing process. First his company invested in a machine, the only one of its kind in the world, that takes indigo dye and uses electrochemicals (Co2 and O2) and no water to make the colors for their denim.

They then found a company using chitosan, which comes from the waste of the food industry (it is the natural derivative of chitin which is the exoskeleton of shrimp and crab) and applied it to the yarn after dyeing it. “It creates a shell to protect the color so dyes will not rub off and less dye is needed overall to color the denim. This new process saves chemistry, water and energy and is biodegradable. Because there are no chemicals, the process doesn’t create skin problems. “Your skin absorbs 65% of what you put on it, good or bad. We introduce chemicals to our skin with the food we eat, the environment we live in and our clothes. You can choose if you want to smoke or not but no one tells you that your denim may be harmful to your body,” says Caccia.

The Cost to Make a More Sustainable Jean

Italdenim sells their denim to 30-40 brands around the world including Joe’s Jeans and Mother Jeans in the U.S. “It was important to find solutions that did not increase the cost of the fabric so it would be available to all. If a brand wants to buy a sustainable denim it should cost the same as the alternative. We should be able to produce that or we should find ourselves a new job.”

Penadés says brands have a choice to manufacture in a traditional way or a sustainable way. “The water and energy of traditional production is costly and so is pollution. Today, including the capital investment, you can produce the same product at the same price. Brands can do it. If the consumer is aware they have to request these kinds of products today. Consumers must also know what their impact on the environment is because of their acts of consumption. It’s all about co-responsibility.”

Girbaud agrees. He now hears customers asking where things come from and how clothes are made. “Brands are finally talking about this, too. I just hope I live to see the changes.”

Watch the trailer for RiverBlue below: