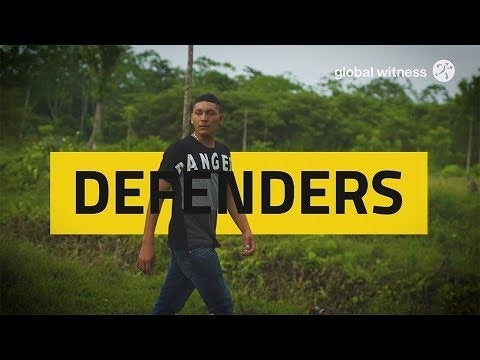 Taking a stand for environmental justice and protecting natural resources is a dangerous pursuit. A new report from the UK-based NGO Global Witness showed that 164 environmentalists worldwide were killed for their activism in 2018. That averages to just over three murders per week. And that’s an underestimation.

Global Witness said the true number was likely “much higher, because cases are often not documented and rarely investigated. Reliable evidence is hard to find or verify,” according to US News and World Report.

Also, murder is not the only way to quash dissent. Global Witness said, although killings are at a disturbing level, companies and governments were increasingly using other tactics like criminalization, non-lethal violence, harassment and threats, as the Guardian reported. One common tactic is for governments to label activists as terrorists.

“Deaths were down last year, but violence and widespread criminalization of people defending their land and our environment were still rife around the world,” said Alice Harrison, a senior campaigner at Global Witness, as the HuffPost reported.

“The drop in killings masks another gruesome reality, ” said Harrison. “Our partners in Brazil and many other countries have noted a spike in other forms of non-lethal attacks against defenders — often attacks so brutal they’re just shy of murder.”

The bulk of the murders took place in Asia or Central and South America. In fact, more than half were in Latin America and most of the victims were indigenous or rural campaigners standing up for their communities against mining, hydrocarbon development, damming and agribusiness. The mining sector was responsible for one-fourth of the murders.

The Philippines replaced Brazil as the most murderous country, with 30 victims, followed by Colombia with 24, India with 23 and then Brazil with 20. It’s the first time since the annual list began in 2012 that Brazil did not top the list, according to the Guardian. The number of reported murders there dropped from 57 the year before to 20 in 2018. 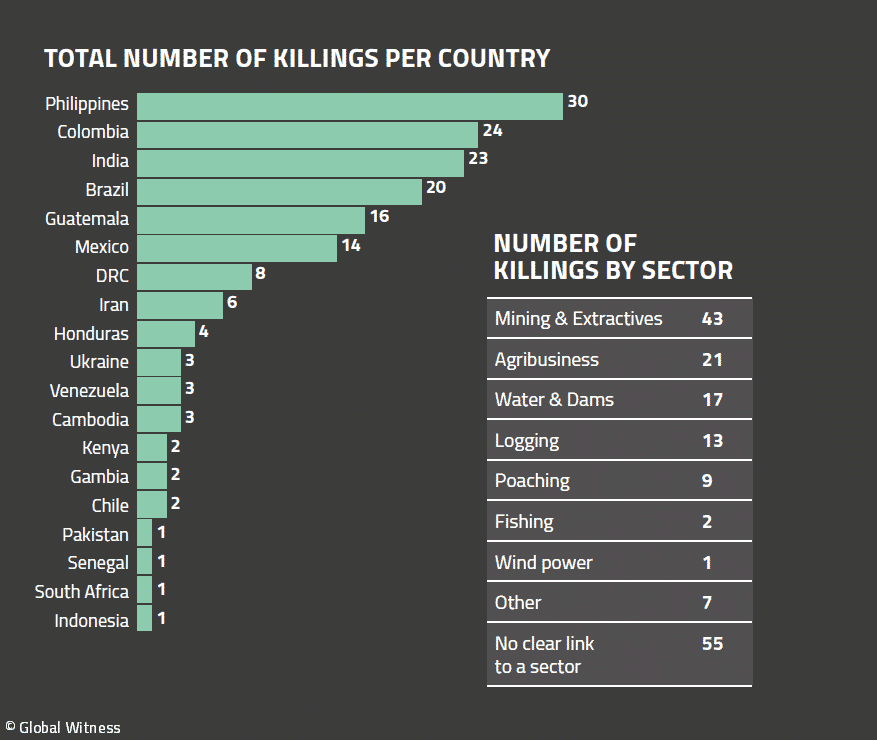 Brazil’s drop from the top spot is largely due to improved reporting mechanisms for indigenous people, a growing body of media stories highlighting the peril of protecting the Amazon, and a UN conference in Rio de Janeiro that called for international recognition of the human right to a healthy environment.

That decline in murders may be short-lived since right-wing president Jair Bolsonaro has made a concerted effort to weaken indigenous territorial rights and protections for nature reserves. In a troubling sign of what may lie ahead, Emyra Waiãpi, an indigenous leader, was murdered in an indigenous reserve ahead of an invasion by dozens of illegal miners, as the Guardian reported.

Guatemala had one of the highest numbers per capita and the sharpest increase with a five-fold increase, bringing the total number to 16 deaths in 2018, which Global Witness attributed to new investments in plantations, mining and energy projects, according to US News and World Report.

“In general, the surge in killings is because Guatemala is witnessing a major setback with regard to democracy and human rights,” said Jorge Santos, executive director of the non-profit Unit for the Protection of Human Rights Defenders in Guatemala, to Al Jazeera.

His group has documented machete attacks and armed militias opening fire on indigenous people campaigning for land rights in areas that are home to mining operations, oil palm plantations and displacement of the Maya Q’eqchi’ community.

Santos said that corruption and impunity have thrived under current president, Jimmy Morales, who has allowed a boom for industries that plunder natural resources, according to Al Jazeera.

“So far,” the report from Global Witness reads, “governments have largely failed to listen or react, while big businesses are generally holding to the model that created the problem in the first place.”

“Growing awareness of environmental issues must now be translated into concrete actions to protect the planet and the people who defend it,” Harrison said to the HuffPost.