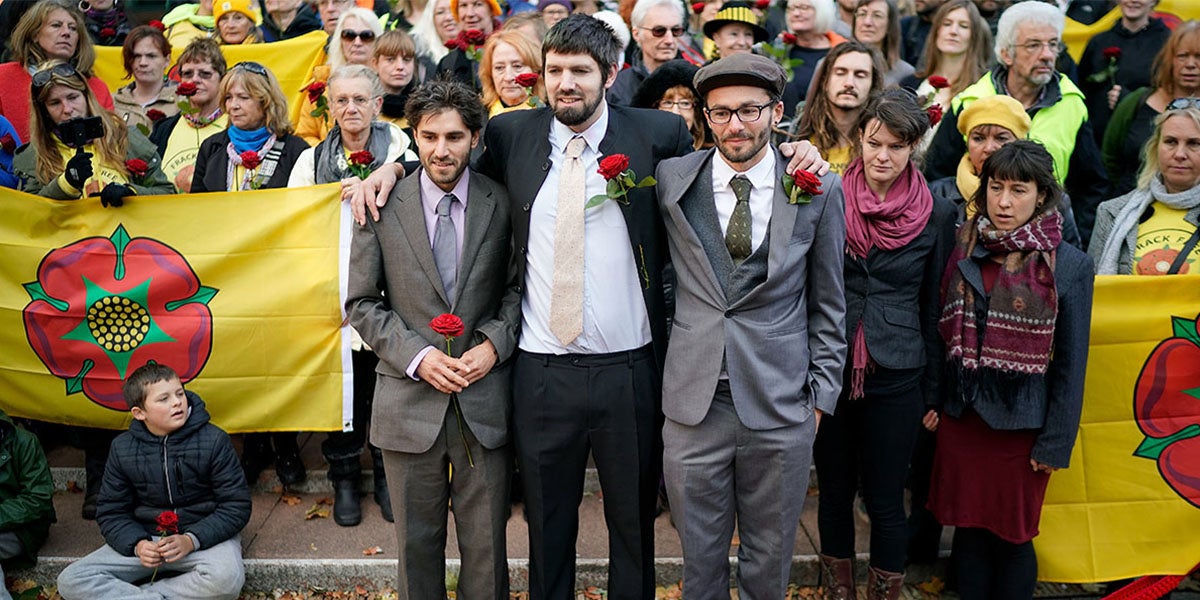 Environmental activists were sentenced to prison Wednesday for their anti-fracking demonstrations in northwest England.

Roscoe Blevins, 26, and Richard Roberts, 36, were given 16 months in prison. Richard Loizou, 31, was given 15 months. The three were found guilty of public nuisance offense by a jury in August, The Guardian reported. A fourth protester, Julian Brock, 47, received a 12-month suspended custodial sentence. He pleaded guilty for the same offense at a separate hearing.

In July 2017, the four men—also known as the Frack Free Four—climbed on top of trucks carrying drilling equipment in order to block the convoy from entering a fracking site in Lancashire operated by UK shale gas firm Cuadrilla Resources. The men camped on the vehicles for roughly 100 hours between and had supporters aiding them with food, water and blankets.

Judge Robert Latham of Preston Crown Court ruled that the protests “caused costs and disruption” to Cuadrilla “but their other victims were the many members of public who were nothing to do with Cuadrilla,” according to the BBC.

While the judge noted that environmental matters are to be taken seriously, he believes that the men “provide a risk of re-offending.”

“Each of them remains motivated by unswerving confidence that they are right. Even at their trial they felt justified by their actions,” he said. “Given the disruption caused in this case, only immediate custody can achieve sufficient punishment.”

The men are likely the first environmental activists in 86 years to receive jail sentences, the Guardian reported. Back in 1932, five men were jailed for their part in the mass trespass of Kinder Scout in Derbyshire over their “right to roam” on private land.

“This won’t break us, we will come out stronger,” Blevins said in a statement to Climate Home News after his sentencing. “Some may view us as victims, but we refuse to be victimized by this. The real victims will be future generations suffering preventable disasters caused by climate change. Our friends and fellow campaigners outside will continue to fight for a ban on fracking and for a just transition to a renewable and democratically owned energy system.”

The drilling site near Preston New Road is at the center of high profile, anti-fracking protests in England. Lancashire police have arrested more than 300 since Cuadrilla started building a fracking pad at the location in January 2017, according to The Guardian.

Fracking is a contentious topic in the UK. Even though it’s banned or on hold in Scotland, Wales and Northern Ireland, England’s Conservative-led government has advocated for exploration and drilling licenses, as EcoWatch previously mentioned. Controversially, Cuadrilla was allowed to initiate drilling after the UK government overruled Lancashire County Council’s rejection of two applications from the company to frack in Lancashire.

“It’s a strange society that massively rewards those responsible for causing more climate change while putting those trying to stop it in jail,” Greenpeace UK executive director John Sauven said Wednesday in an online statement after the sentencing. “Ministers have changed laws, taken away homeowners’ rights and distorted the planning process to make way for the shale industry, yet it’s four peaceful protesters that get punished for climbing on a lorry.”

“As the world’s leading scientists are about to issue their latest warning on the existential threat fossil fuels pose to our living world, these Lancashire protesters deserve our gratitude, not a prison term,” Sauven added. “They have done what this government promised to do but is yet to deliver—making sure that we can leave our children and grandchildren a healthier environment than the one we found.”

No fracking has taken place in the UK in seven years after fracking by Cuadrilla near Blackpool caused earthquakes in 2011, Reuters reported.