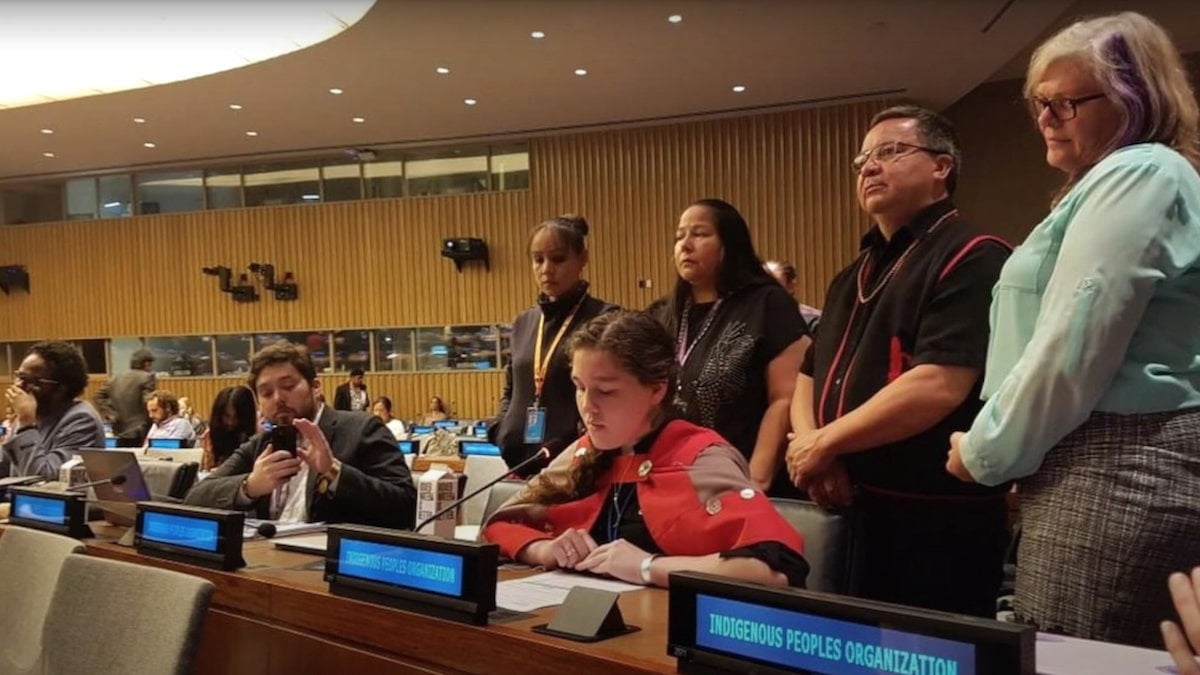 A member of the Tsitts Gitanee clan of the Haida Nation on Haida Gwaii, Haana Edenshaw, 16, is one of 15 Canadian youth suing the Canadian government for its contributions to climate change. Brower Youth Awards / YouTube

More than 700 climate lawsuits have been filed around the world since 2015, according to the Climate Change Litigation Databases. That’s a huge increase, considering there have only been about 1,700 of these types of cases since the late 1980s, most of them in the U.S.

In a recent long-running case, the Dutch Supreme Court — citing the European Convention on Human Rights — ruled in favor of environmental group the Urgenda Foundation and 900 citizens and ordered the Dutch government to reduce its greenhouse emissions by at least 25% by the end of 2020. A few months later, the government announced €3 billion (.5 billion) in measures to drastically cut coal use and fund renewable energy projects.

Urgenda director Marjan Minnesma called it “an enormous win,” telling The Guardian that the move would show “it is possible to use the law as a strategic instrument for change.”

Here’s an overview of this tactic, and others, that environmentalists are using to force climate action.

UN human rights chief Michelle Bachelet believes the Urgenda case will set a precedent. “This landmark ruling provides a clear path forward for concerned individuals in Europe — and around the world — to undertake climate litigation in order to protect human rights,” she said after the decision. The International Bar Association even released a model statute for such cases challenging government failure to act on climate change in early 2020.

Citizen groups have filed similar human rights cases in several EU countries over the past five years, including in France, Belgium and Ireland — the latter decided in the activists’ favor in July 2020.

In February 2020, a group of nine young Germans led by Fridays for Future activist Luisa Neubauer filed a human rights challenge to Germany’s Federal Climate Protection Act (KSG). They’re arguing that these targets — which aim to reduce emissions by 55% over the next decade — don’t go far enough.

And in September 2020, six young Portuguese activists between the ages of 8 and 21 launched an unprecedented climate case at the European Court of Human Rights against the 27 EU member states, the United Kingdom, Switzerland, Norway, Russia, Turkey and Ukraine. Backed by the Global Legal Action Network, their aim is to force the nations to respect the 2015 Paris climate agreement and cut their emissions at home and abroad, where their multinational companies operate.

With many of the cases still ongoing, it’s too soon for activists to know whether their strategy will prove successful in the long run. But they say wins in Ireland and the Netherlands have given them hope.

2. Standing up for Indigenous Rights

Another strategy focuses on the violation of Indigenous rights and racial discrimination, arguing that climate change exacerbates these contentious issues.

In November 2020, a group of political parties backed by NGOs filed a complaint against the Brazilian government for alleged failures to curb deforestation in the Amazon rainforest, a major contributor to climate change. They argue that government inaction has “violated the fundamental rights of Indigenous peoples” present and future. The case was in part inspired by a 2018 ruling by Colombia’s highest court, which found that the Colombian rainforest was entitled to “protection, conservation, maintenance and restoration.”

Earlier in 2020, representatives of the Wet’suwet’en Indigenous group in British Columbia filed a legal challenge against the Canadian government for failing to meet its commitments under several climate accords since the late 1980s.

“None of Canada’s international commitments […] even if met, would have or will enable it to make its equitable contribution to reducing global warming to non-catastrophic levels,” they said, arguing that this failure had breached their constitutional and human rights.

Legal challenges by Indigenous groups have met with less success over the years, especially in North America. But as the effects of climate change become more apparent, that could change.

Activists and municipalities, especially in the U.S., are increasingly targeting major oil and gas companies directly, aiming in some cases to use awarded fines to fund climate mitigation plans.

“The city is standing up and saying we will take our own action to protect our people,” he told reporters. A federal judge threw out the lawsuit later that year, though the city has launched an appeal.

Local cases like these have also gone international. In 2015, Peruvian farmer Saul Luciano Lliuya filed a claim against German electricity producer RWE, alleging it had “willingly and knowingly” contributed to climate change and was responsible for increased flooding caused by glacial melt near his mountain home. He has asked the court to order RWE to reimburse him for 0.47% of the costs he is expected to incur for flood protection — RWE’s estimated share in global total emissions from 1751 to 2010.

“Fossil fuel companies, like tobacco companies before them, have allowed governments to pay for the harms caused by their products,” Korey Silverman-Roati, a climate law fellow at the Sabin Center, told Bloomberg in a recent interview. “As climate harms and costs continue to rise, more jurisdictions are likely to attempt to recoup their costs in court, and the pressure on courts to apportion those costs in a just way will only grow.”

Chevron, Exxon Mobil and other fossil fuel companies are tied up in another climate case on the U.S. West Coast, where a fishing industry trade group took them to court in late 2018 for damaging their “productive livelihood and way of life.”

The fishers allege the oil giants have contributed to increased ocean temperatures which have led to prolonged closures of the Dungeness crab fisheries, “the most lucrative and reliable fisheries on the West Coast.”

Also in 2018, a group of families from across the EU, Kenya and Fiji filed a lawsuit against the European Parliament and the Council of the European Union for failing to protect citizens from the impacts of climate change and the threat to their livelihood.

Among the plaintiffs are lavender farmers from France, beekeepers in Portugal, an Italian family who works in the Alpine winter tourism industry and a group of Indigenous Sami youth from Sweden, who fear their reindeer herding culture is at risk. The group claims the EU’s existing climate targets don’t protect fundamental “rights to life, health, occupation and property.”

The goal of court cases like this isn’t always to win — in fact, the plaintiffs in the EU case aren’t seeking compensation. Stefan Küper, press spokesperson for the NGO Germanwatch, told DW that such cases “draw attention to the issue and show other people suffering from the negative impacts of climate change that they are not alone.”

But financial incentives are still a proven path to success, as seen most recently in a landmark case in Australia where a billion pension fund was sued by a fund member for investing in fossil fuels, an increasingly risky venture. The case was settled in early November 2020, with the pension fund pledging to achieve a “net zero carbon footprint for the fund by 2050.”

Analysts expect the case to spur similar litigation around the world. “If investors are legally required to apply a climate risk lens to their portfolios, this could, for example, result in a significant reduction in investments in fossil fuels, many of which are already being viewed as stranded assets in a low-carbon future,” said David Barnden, of the law firm that argued the case.