One Year Into the Trump Administration, Where Do We Stand? 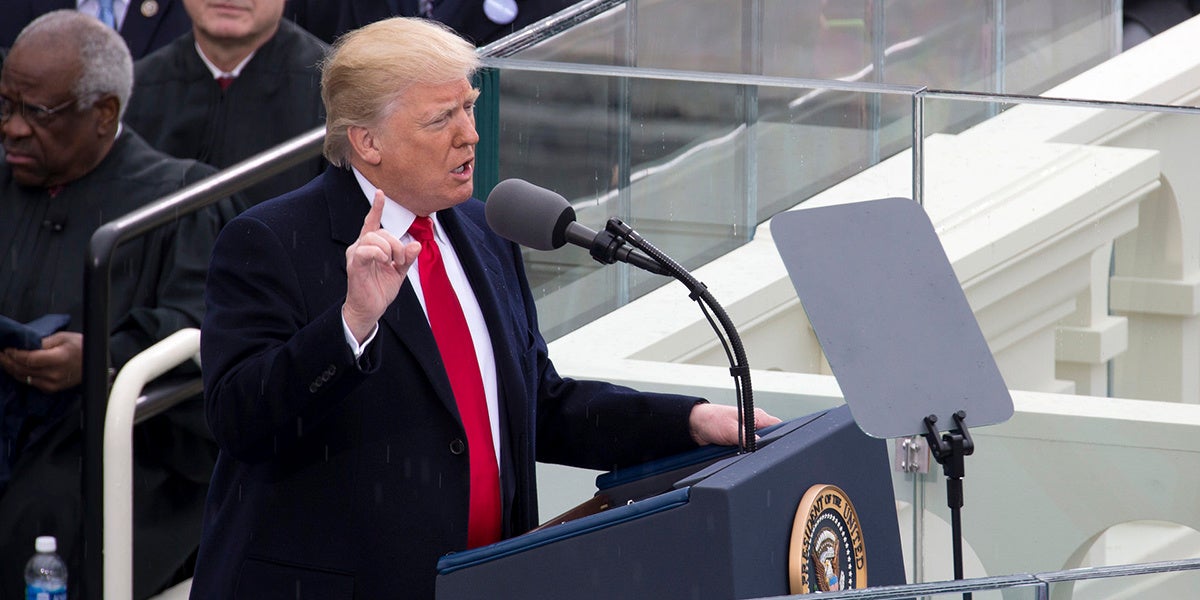 What a long, strange year it’s been.

Saturday, Jan. 20 marks the one-year anniversary of the Trump administration officially taking office after a long and arduous election. It’s a year that has seen seemingly unending attacks on science and the environment, along with a rise in hateful rhetoric and racially motivated policies. But it’s almost been met by the continuing growth of the efforts to resist what the Trump administration has to offer.

So where do we stand, one year in?

Well, for one thing, we can say that the year has given the administration’s actions a visible shape. “These are not isolated incidents at this point,” said Jacob Carter, research scientist for the Center for Science and Democracy at the Union of Concerned Scientists, who has been tracking the administration’s attacks against science—at least 65 since the president took office. “They’re happening so often now that there is definitely a pattern starting to emerge. The administration really wants to undermine the role of science and science-based decision making. They’re getting the expertise out of the way to further a political agenda.”

Carter said these attempts to remove science from government decision-making—ranging from ending a study of the health effects of mountaintop-removal mining to eliminating the words “climate change” from all EPA grants—”have real consequences on peoples’ lives. It’s about our health and safety. If we don’t listen to the best available science, then our lives are at risk.”

But pushing science and scientists aside doesn’t mean they go away forever. “Under this administration we know the scientific evidence isn’t going to be able to speak for itself, so scientists really have to step up and speak for it,” Carter said. And scientists have been doing that in record numbers, starting with last year’s March for Science and continuing on multiple fronts ever since. “They’re stepping up in an unprecedented number and saying science has got to be used in policy-making decisions.” That’s not slowing down; Carter recalls how he attended two big scientific conferences last year and “I had tons of scientists coming up and asking me how they can advocate, what they could do to make sure that science is being used and remains in a proper place.”

That increased level of activism is not unique to scientists, as people from many walks of live have definitely become more politically engaged in the past year. “Trump’s election was a wakeup call in a way,” said Gayle Alberda, an assistant professor of politics at Connecticut’s Fairfield University, who studies elections, political participation and civic engagement. “Nation-wide, we’ve seen this huge influx of people wanting to know not only how to run for office, but how to get politically engaged.”

Of course, people are rising up on both sides of the political aisle. In addition to the citizens opposing Trump’s policies, Alberda said the people who see Trump as representing their ideals have also made their voices louder over the past year. “I think both sides are getting pushed in a way to really engage vastly differently than we have in the past,” she said.

Unfortunately, the two sides aren’t exactly talking to each other, and that’s bad for the country. “We’re losing the ability to engage in civil discourse in a way that’s healthy for democracy,” Alberda said.

Alberda said this has been building for a while, even before the election. “It’s almost like you keep throwing firewood onto the fire and you don’t realize how big it is until it blows up,” she said. “You’re like, ‘whoa, that’s a big fire.’ Lots of little things have happened over the years and we’re kind of seeing that all of a sudden in our face, because you have all of these questions about the state of democracy today.” She said examples such as Trump’s attacks on the free press, the Republican push to pass their legislative agenda, and the ongoing investigation into Russian interference in the last election have only served to stoke this fire even further.

So where do we go as we enter the administration’s second year? One avenue is to look toward groups that have experience fighting these kinds of regressive activities. “One of the strengths of the movement is solidarity,” said Nadia Aziz, program manager of the Stop Hate Project run by the Lawyers’ Committee for Civil Rights Under Law. “There are a lot of organizations like ours that have been around for 50 years or more. We’ve been fighting to secure equal justice for racial and ethnic minorities for a very long time. I think we’re very resilient organizations because of that,” she said.

That resilience is important, she said, because right now we’re at a critical point: “How do you make sure that this movement that we’re all in, this resistance, is creating sustainable action and that we all don’t get burned out?”

One way Aziz said she keeps herself strong is by seeing and experiencing what others are doing. “There are a lot of a lot of groups are doing such wonderful work,” she said. “One of the most inspiring things about my job is being able to connect with people. I think that gives me resiliency, seeing how awesome the people are on the ground what the remarkable work they’re doing.”

That, in fact, may be one of the lasting legacies of this administration: Local community groups and national groups are connecting with each other, learning from each other, and collectively strengthening their voices. “I do think we’re going to keep getting stronger and we’re going to keep building out our movement,” Aziz said.

As we enter year two of this administration, Alberda said she’s looking toward local 2018 elections and the rise of candidates opposing Trump and his policies. “That is going to be really interesting,” she said. “We’ve seen already that Republicans in safe Republican state legislative seats are getting challengers. I think that’s indicative that we’re going to see some interesting elections.”

John R. Platt is the editor of The Revelator. An award-winning environmental journalist, his work has appeared in Scientific American, Audubon, Motherboard, and numerous other magazines and publications. His “Extinction Countdown” column has run continuously since 2004 and has covered news and science related to more than 1,000 endangered species. John lives on the outskirts of Portland, Oregon, where he finds himself surrounded by animals and cartoonists.