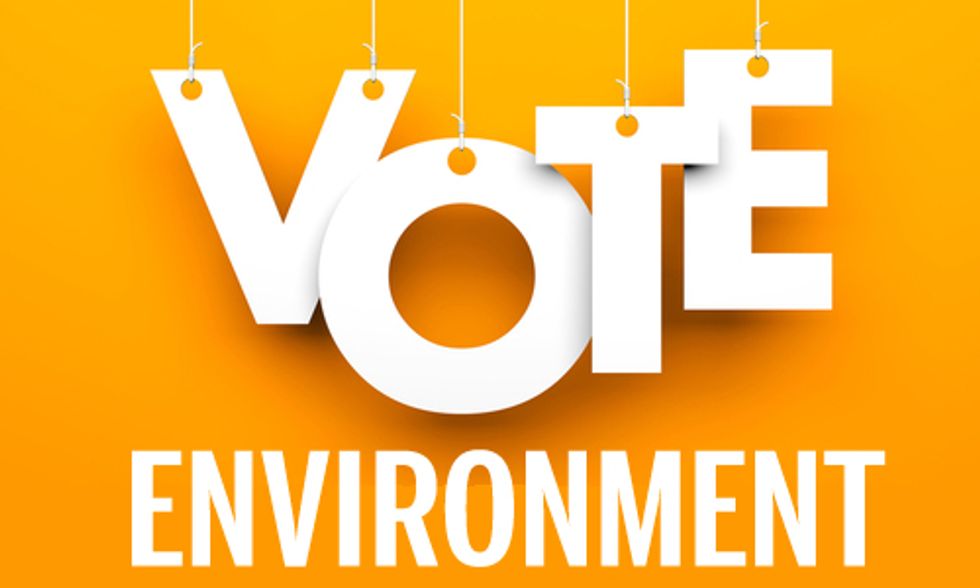 In the past, the environment, energy and climate change have been nearly invisible as issues in political campaigns. They were never mentioned in the 2012 presidential debates. With polls showing that Americans cared most about the economy and jobs and the environment usually coming in toward the bottom as a concern, poll-driven campaigns focused elsewhere.

That's changing. The awareness level of environmental issues has grown on both sides, as President Obama announced new regulations to battle greenhouse gas emissions earlier this year. Ad campaigns from energy companies burnishing their records and small buys by environmental groups have been joined by big money on both sides.

With the Republicans already controlling the House of Representatives and standing a 50/50 shot at taking over the Senate in two weeks, their agenda on the climate could very likely be a battleground in the next few years. With the Senate is likely to be closely divided either way and President Obama in office to veto extreme legislation, they're unlikely to enact most of the radical items on their agenda, such as eliminating the U.S. Environmental Protection Agency (EPA), become reality. But we're also likely to see two years of stalemate with no action on the looming climate crisis.

Texas Senator Ted Cruz is counting his chickens before they're hatched. In an editorial in USA Today, possibly the most radical rightwing Senator said, "A Republican Congress should immediately help Americans get more jobs by embracing America's energy renaissance. This means passing legislation to make it easier to build energy infrastructure, such as the Keystone XL pipeline. But, we need an energy policy that's bigger than Keystone. An effective energy plan would also protect innovative energy technology, such as hydraulic fracturing, from being handcuffed by the federal government. We can also open up land for exploration and ensure that American companies can export liquified natural gas around the world. And, lastly, stop the EPA from implementing rules that will destroy coal jobs and drive up our electricity bills."

With the oil, gas and coal companies eagerly to elect those who would vote for an agenda that sounds like an environmental nightmare, both sides are spending money on advertising revolving around environmental issues, especially energy, according to an article in today's New York Times. It referred to an analysis by Kantar Media, a group that tracks political advertising, which found that it was the third most mentioned issue after jobs and health care in this election cycle, with pro-coal and pro-oil and anti-EPA ads leading the way.

The New York Times says, "The explosion of energy and environmental ads also suggests the prominent role that the issues could play in the 2016 presidential race, especially as megadonors—such as Tom Steyer, a California billionaire and environmental activist on the left, and Charles and David Koch, billionaire brothers on the right—take sides. Leaders of major environmental groups like the Sierra Club and the League of Conservation Voters said they had collectively spent record amounts of money in this election cycle."

Kentucky and West Virginia are among the biggest battlegrounds, where candidates on both sides are vying to present themselves as the strongest supporters of those state's lucrative coal mining sector and their opponent as its biggest enemy. Polls show a neck and neck race between incumbent Republican Senator (and Senate minority leader) Mitch McConnell and Democratic challenger Alison Lundergan Grimes.

The environment is also an issue in Senate races in Michigan between Republican Terri Lynn Land and Democrat Gary Peters for an open seat, in Iowa between Republican Joni Ernst and Democrat Bruce Braley, and in Colorado between incumbent Democrat Mark Udall and Republican challenger Cory Gardner. Steyer's group NextGen Climate is spend in all three races. An indignant Ernst has demanded NextGen's ads be removed, saying they "deliberately mislead" about her position because she also supports some renewable energy measures and calling "San Francisco billionaire" Steyer an "extreme environmentalist."

While Republicans have made the U.S. EPA their target and support of fossil-fuel industries as their rallying point, Steyer's group NextGen Climate has focused on calling out GOP climate deniers (see TV ad below) and climate wafflers in Senate and governor races. Last week it issued its "Stone Age Report" and gave Florida Governor Rick Scott, in a tight race to keep his job against Democrat Charlie Crist, its "Stone Age Award."

Referring to the pushback on climate-related issues by Democrats, League of Conservation Voters president Gene Karpinski told the New York Times, “They’re making it part of the narrative that their opponents are outside the mainstream. To the extent that it’s being used aggressively, that’s definitely new.”