Trump’s Energy Week Looks Like His Health Care Bill: A Disaster for America 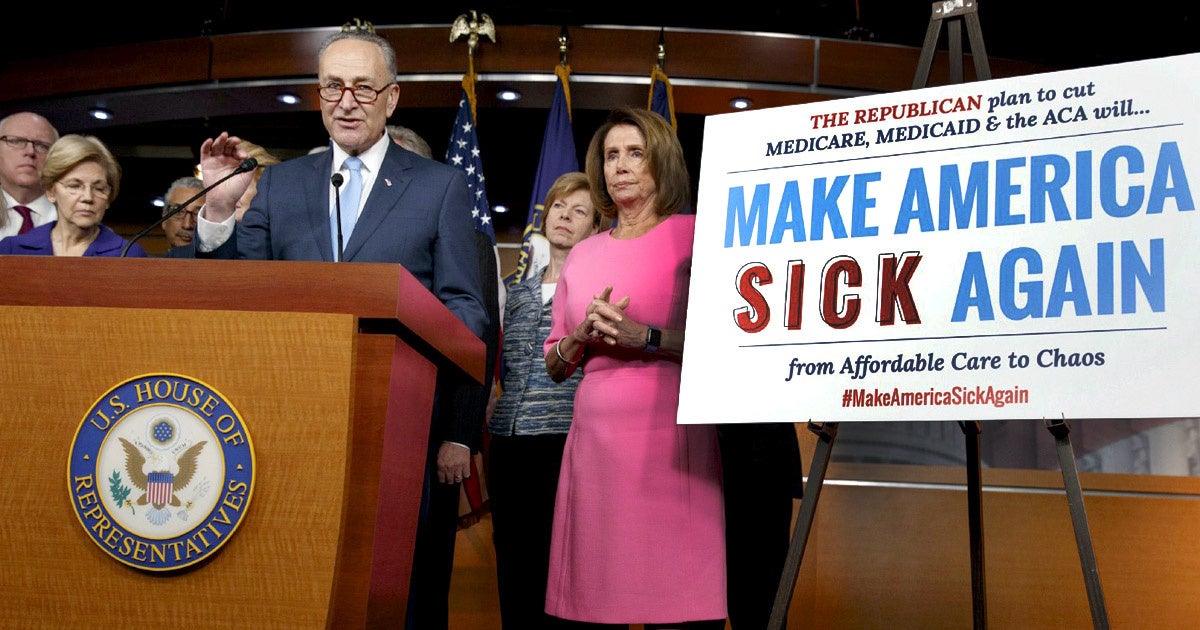 It’s an unfortunate coincidence that this week is the Trump administration’s so-called “energy week” and at the same time, a disastrous health care bill is being pushed by Trump’s allies in the Senate. These initiatives have a lot in common. Both would redistribute wealth up from ordinary Americans to the wealthiest. Both would make people sick. Both would cost lives.

As with the recent “infrastructure week” that came and went without much action on infrastructure, it’s still not clear even a day in what, if any, real substance “energy week” will include. Its purpose, however, is clear: redirect media and public attention away from the ongoing scandals that have plagued the administration since last year’s election and an increasingly unpopular health care bill.

Do not be distracted. The Trump administration’s health care policy, combined with the energy policies they will speak about this week, would wreak havoc on the lives of Americans for years to come.

We don’t work on health care on a day-to-day basis at Oil Change International, but having tracked the oil and gas industry for over a decade, we know a disaster when we see one. That’s why we joined 16 major environmental organizations on a letter to Senators expressing our outrage at the cruelty demonstrated in the bill now being considered by lawmakers. The legislation would make it harder for low-income people to afford health insurance and access frontline service providers—the same Americans that shoulder the heaviest burden from industrial pollution, environmental disasters and the effects of climate change. We know that there can be no climate justice without social justice. And this health care bill is not a just policy.

In what amounts to a staggering transfer of wealth, the GOP health care bill slashes public services and forces ordinary Americans to absorb the costs in higher premiums or going without health care, to make room for tax cuts for the nation’s richest households. The Congressional Budget Office calculates it would cut $772 billion in funding over the next ten years to Medicaid, a critical program that makes health care affordable to tens of millions who couldn’t otherwise afford it. These cuts could force rural hospitals and clinics to shut their doors, leaving families living in poverty outside of population centers even farther from preventative and emergency services.

In what’s being characterized as a massive transfer of wealth, the Republican bill will increase premiums for nearly everyone while cutting taxes for the rich. All told, the Congressional Budget Office estimates that 22 million Americans will lose their health care coverage if the legislation becomes law. That’s more people than those living in New York City, Los Angeles, Chicago, Houston, Philadelphia, Phoenix and San Antonio combined.

Adding insult to injury, the Trump team will spend this week pushing energy policies that will only result in more pollution and further risks to the health and safety of millions of Americans across the country.

Trump seems obsessed with propping up energy whose time has come and gone, and using taxpayer dollars to do it. He’s trying to use public funds to resurrect a coal industry that’s been on the way out for years. Coal has major health impacts along its entire lifecycle. At its peak, coal mining was perhaps the deadliest industry in the U.S., and communities surrounding coal mines suffer from health impacts of coal dust, poisoned drinking water, and other ailments.

And that’s all before it’s burned. Coal power plants are associated with respiratory, cardiovascular and nervous system diseases, and of course health-related impacts of climate change. (See this report from Physicians for Social Responsibility for more of coal’s litany of health impacts.) And as the NAACP has revealed, the average income of the six million people living near coal-fired power plants is thousands of dollars below the national average, and a disproportionate number of people in these frontline communities are people of color.

Meanwhile, Trump is relaxing regulations on the oil and gas industry. He’s taking an axe to refinery regulations that are critical to protecting fenceline communities. He’s pushing dangerous pipelines that will inevitably spill and contaminate drinking water. And in all of this, the Trump administration is pushing increased fossil fuel production that will exacerbate climate change across the board, leading to increased heat-related illnesses, dangerous storms and other health and safety impacts that will impact millions of Americans who, if the current health care bill passes, may no longer have the insurance they need to pay their bills.

With both health care and energy, the Trump administration is seeking to reward the wealthy and imperil the poor. In the case of health care, the current legislation would provide massive tax breaks to the richest in the country. In the case of energy, Trump’s team seeks to continue massive subsidies to the fossil fuel industry, including the increased leasing of public lands to the industry for pennies on the dollar. Meanwhile, low income communities and communities of color are being impacted first and hardest by climate change and the fossil fuel industry.

In conjunction with “energy week,” Trump has started pushing the phrase “energy dominance” to describe his goals for energy policy in the U.S. In many ways, it’s yet another example of Trump’s narcissistic outlook on the world. But in other ways, it’s a fitting description. If his desired energy and health care policies move forward, we can expect increased climate impacts to dominate the news, health care costs to dominate people’s lives, and pollution to dominate our land and sky.