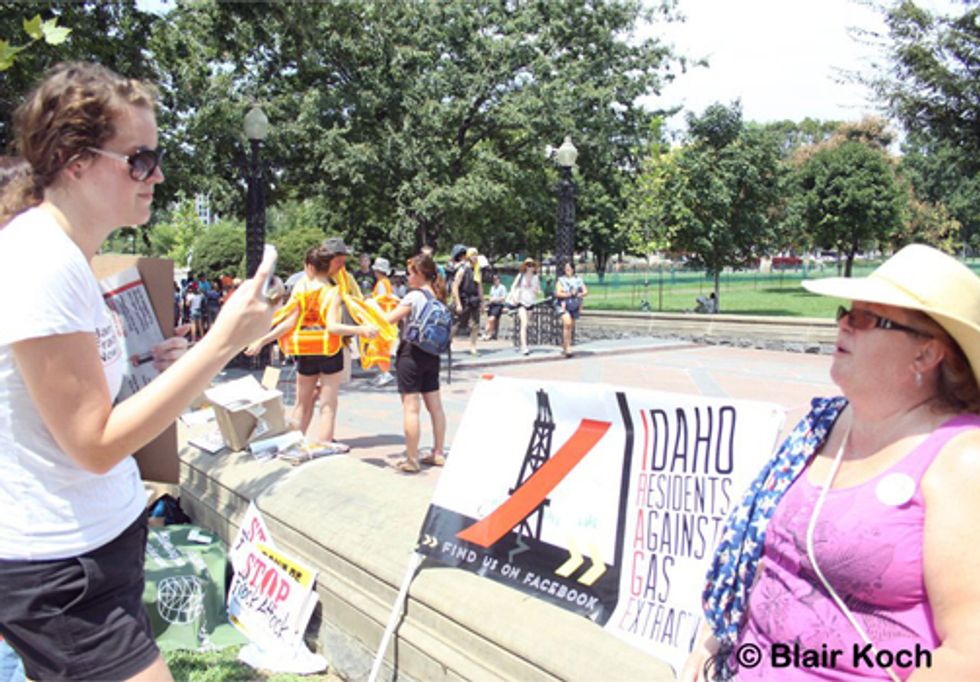 Energy in Depth staff geologist Dana Bohan (left) claimed to be a reporter while talking to Tina Fisher, of New Plymouth, Idaho, at the Stop the Frack Attack rally in Washingto, DC in July.

Even prior to its Jan. 4 nationwide release, the drilling industry was planning its attack on the script, written by Matt Damon and co-star John Krasinski and based on a story by Dave Eggers.

In an interview earlier this year journalist and filmmaker Phelim McAleer tried to cast doubt on the edgy plot twist where Krasinski's character, Dustin Noble, an eco-activist, turns out to be working under cover for the very same company which employees Steve, the landman played by Damon.

On July 28, Tina Fisher, of New Plymouth, Idaho, was approached by a woman claiming to be learning more about natural gas development and why people had traveled near and far to attend the day's Stop the Frack Attack rally on the Capitol's West Lawn.

With her long brunette curls pulled into a casual pony tail and a "Ban Fracking Now" sticker affixed to her t-shirt, she looked like many on the sprawling green. In one hand she held anti-fracking and Stop the Frack Attack rally memorabilia and in the other hand, a camcorder.

Fisher spoke on the record with the reporter. At the time, legislators had passed sweeping new laws setting the stage for oil and gas development in Idaho. Today, Fisher can see what is one of Idaho's first gas wells flaring less than a mile from her home.

She feels the same about being misled about who was interviewing her back in July. Instead of talking with an independent blogger, Fisher was recorded by Energy in Depth staff geologist Dana Bohan.

Energy in Depth is the pro-oil-and-gas front group, that in early 2011 DeSmogBlog reported had been created with the financial backing of several major industry players to respond to what it saw as attacks.

"If they work for the industry, they should say who they are," Fisher said.

I traveled with Fisher and fellow Idahoan Alma Hasse to Stop the Frack Attack rally and chatted with Bohan after their interaction. I told Bohan I looked forward to seeing her blog when I got back to Idaho and would follow up via the email address she had provided.

When she didn't respond I grew suspicious. After a little bit of research online, I quickly tracked her down to Energy in Depth's main Washington D.C. office and picked up the phone.

Bohan didn't identify the organization she was with because she, "wanted to talk with people without polarizing the situation."

"I was just out and gathering information and interested to see what people were talking about. You know that's part of our job, seeing, to know what people are saying on both sides of the aisle and what's going on ... I just wanted to gather general intel and have an open dialogue with people and I think that's what we achieved," Bohan said.

Bohan is no Dustin Noble but her actions were "under cover" just the same.