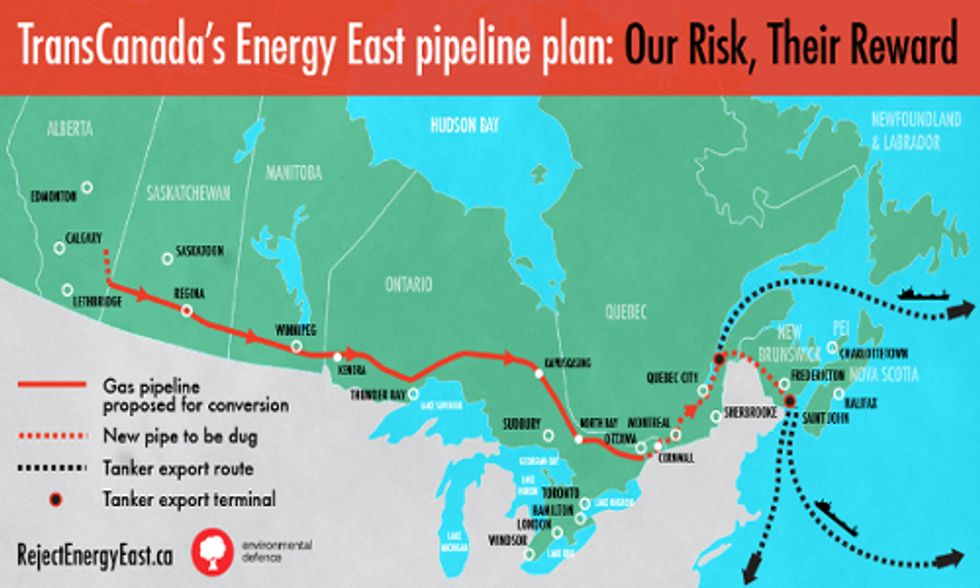 Thwarted so far in its attempts to build the Keystone XL pipeline to carry its Alberta tar sands bitumen oil south across the U.S. to the Gulf of Mexico, the TransCanada Corporation has announced that it will submit an application "within weeks" to construct its proposed, even more massive, pipeline east across the Canada continent, according to the Vancouver Observer.

The Energy East pipeline would carry tar sands oil across most of the Canadian continent and be the largest pipeline in North America. Image credit: Environmental Defence

The $12 billion Energy East pipeline would be almost 3,000 miles long compared to the slightly more than 2,000-mile Keystone XL pipeline. It would cross six provinces and skirts hundreds of communities and several major metropolitan areas including Ottawa, Quebec and Winnipeg on its way to refineries and export terminals in Quebec and New Brunswick. That would expedite the export of the tar sands oil to Europe where just this week, the European Union (EU) lifted its designation of  the oil as "dirty" opening the door for more imported Canadian oil.

"Fierce opposition from environmentalists, Aboriginals, citizens and farmers have effectively stymied the Northern Gateway and Keystone XL projects," said the Vancouver Observer. "Now, Eastern Canada will soon get a taste of these oil sands dramas."

In fact it already is. Last weekend, thousands of people marched in Cacouna, Quebec, in opposition to the pipeline, reported nonprofit community social action group the Council of Canadians. Specifically, they were protesting TransCanada's plans to build a pipeline terminal of the eastern shore of the St. Lawrence River to load supertankers with tar sands oil. It would be located in a habitat essential to the endangered beluga whale. A few weeks ago, a coalition of environmental groups won a temporary injunction to stop TransCanada from doing exploratory drilling for that terminal within the beluga habitat. But that drilling will be resuming shortly.

Although TransCanadian downplays the dangers, saying it is merely converting an old natural gas pipeline to carry tar sands bitumen, the Council of Canadians says that in itself is worrisome, with aging pipeline crossing almost 1,000 Canadian waterways.

"The pipeline would ship diluted bitumen produced in the tar sands across some of Ontario’s most important waterways," said the group. "Diluted bitumen is unlike conventional oil. The Enbridge pipeline spill in Kalamazoo, Michigan showed that diluted bitumen sinks when spilled in water, causing devastating environmental impacts that are nearly impossible to clean up. The National Energy Board has also just rubber-stamped their approval of Line 9 across southern Ontario and Quebec despite a pipeline safety expert’s testimony that there is a 90 percent chance of a catastrophic failure within a few years of the project operating."

"This mammoth pipeline would put over 125 communities, including 52 First Nations and Métis communities, at direct risk of an oil spill," said Canadian environmental group Environmental Defence. "And it would put the water and properties of millions of Canadians at risk."

The idea for the Energy East pipeline came about when U.S. environmental organizations, farmers, tribal groups and others caused President Obama to hold up approval of KXL. According to a Bloomberg article last week titled "Keystone Be Darned: Canada Finds Oil Route Around Obama," "This Canada-only idea surfaced in the days after Obama’s surprise Nov. 10, 2011, phone call informing Prime Minister Harper that Keystone was on hold."