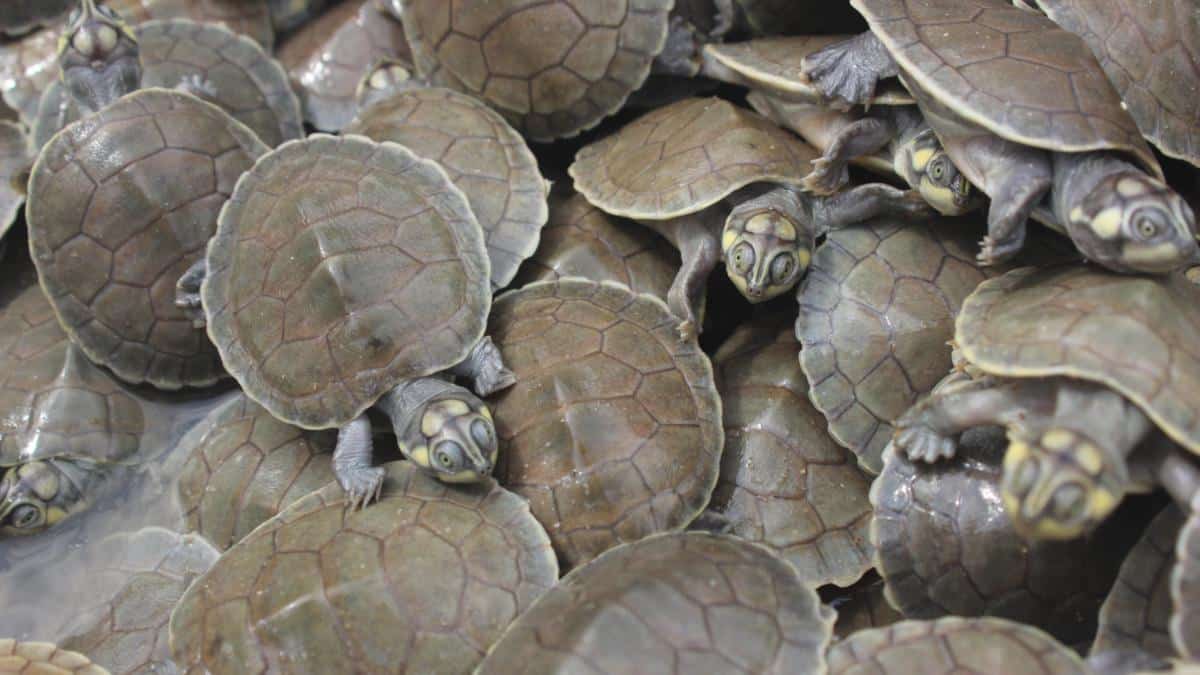 Sound impossible? What the videographers are calling a “tsunami” is actually comprised of an endangered species of turtle that hatches en masse as a survival strategy.

“For the giant South America river turtle, birth is an explosion of life, but also it is most fragile phase,” Camila Ferrara, an aquatic turtle specialist for the World Conservation Society (WCS) in Brazil said in a press release. “In some areas, hatchlings use mass birth to increase their survival. The synchronization of birth allows them to travel together to the river to start a new journey.”

The births were filmed on a sandy beach along the Purus River in Brazil, a tributary of the Amazon River. It is located in the protected Abufari Biological Reserve.

For giant South American river turtles, there really is safety in numbers. The new turtles must travel to the river after hatching in the sand, the video released by WCS explained. By traveling in a pack, they are protected from the many predators that live there.

This is the third mass hatching of the season. You may recall, we reported on 90,000+ hatchings during the previous two events. https://t.co/UqwjiERAdz pic.twitter.com/EpanMEd8FR

The footage was taken as part of WCS Brazil’s ongoing study of the species. Conservationists are monitoring female turtles and their nests before, during and after birth in order to understand the best conditions for mass hatchings and boost turtle conservation.

Mass turtle hatchings are rare, Ferrara told Treehugger, and only occur in a few places in the world. Further, only a few other turtle species use this strategy, including green and olive sea turtles.

While they look tiny in the video footage, giant South American river turtles are actually the largest freshwater turtles in Latin America. They can grow to be up to three-and-a half-feet long and weigh up to 200 pounds, WCS explained. However, not all of the babies in the video will grow to their full size. In fact, less than one percent of the babies survive, Ferrara told Treehugger.

In addition to natural predators, the turtles are threatened by wildlife trafficking for their meat and eggs, according to WCS.