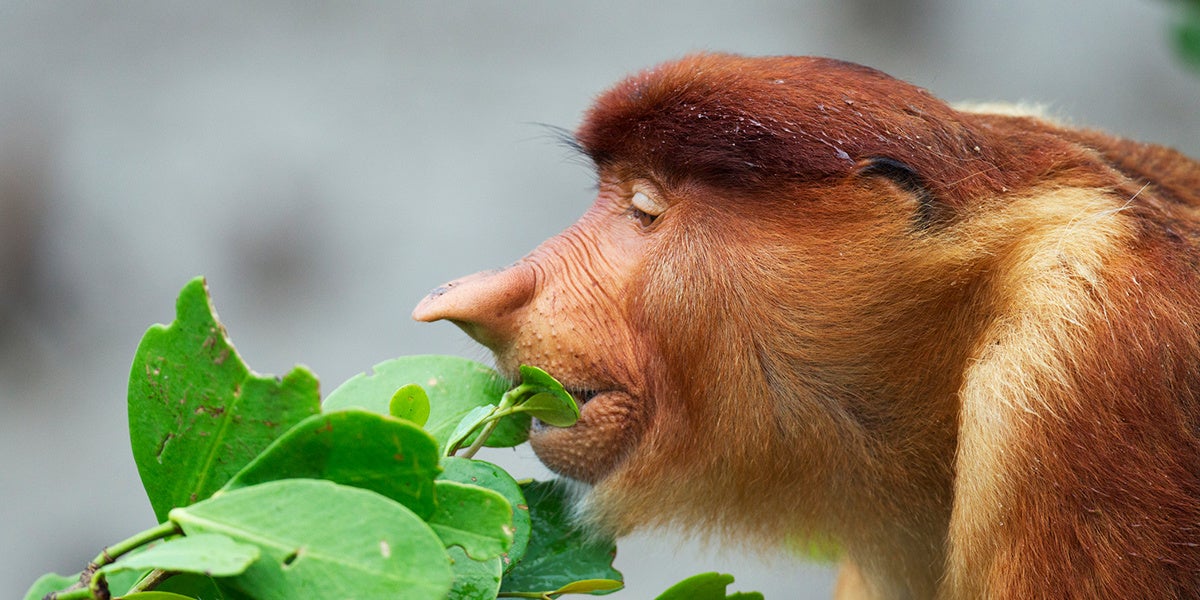 At last count, there were 505 nonhuman primate species living in the wilds of 90 countries across the globe. That might make you think of Earth as the Planet of the Apes (plus monkeys, lemurs, tarsiers and lorises), but according to a large study published last month, those statistics are a little misleading.

In truth, just four nations—Brazil, Madagascar, Indonesia and the Democratic Republic of the Congo (DRC)—harbor 65 percent of all primate species. And nearly two-thirds of the primates living in those hot spots (we’ll call them the Big Four) are facing extinction.

Primates can be loosely defined as mammals with opposable thumbs, but they come in all sizes and dispositions, from timid, one-ounce pygmy mouse lemurs to stately, 550-pound Grauer’s gorillas, to drunk 12-pound vervets. And the places these animals call home are just as diverse. Let’s see how the humans in the four most primate-heavy countries are managing (or failing) to save their cousins.

That more primates—crested capuchins, dwarf marmosets, red-bellied titis, sakis, uakaris, night monkeys and so on—live in Brazil than anywhere else should come as no surprise. The South American country is nearly as large as the U.S., and within its borders lies 60 percent of the Amazon rainforest, which accounts for more than half of all the rainforest left on Earth.

Unfortunately, Brazil allowed agriculture and timber operations to clear 114 million acres of this prime primate habitat between 2001 and 2016—the largest loss of forest over that period among the Big Four. (The next closest, Indonesia, lost half as much.) Even more concerning, Brazil has recently shifted toward more environmentally exploitative government policies and looser conservation laws, which scientists suspect will lead to even more deforestation.

Mining is also threatening Brazil’s primates, and not only because it’s tearing up the land. A 2017 study found that the country has at least 126 dams holding back mining-contaminated water and that these structures are “vulnerable to failure in the forthcoming years.” And when these dams do burst, they befoul every waterway for hundreds of miles downstream with a wave of toxic sludge. (Mining dam collapses are dangerous for non-endangered primates, too. Twenty people died in 2015 when a large mine-tailings dam collapsed on the Doce River.)

But for all of Brazil’s environmental woes, the country is also full of hope. According to Russell Mittermeier, coauthor of the new study and chair of the IUCN Species Survival Commission Primate Specialist Group, Brazil is the most successful among the Big Four at maintaining its primate diversity. He attributes this to the work of the country’s large community of primate conservation professionals.

Take the northern muriquis, the largest monkeys in the New World. Also known as wooly spider monkeys, they can grow to more than four feet tall, and people often hunt them for meat. Further, the large tracts of Atlantic forest they once inhabited have been sliced and diced to the point where only pockets of the monkeys remain.

But in recent decades, organizations like the Muriqui Institute for Biodiversity, the Pro-Muriqui Institute and the National Institute of the Atlantic Forest have formed to give these monkeys a boost. While northern muriquis are still critically endangered, one population has risen from just 22 individuals to at least 354 as of 2015. (For a related Brazilian primate success story, check out my earlier piece on golden lion tamarins.)

Brazil is also capable of halting its deforestation habits and has done so in the past. From 2005 to 2012, the country reduced its rate of forest loss by a whopping 80 percent.

Brazil is the architect of its own destiny, for good or ill, but as of now, Mittermeier thinks it will tip toward the good. “It’s the country where we have the highest likelihood of keeping all known species and subspecies into the next century,” he said.

DRC’s Future Is Very Much TBD

Gorillas, chimpanzees, monkeys and the most adorable of the adorable (though a bit gross), bushbabies, all call the Democratic Republic of the Congo home—as does one of the world’s fastest growing human populations. The mountainous jungles of this large central-African nation are lush, but rampant government corruption and myriad warring factions run just as thick here. Together, these factors make the DRC the most worrisome of the Big Four.

The DRC has some of the planet’s most important great ape conservation areas—places like Virunga National Park, home to the mountain gorillas that Dian Fossey made famous and Kahuzi-Biega National Park, where you’ll find the rare Grauer’s gorilla (as few as 17,000 are thought to remain).

As in the other Big Four nations, logging and agriculture threaten the DRC’s wildlife, but poaching is the biggest problem here. Almost every primate known to inhabit this country has at some point ended up for sale in its bushmeat markets—even the tiny talapoin, which weighs about as much as a teacup Yorkie. At a single market in Kisangani, the country’s third-largest city, one study found more than 8,500 primates over the course of four months—including many critically endangered ones, such as the Dryas monkey and, yes, the Grauer’s gorilla.

It’s likely that several of the products you own are adding to the loss of primates in the DRC. The country produces more than half of the world’s cobalt, which is a key component in the lithium ion batteries that power smartphones, computers and electric cars. In just the past five years, demand for cobalt to fuel these industries has tripled, and experts expect it to double again by 2020.

The cobalt mining industry brings more roads, more deforestation and more workers looking for relatively easy sources of protein into the DRC’s otherwise remote forests. A study from 2017 estimated that 8 to 10 million people make a living each year at these surface mines—and that translates to a lot of primates on the plate.

While corruption and lack of government accountability are rife in the DRC, even here there is hope. A recent census of the mountain gorillas Dian Fossey studied shows that the gorilla’s numbers have actually increased since 2010, making it the only great ape population on Earth proven to be on the upswing.

Madagascar’s on Its Own

The African island of Madagascar has the luxury of sharing precisely zero land borders with another country. This is good news in some ways, as it means the island’s wildlife is protected from violent conflicts and from poachers spilling over from neighboring countries (as happens on the DRC-Rwanda border and the Brazil-Colombia border). But islands come with their own biodiversity risks.

The landmass now known as Madagascar separated from the Seychelles and India between 84 and 95 million years ago and it boasts an array of species found nowhere else on Earth. This includes five families of primates made up of 15 different genera and 111 species and subspecies.

“Madagascar is far and away the highest major primate conservation priority in the world,” said Mittermeier.

But he notes that 90 percent of its natural habitats have already disappeared, thanks to agriculture and logging over the past century. “You have all of this incredible primate diversity found nowhere else in an area about the size of three New Jerseys,” he said. “And New Jersey is not a very big state.”

The Malagasy government has done very little to enforce its own environmental laws. Fortunately, local communities and NGOs are taking matters into their own hands. For instance, the only way tourists can gain access to the Andasibe-Mantadia National Park—home of the indri, one of the world’s largest living lemurs—is by hiring a local guide.

NGOs are also taking the reins to save the critically endangered golden-crowned sifaka. About 6,000 of these cream-colored beauties remain in the northern stretches of the island, where forest fragmentation has greatly reduced their habitat. A local Malagasy NGO known as Fanamby teamed up with Conservation International in 2005 to secure a 49,000-acre protected area for the sifaka. Their numbers continue to decline, but so long as there are protected forests, there is hope.

Indonesia Is a Mixed Bag

Last comes Indonesia, a nation of more than 17,000 islands in the Pacific. Known for its orangutans—some of which have lost more than half of their habitat over the past 16 years to palm oil plantations—Indonesia is also home to googly-eyed tarsiers, lanky gibbons and lovely little langurs.

The country also has the largest population of Muslims on Earth—which is good news for its primates for one simple reason: Primates aren’t considered halal, so Muslims usually won’t eat them.

But while Indonesian primates have dodged the dinner plate, they have not escaped habitat destruction. Widespread clearing of tropical forests for palm oil and timber has put many primates here on the ropes. Without their natural homes, the animals sometimes seek food and shelter near human communities, where they are viewed as garden pests and killed. Weighing up to 220 pounds, orangutans are particularly conspicuous crop raiders, and when found, they’re often shot.

The endangered Javan gibbon, also known as the silvery gibbon, is also running out of room to roam. Logging has pushed these animals out of the lowlands they prefer and into higher elevations, but there’s obviously a limit to how high the gibbons can go and still survive. At most, only about 4,000 silvery gibbons remain, and some scientists estimate that their habitat has been reduced by up to 98 percent in all.

Still, conservationists aren’t giving up on the gibbon yet. They are about to release into the wild a half dozen silvery gibbons that were born in captivity. It’s not a magic bullet, but each primate returned to the wild population helps expand genetic diversity and gives the species a tiny boost toward staving off extinction.

As to where the Indonesian government stands on primate conservation, the timbre of a recent news story is not encouraging. The country is set on a massive hydroelectric dam project and appears to be actively downplaying concerns about the effect its construction could have on Tapanuli orangutans, a species discovered just last fall and already feared to be endangered.

Realizing so many of our cousins face so many existential threats of our own making can be disheartening, but there is one silver lining: No primate has gone extinct in more than 100 years. (There have been some close calls, though. For instance, the Bouvier’s red colobus monkey was thought to be extinct until scientists rediscovered it in 2015.)

“This is the only larger group of mammals for which we did not lose at least one species or subspecies in the 20th century,” said Mittermeier. The question now is, can we make it another 100 years with our family tree intact?