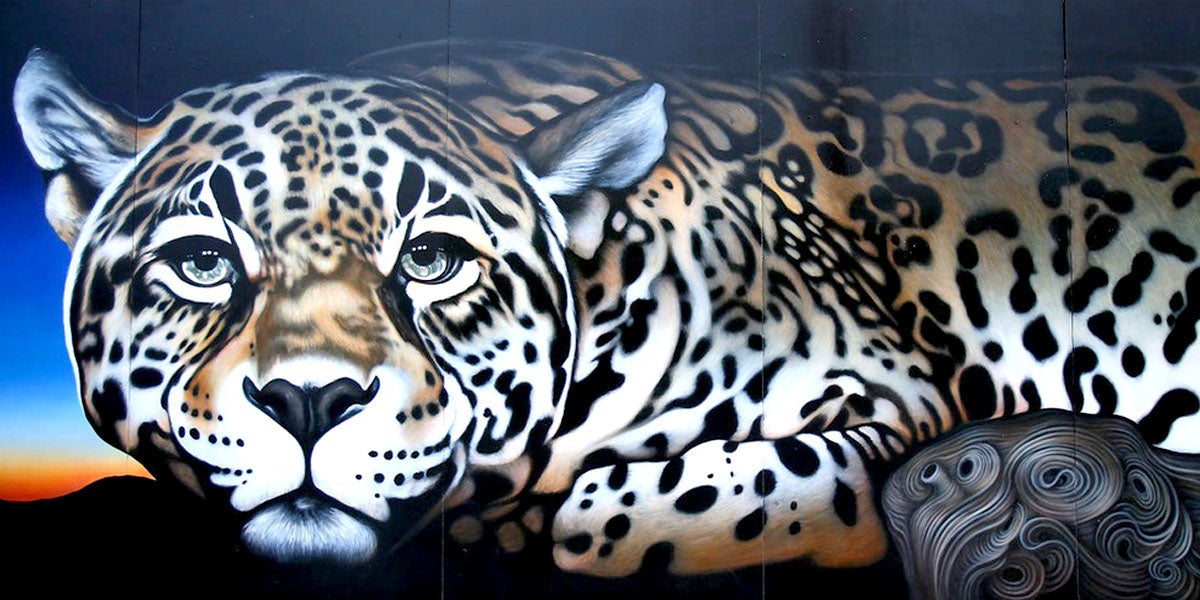 In support of the Standing Rock Sioux tribe’s campaign to protect their water and sacred grounds from the Dakota Access Pipeline, the Center for Biological Diversity and artist Roger Peet installed a mural of an endangered butterfly at the Oceti Sakowin camp, where hundreds of tribes and allies gathered in peaceful protest.

Here are the 10 murals that have been installed so far as part of the Endangered Species Mural Project:

In addition to the threat to people, water and sacred places, the Dakota Access Pipeline could also kill the Dakota skipper, a rare prairie butterfly protected under the Endangered Species Act. The brightly colored butterfly mural is intended as a show of support of the water protectors and to symbolize the harm the project will cause to people and wildlife. It is painted on the side of a structure built by the “Shelter for the Storm” project to provide shelter for indigenous media collectives during the frigid winter.

“It was an honor to paint this mural in the Oceti Sakowin frontline camp and to offer it to the assembled water protectors as something bright and beautiful within the vibrant assembled communities of First Nations peoples,” said Roger Peet, who leads the center’s national endangered species mural project. “The struggle at Standing Rock against the Dakota Access Pipeline is native-led and native-voiced, and the protectors there are facing down police violence in defense of all species, large and small, including even the tiny but tough Dakota skipper.”

Dakota skippers are small butterflies with hooked antennae and thick, muscular bodies that enable a faster, more powerful flight than other butterflies. They have already lost nearly two-thirds of their original range due to loss of native prairie habitat. They are currently found only in the eastern half of North Dakota, northeastern South Dakota and western Minnesota, and are already extirpated in Iowa and Illinois. They were protected as threatened under the Endangered Species Act in 2014.

The U.S. Fish and Wildlife Service acknowledged that the threatened butterflies will be harmed by construction and maintenance of the pipeline, but issued a permit that allows the butterflies to be killed and their habitat to be degraded. The service suggested to the company and the U.S. Army Corps of Engineers that the butterflies be monitored and that voluntary conservation measures be taken to try to minimize the overall harm to the species.

“Respecting the diversity of the Earth’s cultures and people is intrinsically connected to protecting its plants and animals, so the plight of the Dakota skipper butterfly is directly connected to the plight of indigenous cultures that will be irreparably harmed by the pipeline,” said Tierra Curry, a senior biologist at the Center for Biological Diversity. “The government should stop the Dakota Access Pipeline because of the threat it poses to tribal rights, to endangered species and to our collective future.”

The structure on which the mural was painted is one of two designed and built by Oregon’s Shelter for the Storm Project, coordinated by activists Esther Forbyn and Matt Musselwhite. It was framed entirely using solar power and with timber felled and milled by hand from dead trees in communities in southern Oregon. Two indigenous media collectives will use the structures for warmth and power in the coming final stretch of the struggle against the pipeline.

“It’s vital that indigenous voices have a warm and safe space from which to do their work,” said Peet. “Our work to build and decorate these structures is a small way to help amplify the native-led struggle against the bankrupt energy systems that are destroying the world.”