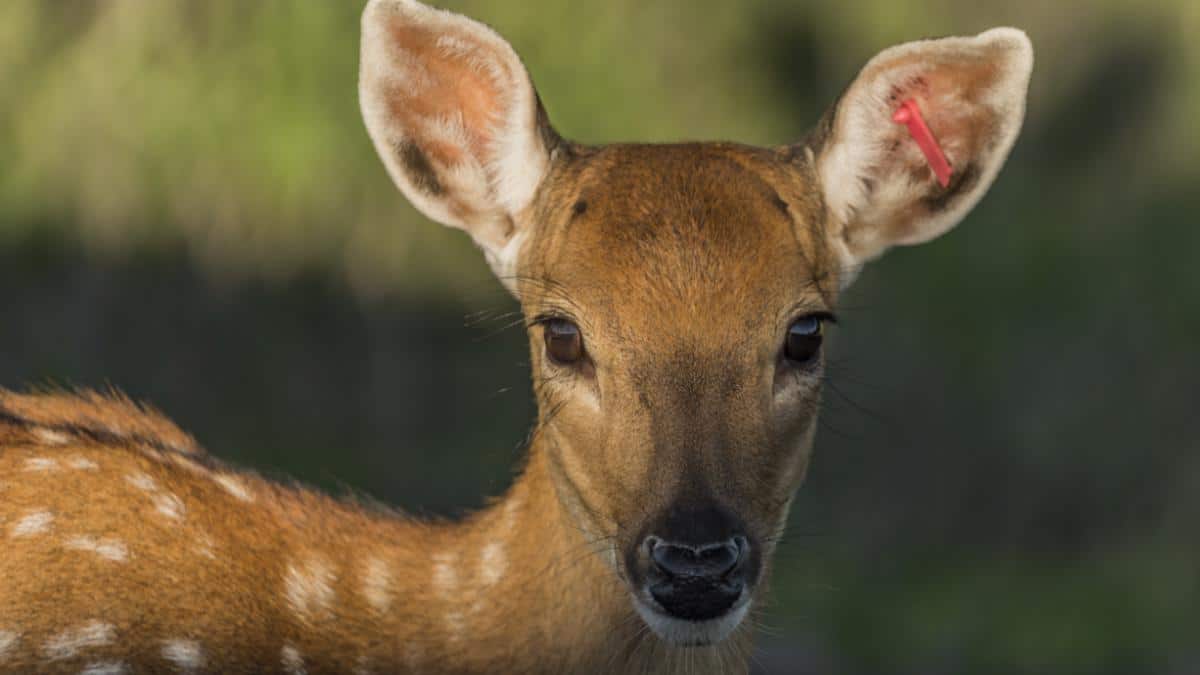 First recognized as a new species in 1993, the large-antlered muntjac is already critically endangered and heading fast toward extinction. As muntjac go, the large-antlered is the largest species, but muntjac in general are small members of the deer family Cervidae. The species is facing a “quiet extinction,” hidden away in a miniscule global range in the Annamite Mountains of Laos and Vietnam.

Large-antlered muntjac are a rich, dark brown overall and stand approximately 2 feet (60 cm) high at the shoulder. In common with many deer, they have a white underside to the tail, which is typically raised when alarmed. Like other muntjac they have simple, two-tined antlers, long pedicels and unique paired frontal glands on the rostrum between their eyes. Males, like other male muntjac, have long, sharp canine teeth they use in fighting. 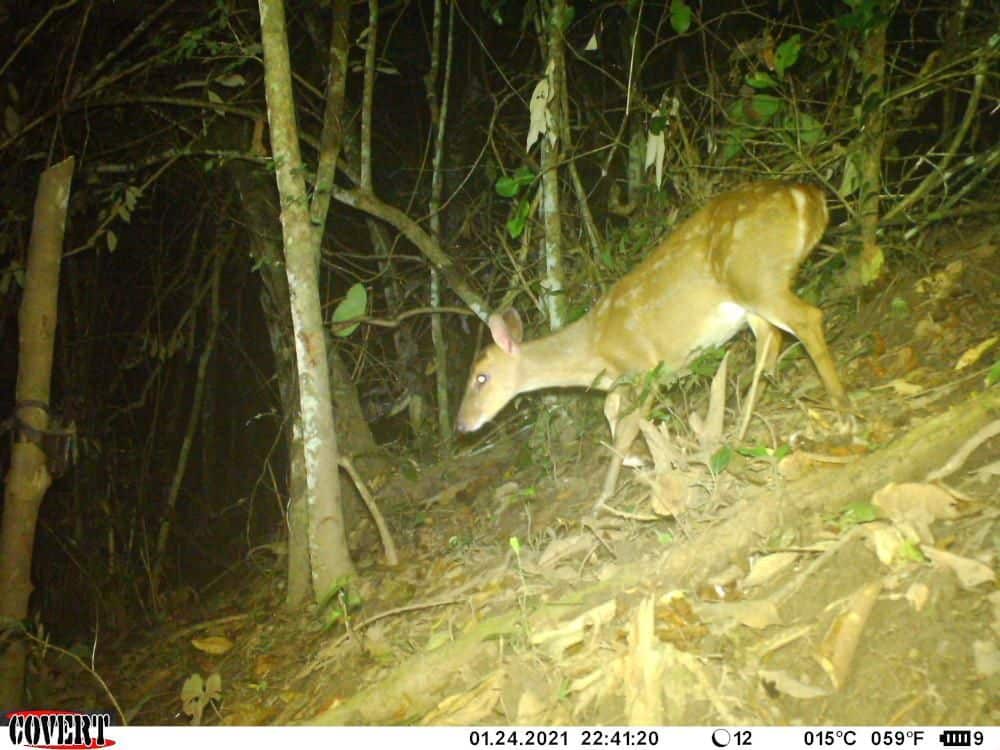 Widespread intensive snaring throughout their small range is the number-one problem. This snaring is driven by a booming wildlife trade that encompasses the derivatives of many species — from well-known products of tigers and pangolins to gelatin derived from primate bones, turtle shells and medicinal plants. The large-antlered muntjac isn’t a particular focus of the trade, but snares are indiscriminate. Trade is booming because of the economic and population growth of East Asian countries. Roads, dams, mines and other infrastructure investments make things worse, and because of sustained economic growth these are on the rise. 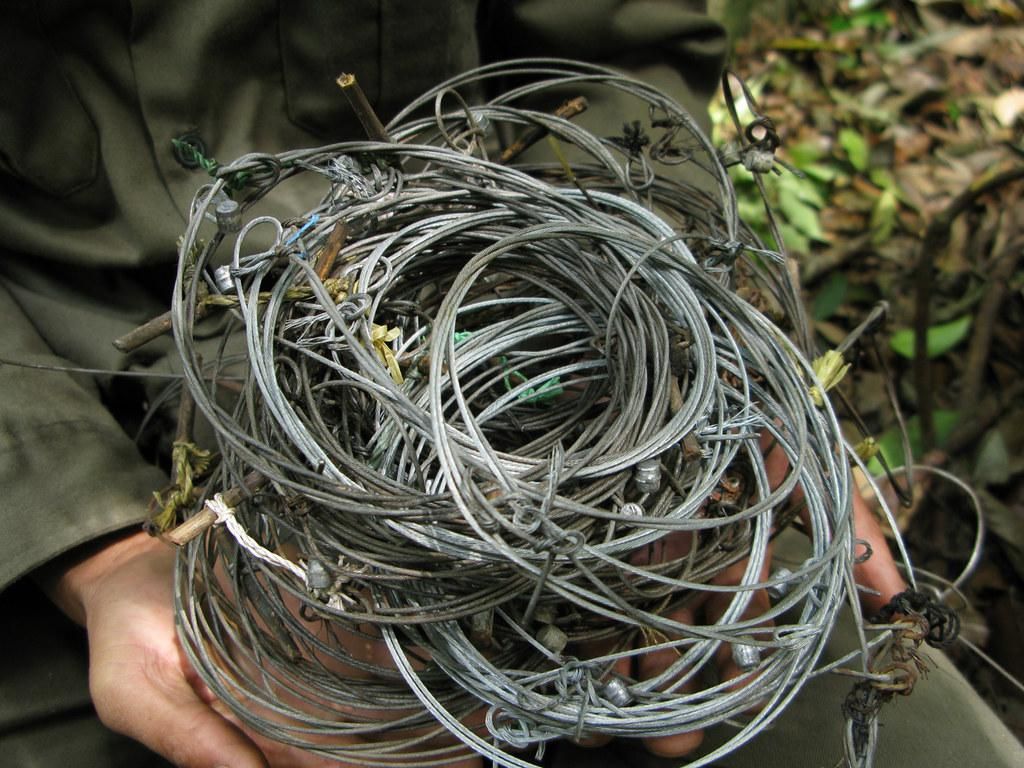 NGOs are trying but have no concrete success yet. Foundation Anoulak and Asian Arks are potentially poised to make a difference, but unfortunately even the species’ legal protection does little to help.

In 2015 I saw my first wild muntjac. I was so enthralled by its cautious yet gracious movements and the delicacy of its existence that I immediately knew I wanted to do all I could to save the species from extinction. Going to the forest in Vietnam had always been sad, knowing of the challenges facing distinctive wildlife from rampant poaching. So seeing an animal, especially a large mammal, is always an exhilarating experience when, for a moment at least, I can forget about life’s problems.

I love observing animal behavior, but seeing it in the wild, from a muntjac, is almost an impossibility. More often I get a sense of joy looking through camera-trap photos thinking about the behavior I might be observing in a series of photos — perhaps a fawn chasing back and forth around its mom. These are the moments that I’m hoping to see more often in my camera-trap photos; hopefully, when their population has recovered, I can see them in real life.

Understanding and linking proportional protection efforts to the scale of the threat (my Ph.D. focus).

What else do we need to understand or do to protect this species?

Following the advice of leading conservationists in Southeast Asia, I’ve been pursuing research to better understand the dynamics of the snaring and the impact it has on the large-antlered muntjac. Currently there’s no data on how parameters such as snare density or spatial distribution affect population viability for any Annamite species. So, questions like “how large an area can a patrol team effectively cover?” simply can’t be answered.

Minh Minh Nguyen is working to conserve the large-antlered muntjac amongst the brilliant diversity of the Annamite region. Minh and her team’s work is supported by the Conservation Leadership Programme (CLP) and the Saola Working Group, and is conducted using permits granted through a collaboration between Nong Lam University and the Chu Yang Sin National Park. Minh is currently a Ph.D. student at Colorado State University, supported by scholarships from the AAUW – International Fellowship, the Wildlife Conservation Network and Colorado State University, where she hopes to gather as much support as she can to change the fate of the species she loves. She’s also passionate about education, particularly empowering new generations of conservationists, and continues to mentor undergraduate students back home in Vietnam. When networking with conservation colleagues, she always tries to find opportunities for people new to conservation to get involved.