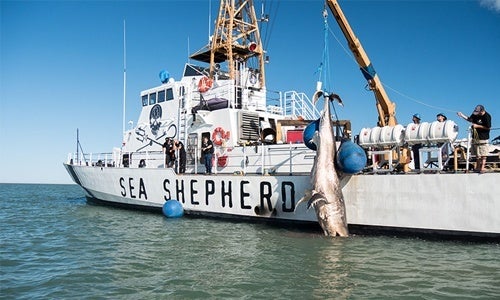 Sea Shepherd Conservation Society has vowed to increase night patrols of the Vaquita Refuge in the Gulf of California after two endangered species were found dead this weekend—a presumed result of illegal fishing activity in the area. 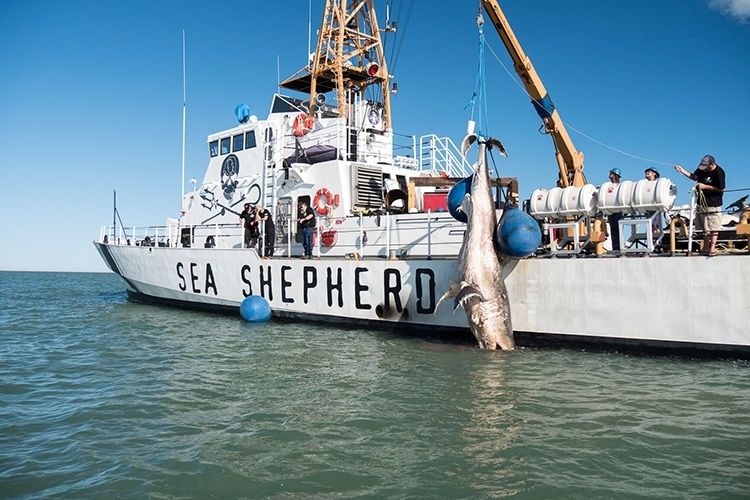 While patrolling the Vaquita Refuge in the Gulf of California March 4, crew onboard Sea Shepherd Conservation Society’s research vessel, the R/V Martin Sheen, found a dead vaquita porpoise floating in the water. Nearby, the crew also found a dead totoaba bass, along with a dead common dolphin. The dolphin had a hook piercing the body below the pectoral fin. In addition to finding the dead vaquita and totoaba, the crew of the M/V Farley Mowat’s small boat, the Wolf, found a dead totoaba just off San Felipe March 5. The totoaba’s belly was cut open and the swim bladder was removed. This swim bladder can fetch an estimated $20,000 on the illegal wildlife black markets in Asia. The vaquita and totoaba are both endangered and protected species. 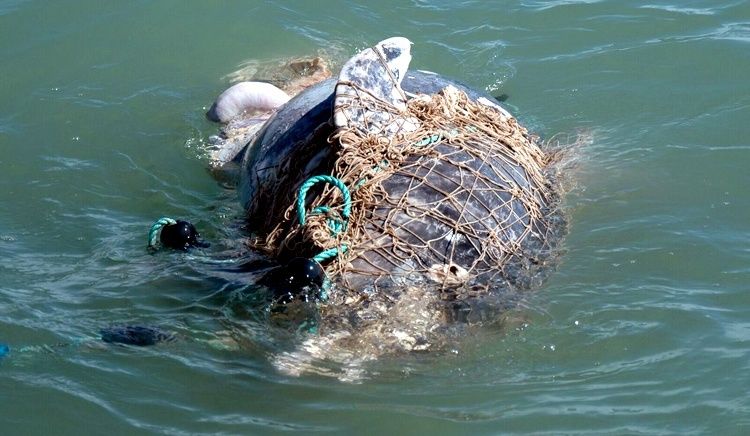 After this devastating discovery, crews then found the body of a vulnerable species: a great white shark on March 6. The shark measured approximately four meters long and was entangled in a totoaba gillnet along with a dead dolphin. The past three days of Operation Milagro demonstrate why all gillnets must be permanently banned. Gillnets are indiscriminate killers, trapping any marine life that comes into contact with them. It is presumed that all of the deaths are a result of illegal fishing activity in the refuge and Sea Shepherd will therefore increase night patrols to protect these endangered species.

In recent weeks, crews of the R/V Martin Sheen and M/V Farley Mowat have been successfully dragging specially constructed hooks to find the illegal fishing gear. Just two weeks ago, the crews were able to free a humpback whale that was entangled in a gillnet. The gillnet was set for totoaba. Totoaba are targeted by poachers for their swim bladders while vaquita are often caught and drown in the gillnets used to catch totoaba, due to their similar size. Scientists studying the vaquita estimate that there are less than 100 individuals left and that the population is declining at 18.5 percent each year.

In April, 2015, Mexican President Enrique Peña Nieto announced a two-year ban on the use of gillnets in a 13,000 square kilometer range of the Gulf of California. Sea Shepherd’s ships the R/V Martin Sheen and M/V Farley Mowat, a former U.S. Coast Guard Cutter, have been patrolling the Vaquita Refuge since November 2015 in an effort to stop poaching of the totoaba and remove any illegal fishing gear to save the vaquita.

“Finding the dead vaquita was heartbreaking and my biggest fear became reality,” commented Operation Milagro campaign leader and M/V Farley Mowat captain, Oona Layolle. “The crew of both Sea Shepherd ships have worked so hard alongside the Mexican Navy and PROFEPA to save the vaquita. With so many poachers operating at night, we will increase our night patrols to protect the vaquita.”

Since Dec. 31, 2015, the Mexican government authorized Sea Shepherd to remove gillnets and other illegal fishing gear in the gillnet ban zone.

Captain Layolle continued, “This may seem like a horrible setback (and it is certainly horrible), but our efforts to save the vaquita will continue, stronger than ever. We are and will keep, doing our best so these beautiful and shy animals will not become extinct on our watch.”

TED Talk: ‘It’s Not Too Late for Our Oceans’