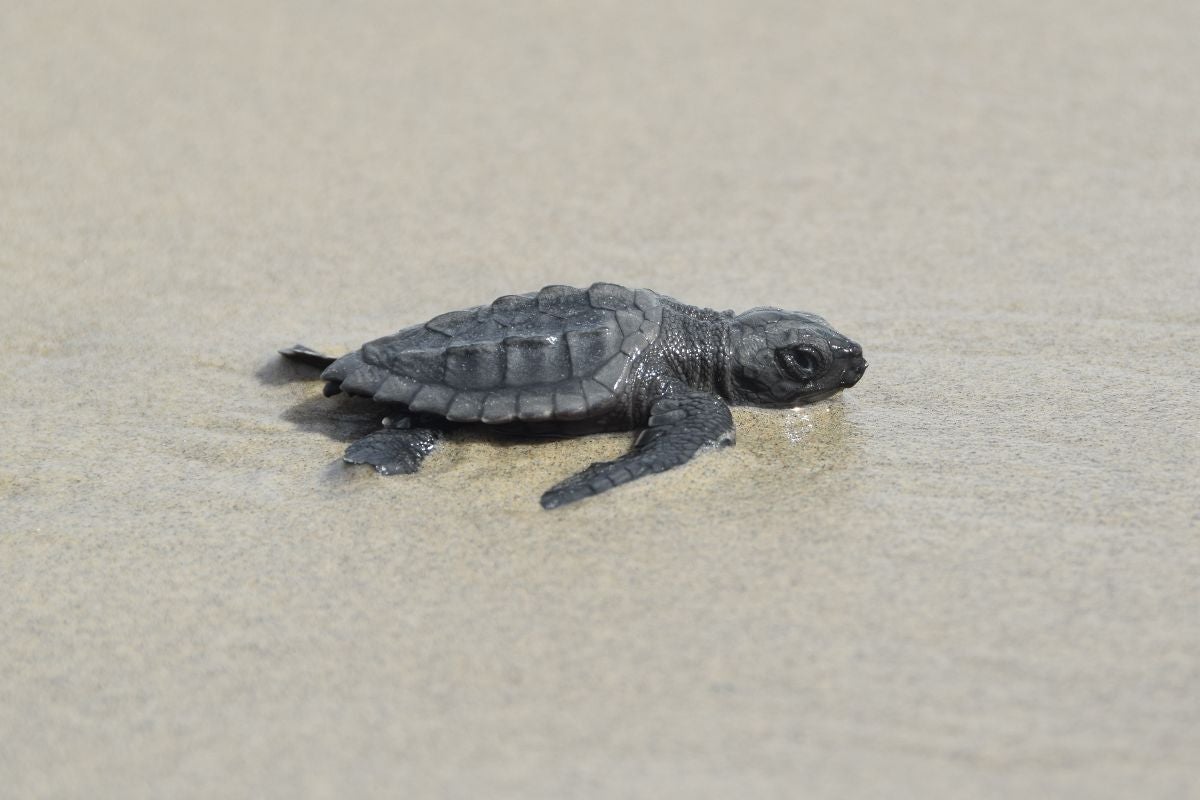 A newly hatched Kemp's ridley sea turtle makes its way out to the Gulf of Mexico from Louisiana's Chandeleur Islands. Coastal Protection and Restoration Authority

Endangered sea turtles have hatched on a chain of barrier islands off Louisiana for the first time in 75 years.

The Louisiana government announced August 17 that the Louisiana Coastal Protection and Restoration Authority (CPRA) and the Louisiana Department of Wildlife and Fisheries (LDWF) found evidence that endangered Kemp’s ridley turtles had hatched in the Breton National Wildlife Refuge of the Chandeleur Islands, which is good news both for the turtles and the islands they were found on.

“Louisiana was largely written off as a nesting spot for sea turtles decades ago, but this determination demonstrates why barrier island restoration is so important,” CRPA Chairman Chip Kline said in the announcement. “As we develop and implement projects statewide, we are always keeping in mind what’s needed to preserve our communities and enhance wildlife habitat. Having this knowledge now allows us to make sure these turtles and other wildlife return to our shores year after year.”

The sighting marks the first time that sea turtle hatchlings were seen on the islands in at least 75 years. Two hatchlings have been spotted moving towards the water, and more than 53 sea turtle crawls have also been observed.

Scientists are especially thrilled to find Kemp’s ridley sea turtles, which are the smallest species of sea turtle in the world, The Guardian reported. They are predominantly found in the Gulf of Mexico, and were once abundant in the area.

“An amateur video from 1947 documented tens of thousands of Kemp’s ridleys nesting near Rancho Nuevo, Mexico on a single day,” the National Oceanic and Atmospheric Administration (NOAA) wrote.

However, by the 1980s, their numbers had plummeted, reaching a low of around 250 nesting females and a record minimum of 702 nests in 1985. Conservation efforts have boosted their numbers since then, and the number of nests increased by around 15 percent each year through 2009. At that point, the increase stalled. The species remains endangered according to the U.S. government, and the primary threat it faces is being caught by mistake by commercial and recreational fishers.

The discovery of the hatchlings is also good news for the Chandeleur Islands, which are recovering both from the 2010 Deepwater Horizon Oil Spill and a number of tropical storms, according to the government announcement. It essentially acts as an argument for continuing to restore and protect the islands.

“The endangered Kemp’s ridley sea turtle has returned to nest on the Chandeleur Islands, highlighting the need to protect this sensitive habitat so it can continue to be home to ocean and coastal wildlife in the future,” Oceana U.S. Vice President Beth Lowell said, as NPR reported.

In addition to the Kemp’s ridley turtles, scientists also found evidence that threatened loggerhead sea turtles were also nesting in the islands, the state of Louisiana said. Loggerhead turtles were also the first turtles to nest along Louisiana’s coast in more than 30 years, when they were found on Grand Isle in 2015.

Even more nests could be discovered on the Chandeleur Islands as the agencies continue to monitor the area throughout the summer. Sea turtle nesting peaks in June and July and the young hatch 50 to 60 days afterward.

“We have a responsibility to protect the wildlife here, and that means creating safe and nourishing environments for these turtles and other animals that call Louisiana home,” CPRA Executive Director Bren Haase said in the government announcement. “It’s an exciting discovery, and we hope to see additional hatchlings emerging in the weeks and years to come.”

6 Must-See Environmental Films and TV Shows of 2023
Looking for something to watch? Check out these environmental films
By Linnea Harris
Biden Admin. Protects Minnesota’s Boundary Waters Wilderness From Mining
The Biden administration has taken steps to protect the most
By Olivia Rosane
Deep Seabed Mining Plans Pit Renewable Energy Demand Against Ocean Life in a Largely Unexplored Frontier
By Scott Shackelford, Christiana Ochoa, David Bosco and Kerry Krutilla
By The Conversation