End the Slaughter of Pilot Whales 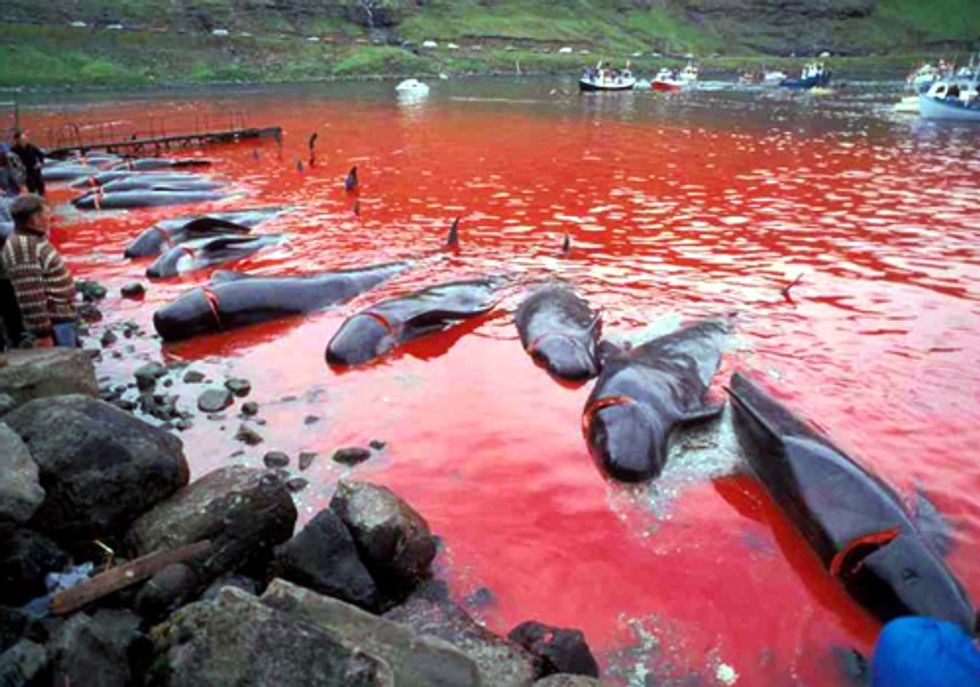 So far this year, 590 long-finned pilot whales have been killed on the Faroe Islands, bringing the total number of pilot whales killed since the beginning of 2010 to 2,423 and raising serious human health, animal welfare and conservation concerns. Photo courtesy of Environmental Investigation Agency.

The Environmental Investigation Agency and eight other NGOs have written to the Prime Minister of the Faroe Islands, Kaj Leo Johannesen, to express their deep concerns about the large number of pilot whales killed there this year.

So far this year, 590 long-finned pilot whales have been killed on the Faroe Islands, in the North Atlantic northwest of Scotland and halfway between Iceland and Norway, bringing the total number of pilot whales killed since the beginning of 2010 to 2,423 and raising serious human health, animal welfare and conservation concerns.

Meat and blubber from the animals are distributed and sold in the Faroe Islands for human consumption, despite evidence of high levels of mercury and PCBs. Long-term research undertaken by Danish and Faroese scientists has revealed that consumption of pilot whale meat and blubber has detrimental effects on the development of foetal nervous and immune systems, and increases the risk of Parkinson’s disease, hypertension, arteriosclerosis of the carotid arteries in adults and Type II diabetes.

The Faroe Islands’ Chief Medical Officer and Chief Scientist have jointly issued health warnings several times. In an open letter to the Government on Aug. 8, 2008 they stated that pilot whale should no longer be used for human consumption.

This conclusion was recently repeated in the 2012 review article Dietary recommendations regarding pilot whale meat and blubber in the Faroe Islands by Pál Weihe and Høgni Debes Joensen, based on additional long-term studies.

There is broad scientific agreement on the strong link between mercury in cetacean (whale, dolphin and porpoise) products and a variety of human diseases and medical conditions, including Parkinson’s disease, arteriosclerosis, immune suppression and hypertension. Threats to children include autism, Asperger’s Syndrome and Attention Deficit Hyperactivity Disorder (ADHD).

In July 2012 at its annual meeting, the International Whaling Commission (IWC) adopted by consensus a resolution proposed by the European Union IWC members including Denmark, requesting increased cooperation with the World Health Organization (WHO). It encourages the WHO to review scientific publications regarding contaminants in cetacean products and provide updated advice for consumers. It also urges governments to remain vigilant in responsibly informing consumers of the health effects associated with the consumption of polluted cetacean products, and taking steps to counter any negative effects based on rigorous scientific advice and clear risk assessments.

Unfortunately, the Government of the Faroe Islands has so far failed to adopt the recommendations of its own scientific experts to end the consumption of pilot whale, and instead supports continuation of the ‘grinds’ (the traditional name given to the style of kill in which whales are stranded and then slaughtered) and the consumption of these polluted whale products.

Indeed, if all the meat and blubber of the 590 whales killed this year is consumed, it will by far exceed the Faroese Government’s June 2011 guidelines which recommend a maximum of one meal per month.

Pilot whales tend to migrate to the calmer waters around the Faroe Islands to give birth from April to July. Pilot whale hunts frequently occur during the breeding season, despite there being agreement internationally that hunting during breeding seasons should be avoided to allow for stable populations to endure. For this reason, targeting animals accompanied by calves is expressly forbidden by the IWC—the world’s expert cetacean management authority.

The methods used to kill whales in the Faroe Islands have been subject to international criticism for decades. In the hunts known as ‘grinds,’ large family groups of whales are driven by boats into a bay where they are crudely killed with hooks and knives. Photo courtesy of Environmental Investigation Agency.

The status of cetaceans occurring around the Faroe Islands is uncertain in many cases and the impacts of the hunts which take entire family groups is also unknown. Pilot whales are protected under European Union law; many of the pilot whales occurring in Faroese waters also travel to European Union waters.

The methods used to kill whales in the Faroe Islands have been subject to international criticism for decades. In the hunts known as ‘grinds,’ large family groups of whales are driven by boats into a bay where they are crudely killed with hooks and knives. Pilot whales are known for their highly social behaviours and close-knit family groups.

Although Faroese authorities claim killing methods have improved, there is no documented evidence to prove this. The grinds are a lengthy process that also involves extreme distress for the whales associated with the chasing, separation of social groups and individual whales experiencing close family members being slaughtered. This is in addition to the inherent cruelty associated with the killing methods.

In conclusion and in consideration of the serious concerns raised, the nine signatory organisations—Environmental Investigation Agency, Animal Welfare Institute, Campaign Whale, Cetacean Society International, Dyrenes Venner, Humane Society International, OceanCare, Pro Wildlife, and Whale and Dolphin Conservation Society—have urged Prime Minister Johannesen, his Government and the Faroese people to bring a permanent end to the hunting of pilot whales and other cetacean species in the interests of human health, animal welfare and conservation.